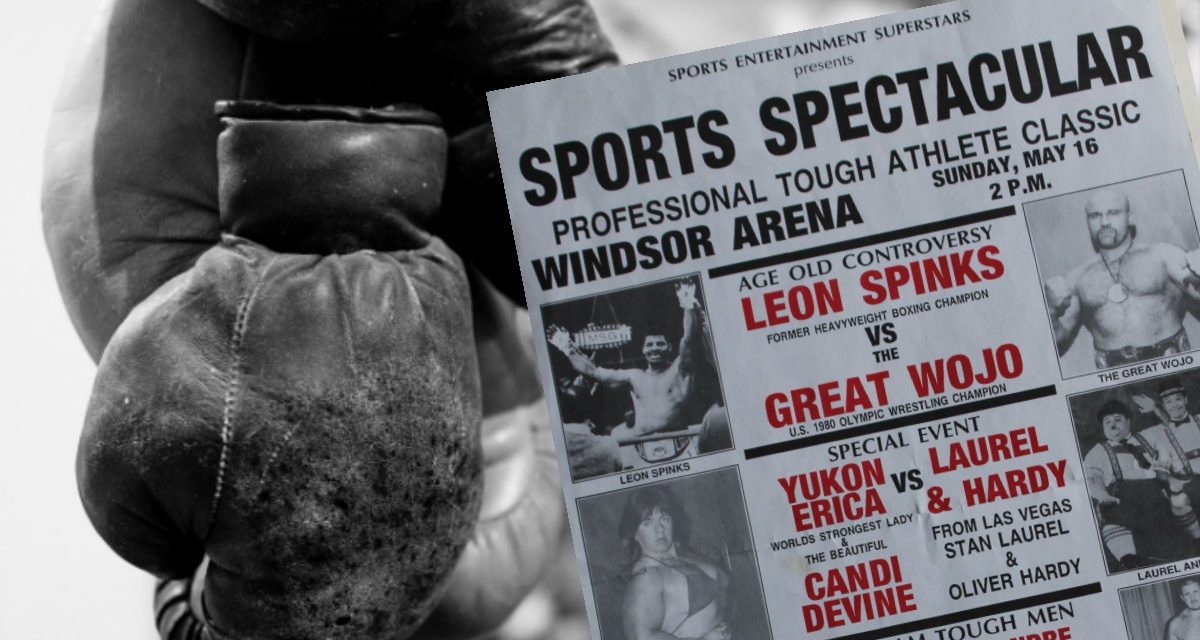 Former boxing world champion Leon Spinks — who surprised everyone by beating Muhammad Ali in 1978, has died. He was 67.

According to a public relations firm that represents him, he died on Friday, February 6, after suffering from prostate and other cancers for five years.

The many obituaries celebrating his up-and-down life make reference to his time in pro wrestling but offer little detail. Before we can get to that, it’s important to know how Spinks got there.

The 24-year-old Spinks only had eight pro fights when he upset Ali. Seven months later, Ali regained the World Boxing Association (WBA) title, and the World Boxing Council (WBC) title had been stripped from Spinks, for refusing to fight Ken Norton.

Leon Spinks won an Olympic gold medal in 1976 and defeated Ali for the heavyweight championship in 1978 https://t.co/Hx0PkL8xYp pic.twitter.com/fUvCsZLrHC

From there, Spinks was unsuccessful in challenging Larry Holmes for the WBC heavyweight title in June 1981. Next, Spinks dropped classes to the cruiserweight division, and competed until December 1995, finishing with a 26-17-3 (14 KOs) record.

“I was a poor young guy,” Spinks told the New York Daily News in 1997. “I never had nothing. All of a sudden I had something. I tried to do too much. I was crazy. I didn’t care about nothing. You think it’s never going to end.”

That quote, as much as anything, summed up Spinks’ need to make some money on the side, and professional wrestling was happy to have him in its ring.

The highest profile wrestler versus boxer bout was against Antonio Inoki in Japan, on October 9, 1986. According to the Wrestling Observer, the show at Tokyo’s Sumo Hall drew 11,520, for a gate of $837,158.40. In his Yahoo! Sports column, Dave Meltzer wrote about boxers in wrestling, including the Spinks vs Inoki bout:

Spinks’ 1986 match with Inoki had gigantic ratings on Japanese television, but was an embarrassment. Inoki was supposed to drop Spinks backward on his head and pin him, but Spinks went dead weight and both went down with no impact. Spinks then laid down for the finish and wouldn’t get up, since it was his time to lose. After the unconvincing ending to the match, Spinks got right up like nothing had happened.

Wrestler Johnny Powers gave credit to Inoki for expanding his brand recognition, including through another notorious bout against Ali from 1976. “Inoki used that as a platform for his going against various styles, fighting styles,” said Powers. “He went against Muhammad Ali, he went against some of the kick boxers, he went against Spinks, another boxer. He used that, and smartly so, to go into, to build a martial arts/pro wrestling/shoot-style, that he used as his calling card through Japan and the like.”

A photo from the Spinks-Inoki bout ran in many newspapers the day after, incorrectly noting that the Inoki-Ali bout took place in 1977. For the record, Inoki pinned Spinks in the eighth round. 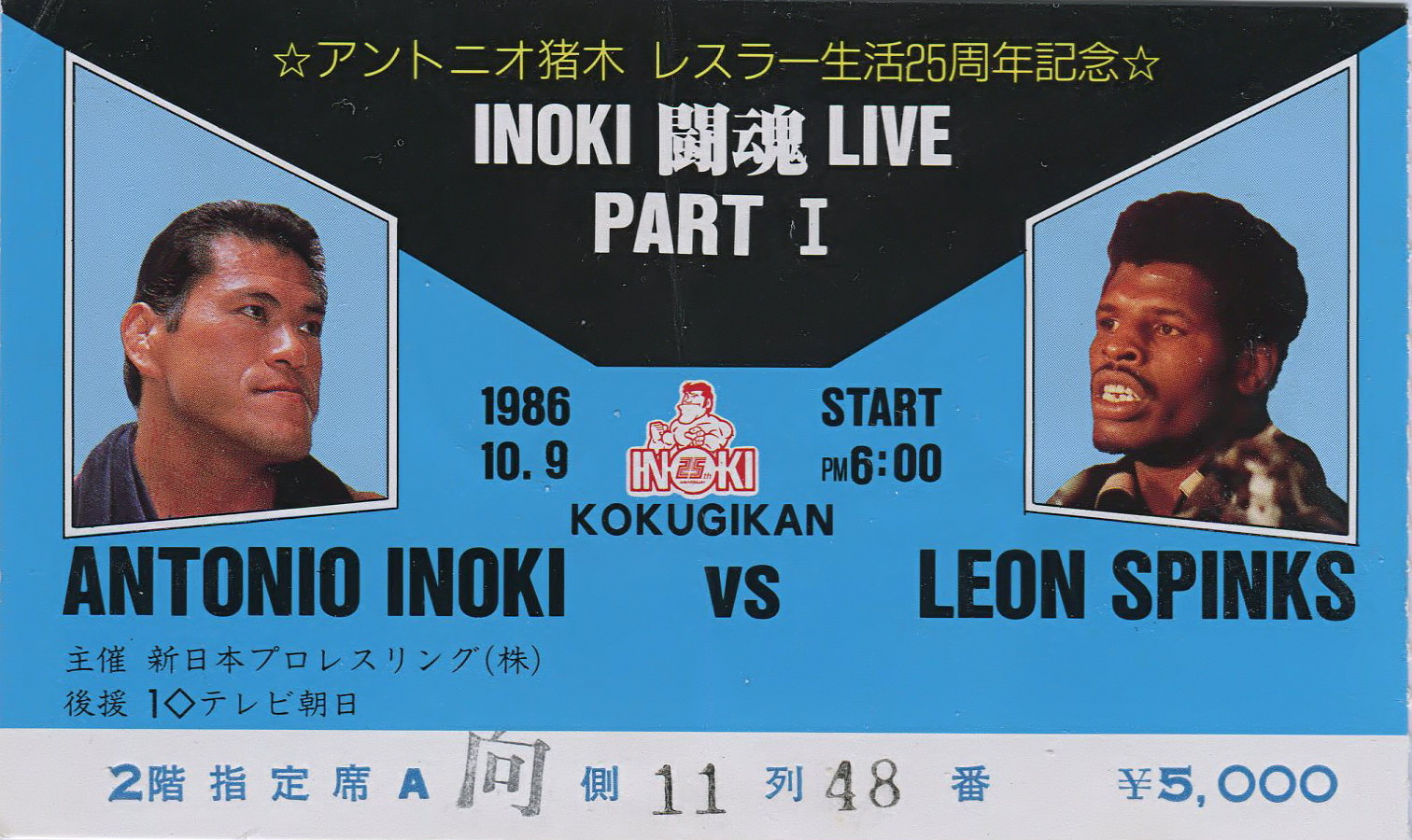 In a 1987 article in the Fort Lauderdale News & Sun-Sentinel writer Ira Winderman asked Marv Haupt, Spinks’ Detroit-based manager, about the bout in Japan.

“Antonio Inoki is a national celebrity over there, and he was celebrating his 25th anniversary in the wrestling business,” said Haupt. “So we signed Leon for three matches. We had the first one last year, and we’re going back for two more dates.

“I was shocked. They didn’t know enough English to say hello, but they certainly knew the name Leon Spinks. It was much more exciting than when (Inoki) fought Ali (to a draw in 1976). Leon got slammed and everything. It was a very exciting match.”

Another high-profile bout for Spinks in Japan, this time a mixed-martial arts affair, had him facing off against Gregori Veritchev of the U.S.S.R., who had been a bronze medalist in judo at 209 pounds at the 1988 Olympics. Veritchev got Spinks to submit to an armbar at 2:09 of the third round. (Veritchev later main evented for Frontier Martial-Arts Wrestling [FMW] in the early 1990s.)

Spinks himself did a number of appearances in FMW, including holding the wild, outlaw promotion’s Brass Knuckles Heavyweight Championship in 1992, beating Tarzan Goto on March 25, and losing to Atsushi Onita on May 24.

In the United States, two of Spinks’ bouts stand out.

In June 1990, Spinks was hired as a referee in Memphis territory. Naturally, this all led to a match later, on June 25th, where Memphis’ own Jerry Lawler won by disqualification.

But there was much more at stake, as recounted in the Memphis Wrestling History group on Facebook:

In a 1990 feud between Lawler and Snowman (Eddie Crawford) that was steeped in racism, Lawler had defeated Snowman in 3 consecutive title bouts at the Mid-South Coliseum. For their 4th consecutive match, boxer Leon Spinks had been appointed special referee by Eddie Marlin.
On June 18, 1990, the match took place. But when Lawler had Snowman pinned, Spinks refused to count, and even rolled Lawler off of him. Lawler punched Spinks in retaliation and Spinks punched him back, stunning the King, before performing a fast count to give Snowman the Unified World Title.

This led to an angry Lawler challenging Spinks to a boxing match on June 25, 1990, in which Jerry Lawler beat Leon Spinks by DQ in the 6th round. 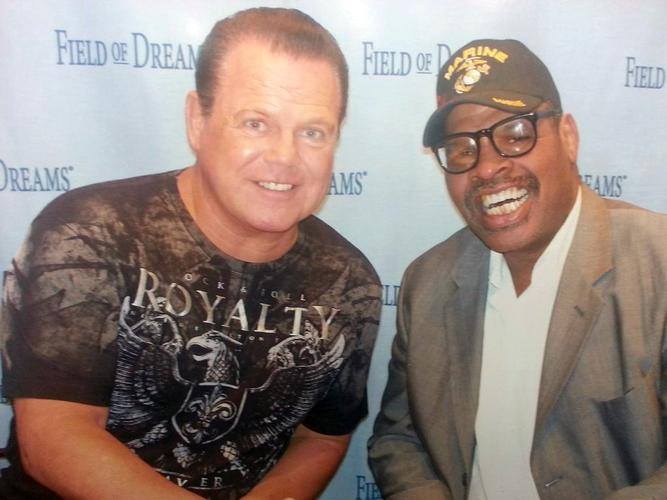 The Courier-Journal (Louisville, Kentucky) piece from June 1990 talking to Spinks focused mainly on Spinks’ attempted boxing comeback, and was dismissive of the wrestling participation — “Spinks played his part in an ironic parody at Louisville Gardens that, in a way, brought his career to a full, sad circle.” It goes on:

Spinks’ role in this production, aside from bringing in a few fans and picking up a few bucks signing autographs, was to referee the match in favor of The Snowman and outrage the crowd. After allowing his man to mistreat The King for much of the match, Spinks took a knockdown blow from Lawler, then got up to deliver a “knockout” punch to The King’s chest, uh, chin. The Snowman fell on top of the prone Lawler, and Spinks counted him out.

In its May 16, 1993 edition, the Detroit Free Press featured Spinks against “The Great Wojo” Greg Wojciechowski in a column by the paper’s “Great Wojo” Bob Wojonowski.

Jerry Graham Jr. was along on the interview as Wojciechowski’s manager, and ballyhooed, “Nobody will fight him! Nobody! Some Toledo businessmen even put up $1 million for Hulk Hogan to fight Wojo and he ducked him!”

Wojciechowski had the credentials to back it all up. Though he was 38 years of age at the time, and working as a school teacher, wrestling part-time, he had been a champion amateur wrestler, only denied Olympic glory by the 1980 boycott of the games in Moscow.

“I love the excitement of a fight,” Wojo told Wojo. “Like this one against Spinks. It’s great. I don’t have to worry about lawsuits or going to jail. I can just go out there and let my aggression out.”

The boxer versus wrestler bout took place in Windsor, Ontario, at the Windsor Arena. The two had actually fought a few years previously, on April 25, 1989, when Wojo beat Spinks in Toledo, Ohio — Wojo’s hometown.

“It could go 30 seconds; it could go all day,” said Wojciechowski. “Leon is dangerous, but I can take a punch. The last time I fought him, he hit me twice. I had a headache for four days.” 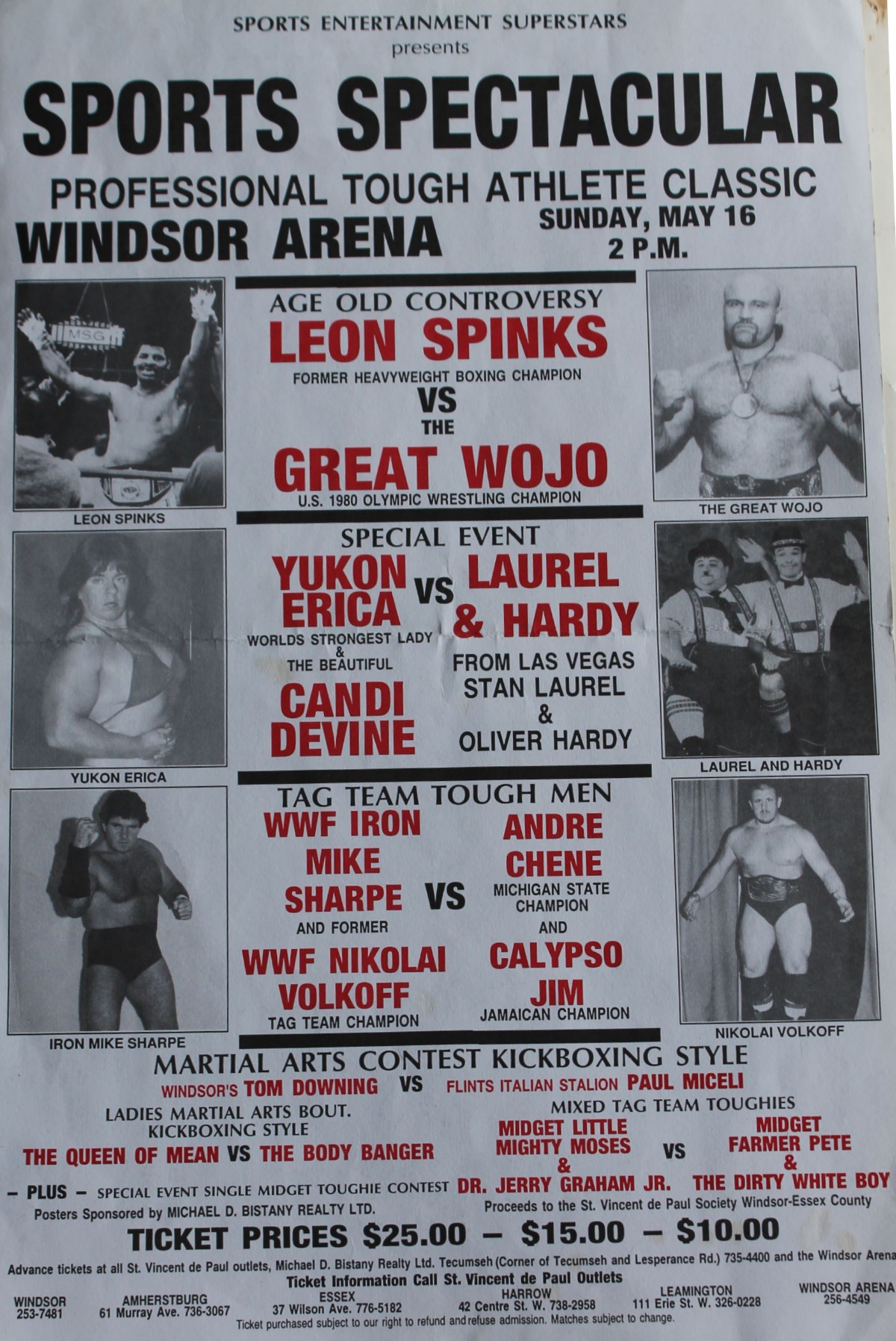 On some level, Spinks was drawn to pro wrestling.

After hearing of Spinks’ passing, Extreme Championship Wrestling (ECW) announcer Joel Gertner noted that Spinks once came to Philadelphia for a show.

Before we knew [it] Leon Spinks was in our locker room 1 night @ ECW Arena, Brian Pillman yelled at him & was kicking him out thinking he was unauthorized to be in the back.
Upon finding out it was Spinks, Pillman apologized profusely to him, saying “I’m •YOUR• MARK!”

Away from the ring, Spinks had financial challenges, run-ins with the law, automobile infractions from drunk driving to driving without a license, and did what he could to make do, from bartending to working as a greeter at Mike Ditka’s restaurant in Chicago. Health-wise, in 2014 he suffered intestinal damage and multiple surgeries when he swallowed part of a chicken bone. Prostate cancer was detected in 2019.

According to the release about his passing, Spinks died with his wife, Brenda, by his side.