“Fall seven times; stand up eight,” is an inspiring Japanese proverb about courage. 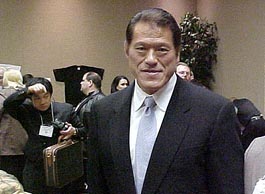 Antonio Inoki, a living legend in Japan who exemplifies courage — his nickname among peers, “Moeru Toukon,” translates to “The fighting spirit that burns” — is so revered that wrestlers actually request to be slapped in the face by the man in hopes of receiving some of his bravery.

Whether any of the wrestlers in attendance at this year’s WWE Hall of Fame ceremony in Phoenix, AZ, will ask to be slapped by Inoki, who is being inducted by Stan Hansen the night before WrestleMania, remains to be seen. As the founder of the New Japan Pro Wrestling (NJPW) promotion, Inoki’s matches with Hansen throughout the late ’70s and early ’80s were some of the bloodiest and most memorable battles in the history of Japanese wrestling. Inoki, however, was probably best known among North American fans for his bout with boxer Muhammad Ali that took place in 1976 in Tokyo — a rare wrestler vs. boxer match.

“He was a true innovator because he went outside the lines,” Stan Hansen recently told SLAM! Wrestling from his home in Waco, TX. “He would go to different countries to find different opponents around the world, and he was very innovative in that sense. And that match with Ali, Inoki was the one who put that together, and that had never been done before.”

Hansen was part of that historic event, as he fought WWWF champion Bruno Sammartino at Shea Stadium in New York, where the main event was the broadcast of Inoki vs. Ali from Tokyo via closed-circuit TV. And though by most accounts the contest was uneventful — Inoki spent most of the 15-round bout on the mat ground-kicking Ali’s legs — it paved the way for the advent of Mixed Martial Arts, which would skyrocket in popularity three decades later. 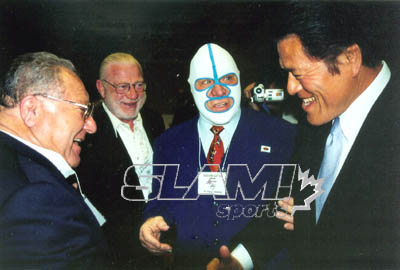 WWE Hall of Famer Jim Ross remembered it well: “I invested in the Tulsa closed circuit fight between Inoki and Muhammad Ali with (Oklahoma promoter) Leroy McGuirk,” Ross recently told SLAM! Wrestling in an email. “At the time, I only knew of Inoki being a huge star in Japan who was smart enough to start his own promotion, utilizing the growing TV marketplace to make him a star. Inoki exuded charisma, and his intellect and marketing abilities were uncanny.”

Over the course of the next two decades, Inoki built NJPW into the most successful wrestling company in Asia, utilizing talented Japanese competitors like Riki Choshu and Tatsumi Fujinami, along with innovative high-flyers like The Dynamite Kid and Tiger Mask. In addition, the young promoter brought in North American names like Bob Backlund, Hulk Hogan and Vader to build a promotion that was unique and ahead of its time. In addition to running NJPW, he was one of the company’s top stars as he carried the championship and battled the likes of Hansen, Hogan, Andre the Giant, Tiger Jeet Singh, and Ric Flair.

Many of Hansen’s favourite matches in his career that spanned 27 years with over 130 tours to Japan, were against Inoki either in singles matches or in tag teams, he said. “There’s are several that really stand out in my memories. He was a good scientific wrestler who knew a lot of moves and he was really quick. His punches came fast, he was quick to block, very competitive and all round great wrestler.”

Ross added: “(Inoki) was a great performer who became one of the top three Japanese wrestlers of all time along with Rikodozan and the great (Giant) Baba.” 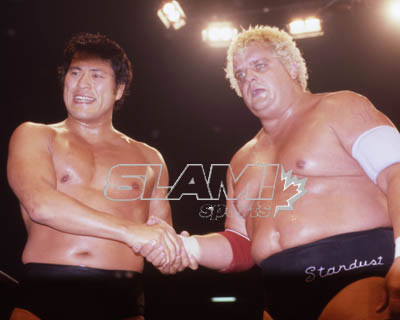 Hansen concurred: “There were two big stars in Japan when I was there, y’know, Inoki and Giant Baba, and I was fortunate enough to work for both of them,” said Hansen who made his mark in the rings of Giant Baba’s rival promotion All Japan Pro Wrestling. “Like Baba, Inoki was a household name and he even threw his hat into the political arena and got elected to their U.S. Congress’ top position,” said Hansen, referring to Inoki’s elected role to the country’s House of Councillors in 1989. During his time in office, Inoki represented his nation in meetings with the likes of Saddam Hussein and Fidel Castro. Hansen added, “Everybody in the country knew who he was.”

A brilliant self-publicist, Inoki is as famous in his homeland as Muhammad Ali is in the U.S.. It has also been said that as a cultural icon in Japan, his fame even overshadows Hogan’s in North America. Inoki even has his own brand of vitamin water, along with his own line of condoms decorated with his famous war cry: “DAAAAAH!” He is in the Pro Wrestling Hall of Fame (Class of 2009) and was honoured by his peers in the Cauliflower Alley Club in 2004, as the first recipient of the Lou Thesz Award, and previously in 1996.

That war cry still rings loud and clear as Hansen reflected on his violent feud with Inoki. “We wrestled all over, sometimes in tag matches where I’d team with Hogan and him with Bob Backlund. Or me with Dick Murdoch and him with Tatsumi Fujinami. I went there in January ’77 when Vince McMahon Sr. booked me for New Japan Pro Wrestling, and that’s when I first met Inoki.”

In the years to come, Hansen earned a name for himself all over the world, busting heads and bashing opponents and garnering a reputation as an unpredictable, tobacco-dripping Texas wildman, nicknamed “The Bad Man from Borger, Texas.”

In addition to places like Japan and Puerto Rico, Hansen also carved out a lasting reputation in North America with his brutally stiff Lariat clothesline that he used to once defeat “The Living Legend” Sammartino at Madison Square Garden, and further more break the undefeated champion’s neck. In the years to come, Hansen would travel the world winning numerous singles and tag team championships, along with the AWA World Heavyweight Title.

But it was in Japan where Hansen wanted to end his long and illustrious career, retiring in 2001 with an in-ring ceremony. “I miss Japan, I do miss Japan,” said Hansen. “I wrestled there all the way up to the very end. But I don’t miss wrestling.” And while Hansen is humble with regards to his own legacy, “It’s nice that some people remember me,” it was Antonio Inoki, he said, who changed the industry forever.

Recognized as an ambassador for professional wrestling, Inoki brought major events to countries like China and Russia. In 1995 in Pyongyang, North Korea, in the main event of a festival that drew one of the largest live crowds to ever witness a professional wrestling match, Inoki battled Flair. His retirement match in 1998 held at the Tokyo Dome drew more than 70,000 fans.

“Inoki had great vision and built an empire in a competitive genre,” Ross concluded. “Inoki’s legacy might be that his promotional abilities were stellar, not to mention he was a main event level star for decades. Inoki might be described as part Vince McMahon and part Hulk Hogan in that he was a promotional genius who created a lasting image of being a resilient hero.”

Hansen, the consummate heel, said while wrestling in Japan, his relationship with Inoki, “was strictly business.” But today, considers him a friend. “I feel honoured that they would like me to introduce him (and welcome Inoki into the WWE Hall of Fame Class of 2010).”