Back in the heydays of ECW, invariably one of the highlights of each show was Joel Gertner. Whether the self-professed Quintessential Studmuffin and “damn handsome man” would be out there reciting a decidedly-not-TVPG poem or sitting behind the commentary desk, he was always controversial, but most definitely entertaining. Fans in the Greater Toronto Area will get to see him back in action on Sunday, when Gertner will be appearing for the Demand Lucha promotion.

Gertner was named as the “Director of Demand” at the company’s last event, a role that he finds to be enjoyable and rewarding.

“It’s akin to the GM spot or the Commissioner spot,” Gertner explained to SLAM! Wrestling earlier this week by phone. “For lack of a better comparison, it’s very much like what Rockstar Spud does on (WWE’s) 205 Live show. I’ve done a similar role as a one-off for some companies (but what interested me about this) is that it’s long-term, and I’m committed to be at all of their shows at least through 2018.”

“This is the first time I’ve had the opportunity to be in this role in an episodic way,” he noted. “I’ve done it as a one-off for the occasional indy show, but nothing like this. Because now it evolves during the time when I’m at home between live events. I’m on the phone doing content, audio for social media, Control Centre stuff for their website to push storylines forward and to promote their live events, help draw business. It’s an entirely different thing when you know you’ve got a long-term contract to be at every show. It’s definitely something that I’d be very interested in doing for any promotion that thinks they can use me in a positive way.” 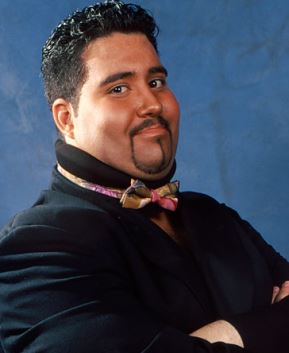 With his ECW experience, Gertner brings a lot to the company, both on-screen and off. And he’s happy to help do whatever he can to help the company elevate to the next level.

“Like with every promoter that books me, whether they like it or not, I’m helping out with the creative end. And it’s up to them whether they find any merit in what I provide. If they don’t, that’s cool by me. I always feel free to volunteer ideas, not just for me but for ail of the characters, the direction of the content, the production, and even business model stuff. I feel free to speak, and they’ve let me know that’s fine with them. I’m glad that in this case, we’re on the same page quite a bit.”

Indeed, if the company asked, he said he would also be willing to expand his role, if needed, to include acting as a manager or getting back behind the commentary desk as well.

In terms of manager characters, Gertner feels that wrestling is seeing a bit of a resurgence in their use, though with some evolution, pointing to the way WWE is using Paul Heyman as a spokesperson for Brock Lesnar, or the recent role Paul Ellering played in NXT for the Authors of Pain.

“The male manager, the non-wrestler who is there to help bolster the efforts of the wrestler they represent, I’m glad to see there does seem to be more of that than there was, say, 15 years ago. Which is not to discount the good work that female valets, spokespersons, advocates are doing. For example, Zelina Vega is doing unbelievable things in WWE as the spokesperson for Andrade (Almas) — and she can wrestle as well. But if the opportunity came across to manage a wrestler full time on TV, on the road, I’d certainly be interested, if it was clever and made sense.”

In terms of commentary, Gertner feels he brings a unique perspective behind the mic from many others.

“I can give the view of someone who has very limited in-ring experience. I did one or two classes at the Lower East Side Wrestling gym where I first started, when I was 16 back in ’91,” he explained. “I took enough classes to know what I knew going in, which is that this was not where my bread was buttered in this business, that it was not going to be my strong suit.”

“Where that helps me is that I learned how impossible it is to do what a wrestler does inside those ropes. When I’m doing colour commentary, say for a Sabu match, I can point out, ‘Hey, you, the guy who’s 20, 25 years old in your mom’s basement watching this match. Understand not only that Sabu’s twice your age. But also understand that the things that you think you might ever dream or imagine that you might be able to do, that you see Sabu actually doing, understand how far away those things are from your actual skill set. Because you probably could not even run the ropes or take a back bump.'”

Imparting wisdom is something that comes naturally to Gertner, and it’s in fact become his very own personal cottage industry in a few ways. Friends on his Facebook site will occasionally see Gertner commenting on the stock market, something that he studies carefully.

“I don’t have a stockbroker’s license,” he clarified, “so don’t have an official advisory business where I monetize giving out tips. (Rather) I’ve been giving away tips for free. And they’ve been successful, gosh, I’d say about 75% of the time. I don’t think you need to be that far about 50% to monetize it if you play your cards right. I’ve helped a few different people in the wrestling community — fans, wrestling historians, a few of the boys — who do invest already. I’ve given some great tips and I’ve helped some people make hundreds of dollars, some people make thousands of dollars. And there’s a joy in that. It’s like the same joy you get from teaching.”

Which he knows about from his other venture, as a teacher and tutor, specializing in math.

“One of the things I do is work at a local store of a mass learning centre franchise called Mathnasium. They’re based out of California, and in the States, there are about 600 or 700 shops. I do that after school. I’m a boutique tutor as well — I go to peoples’ homes and teach their kids directly. It’s fun, it’s easy, and definitely the reward is seeing a kid who had low grades in math, who weren’t a quote-unquote ‘math kid’, even seeing kids with legitimate cases of dyscalculia, who can now do math and do it well. It’s a labour of love.”

“There’s a real joy you get from doing something for the outcome, not for the income.”

It’s the same kind of feeling he gets when a company he’s working with finds success, creatively, financially, and critically. As for Demand Lucha, he believes the company has the ingredients to do well in all three areas.

“Demand Lucha is really an unbelievable product,” he praised. “It’s high-quality stuff that’s really super-creative and thought-provoking. The in-ring stuff is a great combination of some of the stuff you see on TV and some things that you don’t see on TV, with a good blend of the lucha libre style. With the relaunch from LuchaTO to Demand Lucha, it’s actually a good opportunity to get into this promotion, so you don’t feel like you’re just jumping on the bandwagon after it’s become the next big thing.”