MLW FUSION: A Banal Baklei Brawl for all 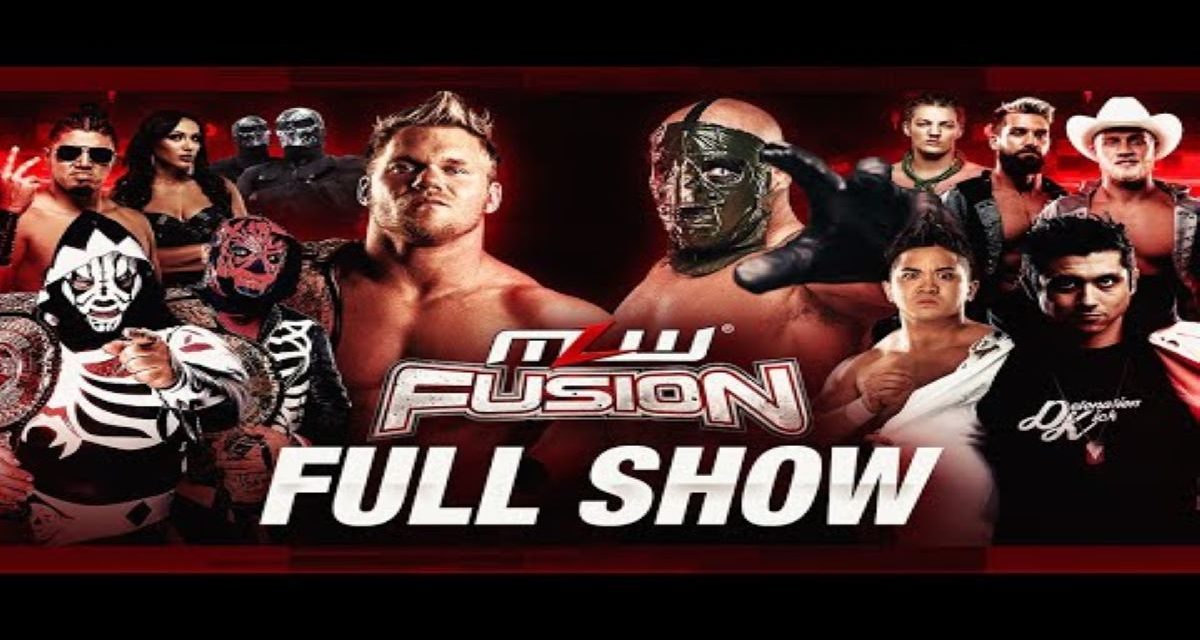 I’m on the fence if it’s going to be brutal to the men, or just brutal to watch.  And I have seen some brutal things to watch in my entire life, including “Meet the Fockers”, but we don’t have time to get into that.  For now we are live from the GILT Nightclub in Orlando, FL.

Your Commentators Rich Bocchini and Jared St. Laurent have the call. And it’s time for your … 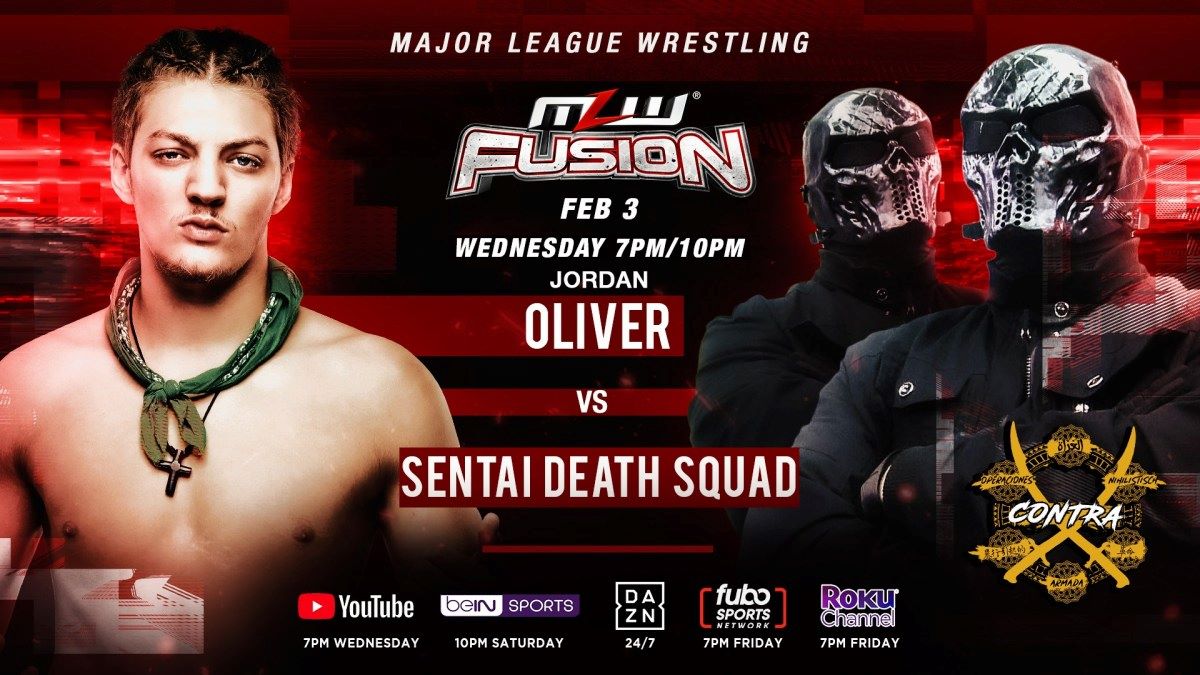 While Oliver has Myron Reed second him into the ring, Daivari leads in…just a masked guy.  OK, folks, I’ve seen enough episodes of “G.I.Joe” as a kid to know how this match is going to go, and knowing is half the battle.  Pretty much a one-sided affair, with a side of squash, as Oliver hands this guy his lunch.  End comes from Oliver delivering a sweeting looking top rope cutter onto The poorly named Death Squad member, and that all she wrote.

Your Winner via Pinfall:  Jordan Oliver

Oliver cuts a promo after the match, saying he’s not that 179 pound kid from last year, but he’s now at 220 pounds, and he wants to take that MLW heavyweight strap from Jacob Fatu. Aww, isn’t that’s adorable?

We then go to Salina de la Renta lounging with a glass of wine at poolside somewhere.  She talks about how sad it was that Savio Vega had lost the IWA Caribbean championship to Richard Holliday last week, and that IWA seems to be strapped for cash. However, Promociones Dorado will be happy to invest, and de la Renta says to Vega they sent an offer. Folks, if you believe that it’s going to be a good deal, I have some sub-Redditors that can take that offer to Wall Street.

Back to last week, and Bocchini and St. Laurent address the scandal with referee Tim Donoghy,(which you can find from the January 29th portion of our own News and Rumours), and intrepid backstage reporter Alicia Atout says that Court Bauer is investigating the scandal. She’ll get to the bottom of it when she interviews Richard Holliday next week.

We then head to the Von Erichs, and they are understandably upset that Filthy Island will make shore in Hawaii. They didn’t get the invite, but they are planning to show up.  Still…beats going on a COVID-cruise, or travelling to Provo, UT.

We get recaps of the tag match with TJP/Bu Ku Dao getting the win over Violence Is Forever to get the number one contender spot, which leads us tonight to your…

Introductions of Los Parks has Salina leading Los Parks to the ring, along with some weird shlub in a suit.  We get word from commentary that he’s probably there as an emissary for the group that now handles Azteca Underground that bought out Promociones Dorado, and I can’t help but think there may be shenanigans involved (or “Chanchullos”, as it is translated).

We get Dao and El Hijo to start, but the height of Dao becomes an issue when compared to the size of Los Parks.  Los Parks take full advantage of that fact and muscle the smaller Dao to their corner.  TJP objects to this, but gets cut off by the ref. While TJP Continues to get ref blocked, Los Parks cheap shot the virtuous Vietnamese wrestler.  TJP jumps in to put a stop to that, but Dao still get roughed up by Los Parks’ rudo style Lucha Libre.  El Hijo keeps up offense, but Dao answers back with a desperation clothesline.  The Elder Park tries to come to his son’s aid, but gets rebuffed by the ref, and now it’s TJP jumping in, shoving aside Dao and punches at EL Hijo.  He then gets Dao to cover the looped luchador, but he gets a two count.  Dao Tags TJP, and El Hijo gives a receipt to the Fil-Am Flash for his previous sneak attack, Tag to L.A. Park, and now Los Parks in full control double teaming the upstart contenders.

Pier four brawl, and Dao/TJP hit stereo pescados onto Los Parks from the ring to the floor, and finally TJP and Bu Ku Dao get back in control.  Back in the ring, and both Dao get in stereo submissions (Dao with a crossface on El Hijo, TJP with an Octopus Stretch on the elder Park), but Los Parks barely manage to power out.  From there, TJP uses the ropes for a slingshot pendulum kick on to L.A. Park on the outside to knock him out, while Dao uses the ropes to get El Hijo into a modified swinging flatliner to pin him, but the ref counts two.  El Hijo answers back by sending Dao to the corner and delivering a delayed dropkick, but he also gets a two count.  Meanwhile, Salina sees the gold slipping away, so she sends her weird shlub to the ring, while she climbs up to distract the ref with money (I’m assuming she thought she was making an offer to Tim Donoghy, because all refs look the same, I suppose).  While the ref was distracted, that was enough for said shlub to get the other Park member (I think L.A.Park, Jr.) who was under the ring to switch places with El Hijo.  Dao goes to cover, but the new Park gets up and hits a shoulder breaker to vanquish the valorous Vietnamese wrestler for the one, two, and three to secure the gold.  Like I said,  “Chanchullos.”

Your Winners via Pinfall:  Los Parks

As St. Laurent says astutely, “They’re called Los Parks. They’re not called Two Parks.” 2 Parks is also a great hip hop name for a crew, but I digress.  End had TJP upset at the loss, and Dao reaches out to his mentor asking for his forgiveness, but TJP smacks down Dao in frustration. Methinks problems are brewing with the new tag team.

Back to last week, when Laredo Kid beat Zenshi, and issued a challenge to anyone, including Lio Rush.  Well, we have the Moneyweight himself answering the call, and since he’s all about that gold, he proposes an interpromotional match; his MLW Middleweight title for Laredo’s AAA Cruiserweight title.  Folks, if you are not excited by this, then you are dead inside.  This is a #WatchHarder match if ever there was one.

Alicia Tout is now at Filthy Island Control Center. So the story is that sponsors had bailed, but we’ll go to “Filthy “Tom Lawlor.  Lawlor promises a great time at Filthy Island, and I captured the following statement on the screen below: 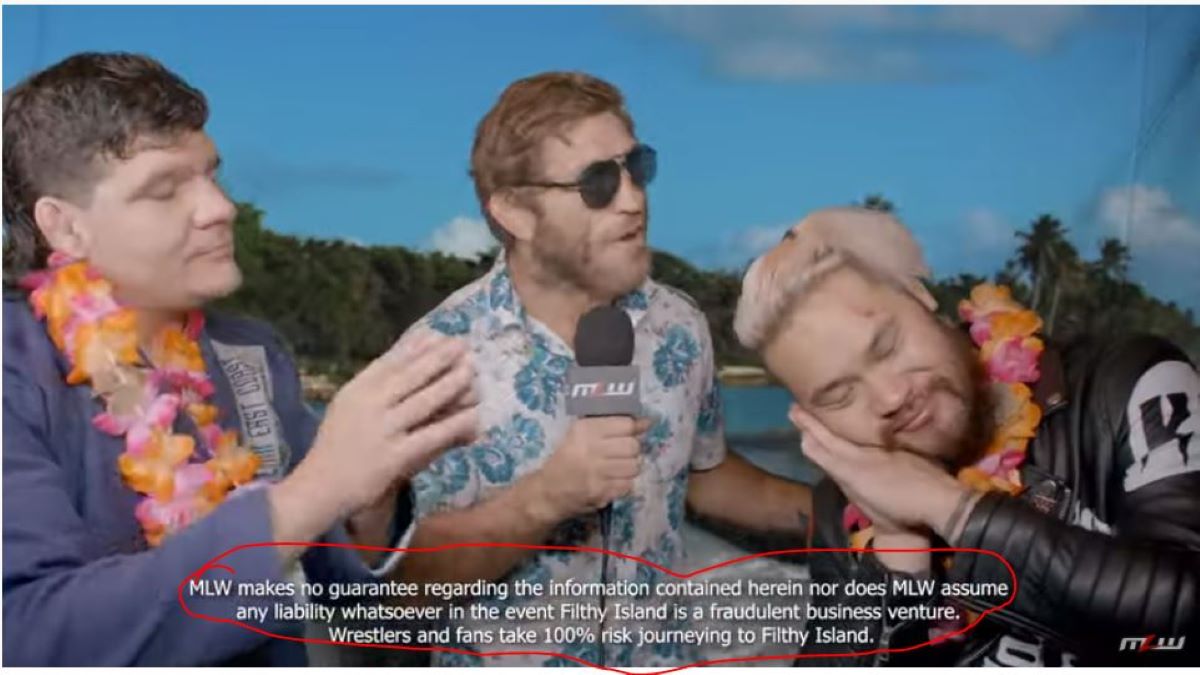 Atout mentioned what you can expect during Filthy Island, coming up February 17th, including King Mo vs. Low-Ki in a rematch from last year. But she sure won’t be there.  But you where we should be.  Watching the next match, which is…

Story of this match is how over the summer of COVID, Medina was no longer part of the Dynasty, claiming he quit, while Holliday states he was fired.  Let’s split the difference and say that Medina was “Fired/quit.”  Okay?  Got it?  Good.  Back to the ring, looking at Gringo Loco makes one wonder how he’ll keep up with “El Intocable”, seeing as how he doesn’t resemble a lithe luchador, but you don’t want to sleep on this Gringo.  Chain wrestling by both men, and Loco is able to keep up with Medina.  Medina then puts his hand behind his back, and manages to outwrestle Loco with one hand.  Loco one-ups Medina by sending “El Intocable” to the outside and punks out Medina teasing to leap out, but just lands on his feet.  Loco tries to gain the advantage, but Medina takes Loco’s legs out, and gets back in the driver’s seat.

Back and forth between the two luchadors, while Bocchini and St. Laurent remark that the owners of Azteca Underground are in the VIP suites scouting the talent in the ring.  In any case, Loco hits a beautiful twisting moonsault, but gets a two count.  Both men on their feet still trying to one-up each other, first with Medina hitting a spinning enziguri, and Loco answers with his own. Both are knocked silly, and Loco goes for the pin, but gets a two count for his trouble.  Loco goes back up for a moonsault but Medina gets the feet up, and this is all the advantage needed for “El Intocable.”  Roll up by Gringo Loco, but he can’t get the pin, as Medina reverses for the win

Afterwards, Medina cuts a promo stating he is “El Intocable”, and is El Campeón.  All of a sudden, Loco jumps him and they brawl out of the nightclub.  After that match, I’d definitely like to see the rematch between the two.

Plugs for Injustice vs Contra Unit and Lio Rush vs Laredo Kid for Next Week’s MLW FUSION.  But It’s now time for your…

So this is going to be a cinematic match between the two. Hammerstone is with a ref and a cameraman in what’s supposed to be Contra Unit’s backyard (which shows it to be a recycling center.  So, y’know, it’s nice to see terrorists wanting to save the planet and all).  Krügger shows up from a gate, and then both men start to slug it out, with gates and pallets being used, but your boy Hammerstone can’t put down the Black Hand of Contra.  End has Hammerstone managing to get the pin on Krügger….but, wait, that skinny so-and-so ain’t you man Mads.  While Hammerstone looks around, bewildered, the cameraman echoes what I was thinking the entire time, “Yo, we need to get the f*** out of here!”  But’ like any bad horror movie, Krügger pops up to lay out Hammerstone, and the feed cuts out on the show.

Your Winner:  Eh, call it a No Contest

Your Losers:  Oh, us!  Definitely anyone that saw this!

I am of the firm belief that if you end with a strong Main Event then the rest of the show carries onward.

This was not the case.  There’s nothing wrong with a cinematic match, especially in this day and age, but there is a world of difference between a match Like A.J. Styles against The Undertaker and…this.  It was as If the match was directed by Ed Wood.  The only thing that saved the show was the Tag Team Title match with Los Parks and Medina/Loco was a nice sleeper match that they should build on for the future.

Here’s hoping Zack Snyder can get his Director’s Cut of the Baklei Brawl uploaded for fans.  But until that day comes, see you in seven!