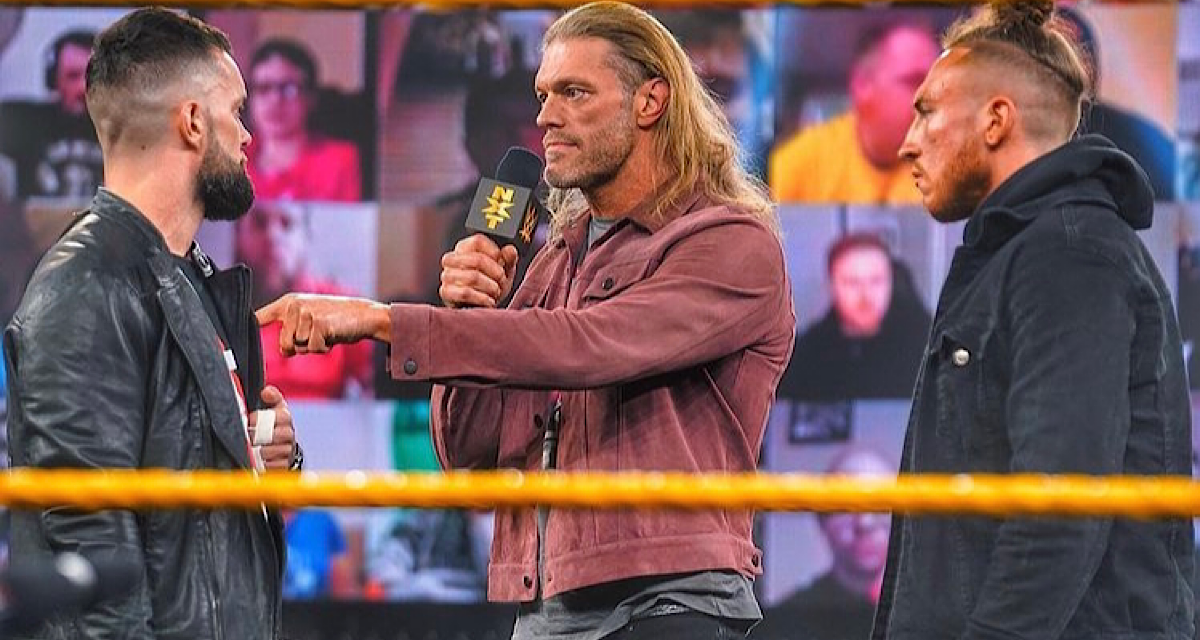 WWE Hall of Famer Edge’s return to professional wrestling and subsequent Royal Rumble victory last Sunday was pretty surreal. And between empty arena shows and tonight’s appearance on NXT television, the anticipated comeback run gets wilder with every story. The question regarding Edge’s appearance in NXT involves NXT Champion Finn Balor or whomever holds the gold this upcoming WrestleMania season. Will Edge choose the yellow brand for his deserved world championship opportunity? Announced earlier today, February 14th is NXT TakeOver: Vengeance Day, main-evented by Finn Balor and Pete Dunne for the NXT Championship; Edge will be watching!

The action quickly breaks loose, and Gonzalez rightfully uses her towering size to gain early control. Carter makes a comeback though and takes both opponents out, succumbing to ringside distraction before commercial. Catanzaro cleans house by diving off the lighting rig and delivering her top-rope dive, but Kai breaks the pin. Gonzalez ultimately regroups and plants the opposition, getting the pinfall victory. Judging by the noticeable hurricanrana botch and overall unkempt wrestling style by Catanzaro and friend, the right team won.

Toni Storm is interviewed backstage regarding her triple-threat title match at TakeOver: Vengeance Day. Of course, she vows to become NXT Women’s Champion.

The Way debuts some new poppy entrance music, and the transformation into campy heels is now complete. Theory works down Ruff, fellow WWA4 student, until the latter’s fast-paced comeback takes out The Way. Faction members Candice LeRae and Indi Hartwell attend to Gargano, but Shotzi Blackheart and Ember Moon make the save. While the referee is distracted, Ruff pulls an Eddie, and Gargano is finally thrown out. It won’t help, as Theory delivers the ATL for three shortly after. He attempts a post-match beatdown, but once again, Dexter Lumis foils his plan. This time, Lumis keeps some memorabilia: a patch of Theory’s hair.

During a video package of Legado Del Fantasma, Cruiserweight Champion Santos Escobar says, “The end is near,” presumably taking shots at Karrion Kross. Good thing this angle is stretching so long, it’ll take Kross some time cutting to 205.

Finally, NXT’s mystical Asian higher power gets named: Tian Sha. Her vignette is legitimately a samurai backstory with narrated animation, and apparently, this woman is thousands of years old. Has she met Damascus by chance?

Exciting action from the get-go with lucha things happening constantly. Lince Dorado receives the smooth hot tag “making the impossible seem effortless,” says commentary. LDF’s Joaquin Wilde delivers a double springboard arm drag, and afterwards the opposing Gran Metalik flips Raul Mendoza onto the floor. Dorado moonsaults atop the mass, but it’s Wilde and Mendoza’s double team that gets the victory. Would’ve loved more time on this! MSK, Nash Carter and Wes Lee, interrupts the post-match celebration with their quirky insults and whatnot; they’ll meet in the semi-finals next week.

Pete Dunne (with Oney Lorcan and Danny Burch) enters the ring, summoning NXT Champion Finn Balor. The latter wastes no time, granting his rival a championship matchup at NXT TakeOver: Vengeance Day. Directly after, the music hits… it’s Edge! The theme song, the composure, the circumstance, the man; the wave of emotions here is strong. Edge gives due credit to NXT — for both presenting “the second W” in WWE and restoring his passion for professional wrestling. He finds similarities in Dunne, praises Balor, and announces that he’ll be watching at TakeOver. Does Edge have sights set on Balor’s NXT Championship?!

North American Champion Johnny Gargano is interviewed backstage and receives the news that Kushida will challenge him at NXT TakeOver. Gargano takes offense and demands that this correspondent be fired by Mr. Regal. Except he’s preoccupied with Kushida, and the two competitors brawl across the corridor.

Kamea surprisingly gets some offense in, but Mercedes Martinez halts the momentum. The latter attacks Kamea and scuffles with Storm as Women’s Champion Io Shirai watches on. Shirai chooses her moment and moonsaults onto the opposition.

Much like Gamestop stock, Cameron Grimes is going to the moon! He returns next week from prolonged hiatus.

The champion takes control early as Scarlett looks on ringside — specifically from the afar platform. Stallion capitalizes on the distraction, but Escobar regroups with a back suplex onto the steel steps. The challenger eventually makes a comeback, properly suicide diving onto a fleeing Escobar and hitting a splash. But Escobar counters, delivers the Phantom Driver and finishing maneuver for three. Karrion Kross appears and rams through Legado Del Fantasma. He meets face-to-face with Escobar who smartly retreats.

Edge fist-bumps with Bronson Reed and exits the building. He’s approached by Karrion Kross who threatens his championship choice, ultimately saying that the NXT Championship, which he never lost, will be home once again. Edge isn’t fazed.

Amazing crop of talent here, starting with Adam Cole and Ciampa. They chain-wrestle and counter before tagging in their partners Roderick Strong and Thatcher, two catch specialists. The newer tandem gains control with no signs of betrayal, working together well against the experienced duo. Following picture-in-picture, Ciampa and Strong exchange strong strikes, and Thatcher continues applying pressure. But Strong reverses with a superplex, and Cole makes the comeback with an Ushigoroshi and Figure Four. After some friendly fire between the Era, the opposition double-teams Strong, and the action breaks loose outside; Thatcher is thrown over the barricade, but Ciampa capitalizes with Widow’s Bell for three! Stiff strikes, engaging story — great match and upset!

Edge appearing tonight made NXT feel important again, and tonight’s card followed suit. Obviously a fantastic closing matchup, and some solid action preceding it. The women’s division and midcard stuff is still iffy, but overall, with actual storylines thanks to TakeOver coming up (and Edge of course), tonight’s show was another improvement.