AEW Dynamite: A wedding and a new Bullet Club twist at Beach Break 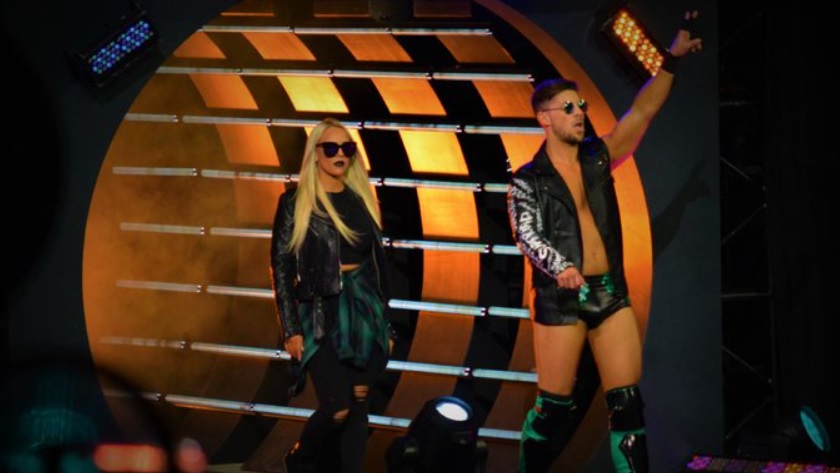 Ah, February, where thoughts naturally turn to the beach. Well, maybe in Australia, and also in AEW, which is making its themed Beach Break episode a tradition, It’s just hard to get in the proper mind set with 10 inches of snow outside my window. That said, I’m always willing to dream of someplace nicer, so bust out the sunscreen and tropical drinks, and tell your TV to turn to TNT as Dynamite is ready to go.

Announced earlier this week, FTR is out and Alex Reynolds and John Silver are in. That’s because FTR is suspended, though that’s almost certainly just a storyline reasons for the duo being out of action tonight. The Young Bucks are the first team to hit the ring, anxious to become their own top contenders. Just kidding, of course: If the Bucks win, they can pick their own challengers at the next pay-per-view. Fan favorite Silver is just getting talked up by the announcers when he gets thrown out, leading J.R. to muse, “Maybe I jinxed his ass.” Yep, maybe. The Good Brothers drop by and distract the Bucks, The final six men end up being Chris Jericho, MJF and Sammy Guevara on one side, with Jungle Boy and one man each from The Acclaimed and Top Flight on the other. Some surprises are still to come, including Max Caster eliminating MJF. Darius Martin, Guevara and Jericho are the final three, with Jericho eliminating former partner Guevara and Martin to ensure he and MJF will get the title shot at Revolution.

A montage of Jade Cargill working out is certainly impressive, but is she actually going to wrestle someone at some point?

I feel like Tony Schiavone tried to speak to Darby Allin and Sting just a week or two ago, but hey, let’s take another shot at it. Once again, Team Taz interrupts from the big screen since they apparently weren’t allowed in the building. Ricky Starks is the most vocal of Taz’s bunch, which is only right since he’s the best talker of that punch other than Taz himself. Sting objects to Ricky’s assertion that he no longer sees the Icon, imploring Starks to take a closer look.

A short video explores the beef between Dr. Britt Baker and Thunder Rosa, which they’ll settle, at least for now, in the next match.

I’m more than OK with this matchup, featuring two women who can really go and are near the top of the women’s rankings to boot. Baker taking bumps on the stage makes we wince a little just knowing how bad her injury luck has been. Despite getting her glove from Rebel, Baker can’t quite get the Lockjaw applied as Rosa has an answer for anything she tries. Rebel enters the ring to expose the middle turnbuckle, a move that pays off several minutes later when Baker smashes Rosa’s face into the metal, then gets the Lockjaw locked in. Rosa is out cold which is the same as tapping out in this case.

Schiavone speaks to Matt Hardy, who still claims to have no ulterior motives when it comes to Adam Page. Matt proposes some payback against Chaos Project by teaming up for one night only. As luck would have it, tonight is that night.

It only took an angle involving ruining a child’s birthday party to get Chaos Project on the main show. As the Avengers would say, whatever it takes. Speaking of whatever it takes, for Hardy to get the win, it takes Page doing most of the work and Matt tagging himself in to get the glory. As one does.

There’s a women’s world championship eliminator tournament coming up, and it’s a cool idea: There are two sides to the bracket, with matches taking place in both the U.S. and Japan.

An ecstatic Jericho and MJF blow off Alex Marvez and prepare to celebrate with the rest of the Inner Circle. Guevara doubts the Demo God’s assertion that they’re all in it together and storms off. Wardlow actually talks, suggesting that Jericho go check on him.

It appears it’s the moment we’ve all been waiting for, meaning time for Kip Sabian and Penelope Ford to tie the knot. Hilariously, James Mitchell is the presiding minister. Kip’s vows are the first I’ve ever heard that reference love at first sight including ogling the bride-to-be’s chest. He also hijacks Penelope’s vows, a very heel thing to do. We’re reaching the exchange of rings, which is already further than most pro wrestling weddings make it. Mitchell’s declaration of marriage includes the phrase “kayfabing all others,” which is funny, but not as amusing as Miro hustling the minister past the part where people can object, noting, “I’ve been there before.” Heh. A paranoid Miro unleashes his fury on the large present in the corner, then hears the fans launch into “What Is Love” by Haddaway. Charles Taylor shackles Miro in the corner, leaving him helpless as Ford gets knocked into the cake, from which Orange Cassidy emerges and drops the groom. That’s more like it for a wrestling wedding.

Shaq gave Cody Rhodes a preview of some of the moves he plans on using when they meet in the ring next month, and they’re … um, slow.

The thing about lumberjacks is they make a great target when someone jumps to the outside, especially if that someone is as large as Archer. They can also interfere, as Butcher and Blade attempt to do before Bear Country neutralizes them. That’s more than enough help for Archer to wrap things up.

Ah, here’s FTR to complain about their suspension and accuse Jungle Boy of “running to the principal’s office” to arrange it. Tully Blanchard is especially indignant. Oh no, they have Marko! Now its personal.

Joey Janela, who gets a shot at Allin’s TNT title next week, is feeling pretty confident about his chances.

Kenny Omega and The Good Brothers vs. Jon Moxley, Pac and Rey Fenix

Lots of time left for this six-man main event, which is promising. Slightly less time remains after all the entrances, but still. Perhaps unsurprisingly, Don Callis makes himself at home with the announcers to call the action. The juice is really seeing Omega and Moxley in again together, but we haven’t seen Pac nearly enough in recent months so it’s great that he’s involved. The rapid fire final few minutes have numerous highlights, including Fenix flying insanely far to the outside and a bunch of people stealing each other’s signature moves. Fenix ends up as the wrong man in the wrong place, and the Magic Killer ensures he stays down for three.

Winners: Kenny Omega and The Good Brothers by pinfall

The Bullet Clubbers want to get in more shots after the bell but run afoul of Archer, who relishes the chance to beat on the Good Brothers. As Moxley crawls toward Omega with thoughts of some payback, he’s attacked by a masked man. The mask comes off to reveal … Kenta, the man who just so happens to have a contract to face Mox for his NJPW belt. That adds another fun layer of intrigue to the cross-promotional angle, and while it was rumored a while back, I admit I sort of forgot about the idea in the interim. I love it, though. See you in seven!

This show felt a little uninspired until the final segment, which was the best match of the night and offered an intriguing if not entirely unexpected twist to the cross-promotional web AEW, Impact and now apparently NJPW are weaving. Maybe Omega isn’t leading a Bootleg Club after all, eh? Intrigued to see what’s next.