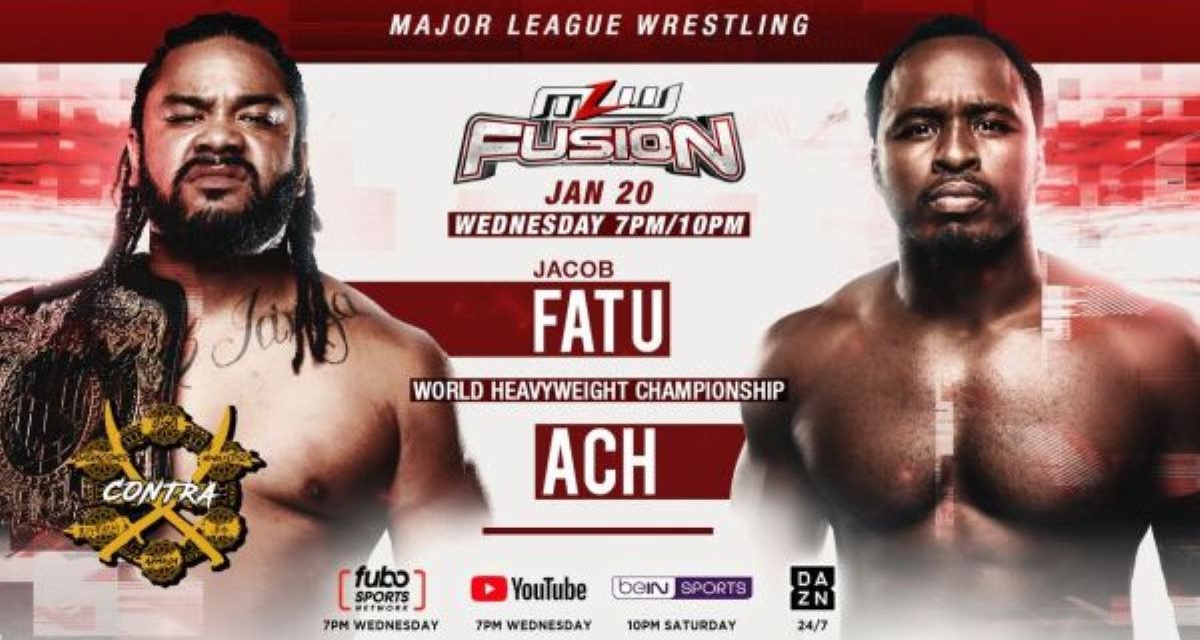 There are things I’ve learned in life never to do:  tug on Superman’s cape, spit into the wind, deal with crazy women from Provo, UT, and mess with angry Samoan Smashing Machines.  Apparently, ACH hasn’t learned that lesson as he takes on the reigning MLW Heavyweight Champion, Jacob Fatu.

But wait!  We get a cold open where your commentators Rich Bocchini and Jared St. Laurent give us “breaking news” as it was discovered that ACH attacked outside gym. Who coulda done it?  Was it Contra Unit? Team Filthy?  Waitasec…anyone know where Taya Valkyrie was that night?

Well, we’ll follow that story as it develops because now we’re live from the GILT Nightclub in Orlando, FL. And it’s on to your…

If this is your first time seeing Daivari, and if you haven’t been following him in matches like in UWN Primetime Live (cheap pop), then I’m here to tell you that he is still jacked and looks like a well-oiled machine, compared to Zenshi.  Start of the match had great aerial moves by Zenshi, but Daivari keeps things grounded for the high flyer from Santiago, Chile.  Daivari shows off his power by hitting a sickle clothesline that knocks wind out of Zenshi, and he follows with a back body drop, but gets a two count.  Rest of the match had Daivari methodically breaking down Zenshi by working over the arm.  Best move had Daivari hit a nasty hammerlock slam on the ring apron edge to Zenshi, who is really feeling the effects of Daivari’s offense.  But don’t count out the Chilean, as he takes advantage and grabs Daivari’s head and proceeds to ram it into the top turnbuckles on each side of the ring, and then uses the ropes to hit a wonderful slingshot cutter.  Too bad it gets him a two count. Zenshi gets back and hits a seated senton, and then goes for a 450 splash, but Daivari gets his knees up in time to knock the wind out of Zenshi’s lungs.  Daivari ends things with a hammerlock short arm lariat, and that ends it emphatically.

Your Winner by Pinfall:  Daivari

We then cut to Myron Reed, who’s spitting and and spitting facts. Jumping that Young GOAT was a big mistake and he promises that Contra Unit will gets some much deserved justice. Just wait. Okay, I’ll wait and see what ya got, Myron.  I got nowhere else to be.

We head down to Puerto Rico with Savio Vega, who’s upset that Richard Holliday still has the IWA Caribbean championship after he stole it from him early in 2020 (See folks? last year was hard on everyone, including Caribbean wrestlers). But Savio has a solution: a Caribbean strap match, and he gives everyone a history lesson as he deep dives into the last time he used it was a match against Stone Cold Steve Austin. Well, Color me interested.  Let’s see how Holliday reacts to this stipulation.

But we’ll get into that later, because we now have a … 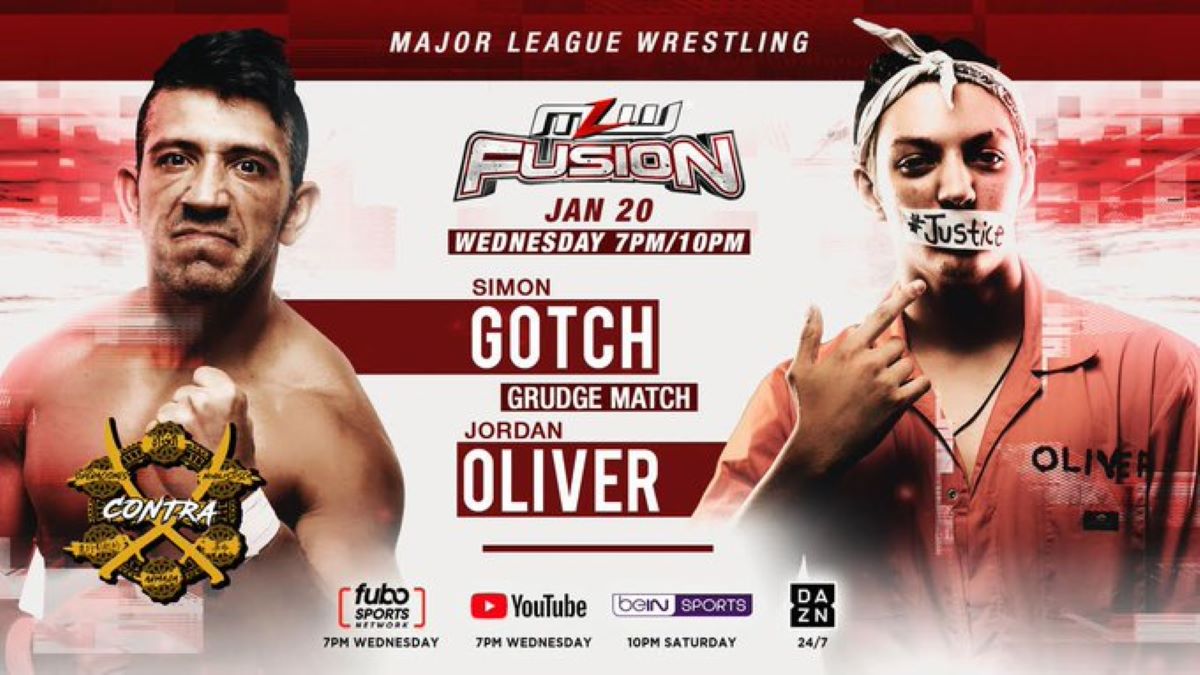 This was supposed to be part of the Kings of Colosseum show two weeks ago, and instead Gotch, along with Fatu and Daivari, jumped on Injustice.  Finally we get the match, and it’s a slugfest from the word, “Go.”  I should also point out that if you just remember Simon Gotch from his VaudeVillain days from NXT days as a comedy act, dispel those thoughts right now, because he has turned into a hard hitter.  As if to prove my point, Gotch delivers a Saito suplex that sends Oliver to the outside of the ring.  Gotch keeps up the hurt with an elbow drop from the ring apron to the floor, and oh my goodness Oliver is hurting.  He sends Oliver back for a pin, but just gets a one count.  Gotch is in full control and shows off some nice moves in an arm breaker and heel hook submissions.  But Oliver isn’t laying down just yet and gets in a hope spot by running the ropes for a Shining Wizard on Gotch, but it gets a two count.  Oliver keeps up the momentum and makes Gotch eat a running boot, but alas…another two count.  Oliver gets frustrated and goes for a high risk maneuver, but Gotch catches him in a sleeper hold, and good night, nurse.  Oliver is off to bed.

Your Winner via Submission:  Simon Gotch

End of the match had Gotch punctuate his win with a cradle piledriver to add insult to injury, and he smiles at his handiwork.

Alicia Atout interviews Team Filthy, comprising of “Filthy” Tom Lawlor, Dominic Garrini, and Kevin Ku, asking the hard hitting questions on what happened to ACH, but Tom Lawlor wants to talk Filthy Island. He ain’t got time for ACH, so he can kick rocks for all he cares.

This leads to clips on last week’s show where we found out that Promociones Dorado acquired from Salina De La Renta. But you can catch up here:

Alicia is backstage and asks de la Renta who acquired Promociones Dorado, but Salina ain’t having nada, and she wants to only talk Mil Muertes and get gold going for her brand. So far, Alicia is 0 for 2, but she is gonna investigate further.  Gotta love the tenacity.

Back to the Hammerstone and Mads Krügger match from Kings of Colosseum show, and Krügger cuts a promo promising to be Hammerstone’s demise.  He’ll finish what was started. This will lead to a Baklei Brawl. Supposedly it’s got origins in South Africa as a bare knuckle match, because, y’know, a “No Holds Barred” match sounds so basic.  But add words like “Baklei Brawl” just makes it Fancy AF, as the kids say.  Personally, I’m curious how much of South Africa are they going to bring into a Baklei Brawl, and I wonder if Trevor Noah of “The Daily Show” will be a guest referee.  But, I digress.

Meanwhile, Alicia is earning her salary, and states ACH had positively ID’ d Garrini of Team Filthy in the beat down, but he is ready to go for his Title match tonight.

Richard Holliday responds from “Martha’s Vineyard” to Vega’s challenge and to the contract sent to his lawyer “slash” father, and he’s ready to whip Vega and leave welts on him to ensure who is the rightful owner of the Caribbean champion. That’s all on next week’s show. But now it’s time for …

ACH enters first, grimacing from the “attack” earlier in the week coming to the ring, and Fatu enters with Contra Unit death squad members flying the black flags of Contra Unit, with Daivari in tow.  Before I could utter “What in the name of Umaga?!” and the match starts with Fatu just laying in a vicious beat down.  This is just a one sided affair that does not favor ACH, both from his previous injuries and Fatu’s ferocity.  ACH gamely tries and hits a dropkick, but can’t follow up. Fatu heads out of the ring and ACH goes flying outside, but Fatu catches him and rams his injured ribs into the ring post.

Fatu keeps up the barrage of violence, using the ropes for a seated senton to further damage ACH’s ribs.  ACH tries to power up, but gets a wicked Samoan Drop by Fatu for his trouble.  ACH is sent into the corner for Fatu to deliver a running hip attack, but ACH dodges at the last minute.  With Fatu stunned, ACH tries a body slam, but his ribs and back are just killing him.  Fatu goes to a nerve hold and then follows with a head butt leaving ACH prone on the mat.  Fatu sends ACH to the corner as he goes for a diving seated senton.  Once again, ACH dodges as Fatu gets his…errr, little Contra Units caught on the middle turnbuckle.  The tide turns as ACH powers through, and sends Fatu to the outside and lines up for a wicked punt kick, and Fatu feels it.  Alas, ACH suffers the effects in his toes as well, but onward he perseveres.  Fatu gets sent back in and ACH uses the ropes and gets a beautiful slingshot cutter that drives Fatu through the mat.  Now ACH turns up the offense, but tries to lift up the Samoan Smashing Machine but it’s too much for him.  Fatu had enough of this, and catches ACH with a pop up Samoan Drop, and a moonsault, and that all she wrote.

Fatu has the mic, and states Contra Unit is here to stay. Daivari has more to add as the nest member, but the death squad members use the flags to get the drop on them.  Gotch and Krügger try to make their way to help, and …wait, it was Myron Reed and Jordan Oliver.  The Injustice members get the last laugh at Contra Unit, giving them a taste of that promised justice as we fade to black.

Mostly a Contra-centric show, but that isn’t a bad thing as it really highlights their stable’s dominance in MLW, and it was great to focus on Daivari’s and Gotch’s strengths throughout their respective matches.  Of course, every villain needs a hero, and Injustice may be the unlikeliest heroes yet, but this push can only help them down the road and step up as major contenders.  We’ll just have to see who can rise to the challenge of Contra Unit.

Until then, See ya in Seven!