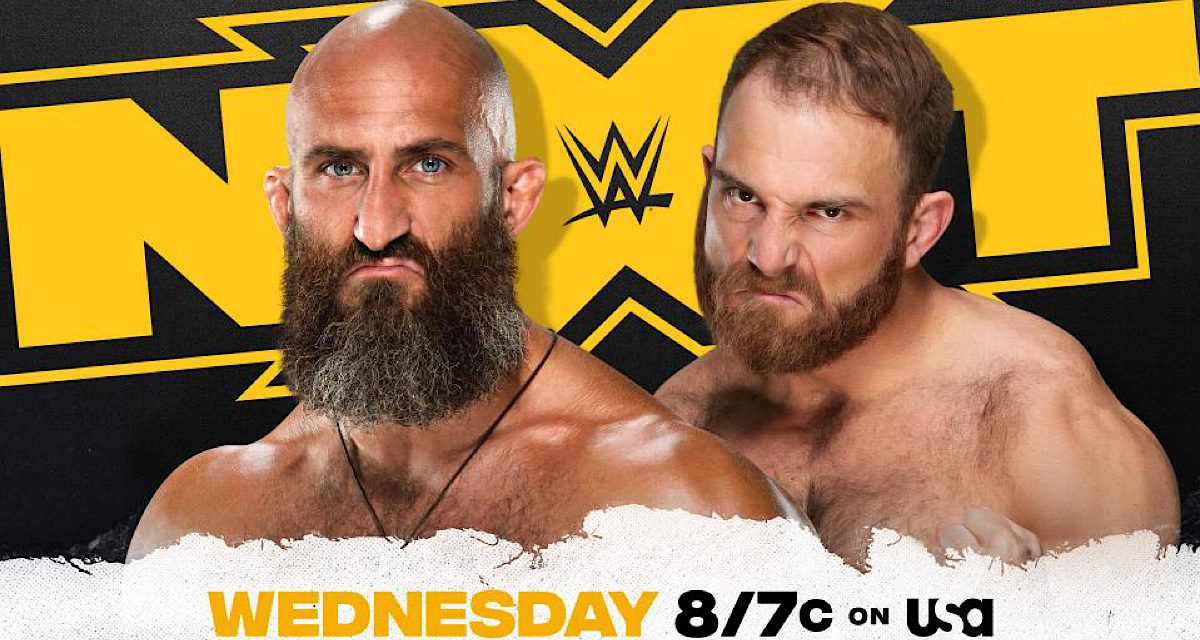 The 2021 Dusty Rhodes Tag Team Classic tournament continues after a solid opening show last week. Tonight, the inaugural Women’s Dusty Rhodes Tag Team Classic Tournament begins — something zero doctors ordered. But, keep those doctors around for tonight’s anticipated main event as Tommaso Ciampa and Timothy Thatcher do battle inside the returning Fight Pit! It’s the climax between two rough and tough rivals trying to prove each other’s superiority, knockout or submission only. Beforehand though, some tag team action is about to commence.

The Way’s Austin Theory looks humongous in comparison to both Johnny Gargano and the opposition, yet Ruff Hour gains the opening advantage. Momentum shifts with Theory’s great rolling dropkick until Ruff makes the comeback, eventually being caught by his opponent’s powerbomb. Once again, picture-in-picture is solely dedicated to heel heat, and The Way’s few minutes of control here check the box. They double-team a resilient Ruff for two before the underdog hits a springboard cutter, then making the hot-tag to Kushida. After some chaotic back-and-forth, Kushida applies a unique arm-tied suplex for the victory. Ruff Hour 2 is forthcoming!

Time isn’t wasted with Kross, quickly hitting consecutive Doomsday Saito suplexes. He delivers the finishing running forearm for three. As the medical team and partner Desmond Troy checks on Adonis, the victor brings Troy inside and locks him into the Straight Jacket submission. Kross and Scarlett’s dramatic entrance was probably longer than this.

NXT’s newest tag team of MSK, the former Rascalz, get a video package highlighting their athleticism and backstory. Nash Carter does some comedy, reminiscent of the Rascalz treehouse segments back in Impact Wrestling.

The former duo makes periodic attempts at ‘some good lucha things’, but Imperium keeps them grounded. Fabian Aichner catches an outside dive from Lince Dorado, and with partner Marcel Barthel, delivers a double-team maneuver before break. Gran Metalik eventually receives the hot-tag, bouncing off the ropes and diving onto the opposition; both teams interrupt some near-falls until Dorado connects with the Shooting Star Press for three. The obvious style clash created such a lethargic, awkward showing. And afterwards, a mild return from Imperium’s Alexander Wolfe fared about equal.

General Manager William Regal and Beth Phoenix present the inaugural Women’s Dusty Rhodes Classic, first listing off some women stars that wrestled in NXT. All competitors are standing atop the stage, and the four upcoming wrestlers make their way ringside. Somebody should’ve blindsided somebody for the easy upper hand, but oh well.

Martinez beats down Catanzaro and delivers a powerslam before break, and just to mention, the light capacity of fans sitting ringside are currently rather quiet. Either that or Carter’s apron coaching is super loud. Things escalate when Catanzaro reverses with a top-rope hurricanrana and subsequently makes the hot-tag, but Storm suffocates the offense with a headbutt. On the outside, NXT Women’s Champion Io Shirai takes out rival Martinez while Catanzaro hits a rotating dive onto Storm for three. Wikipedia tells me that Catanzaro is 95 pounds; best wishes, Toni Storm.

NXT Champion Finn Balor storms Regal’s office and demands a matchup with Pete Dunne. Wasn’t Dunne the guy recently staking his claim at gold? Cutting to the hallway, Isaiah “Swerve” Scott approaches Bronson Reed before his upcoming bout, telling him to stay out his business.

Winners Catanzaro and Carter are pumped up, once again stating that they’re “winning the whole thing.” After tonight, it’s obviously not impossible.

Big Bronson Reed really impresses with speed and intensity, thereafter showcasing some monster strength with a fallaway slam. Meanwhile, picture-in-picture, Io Shirai and Mercedes Martinez are brawling backstage with officials pulling them apart. Reed gets stuffed atop the turnbuckle, and Rust capitalizes with a Samoan drop. However, Reed counters his finisher with a Senton and delivers the Tsunami Splash for three. Big man looks great!

Next week, Oney Lorcan and Danny Burch face Finn Balor and a mystery opponent. The latter enters the Undisputed ERA’s locker room and asks Kyle O’Reilly for the partnership. Animosities are still high, but O’Reilly shows some respect and acknowledges Balor as “champ”.

Finally, the long-awaited Fight Pit matchup between Tommaso Ciampa and Timothy Thatcher is underway. It’s unfortunately the only worthwhile segment on this episode. Let’s get started!

Well, apparently not yet. Santos Escobar issues a challenge backstage to Curt Stallion for the NXT Cruiserweight Championship. They’ll compete for silver next week.

Introductions are made with both competitors standing across the platform; great visuals here with the dark lighting and unique camera angles. They spend the opening minutes brawling and scuffling as Ciampa slingshots his opponent into the protective rails. Not-so-great timing as picture-in-picture hits before both fighters actually enter the pit. Ciampa knees Thatcher into the steel for six — pinfalls aren’t allowed, only submissions or knockout, but the latter regroups with a Kimura and Sleeper. To break out, Ciampa hits a perfectly legal low blow, thereafter delivering Willow’s Bell with the referee’s back as leverage; smart trick considering there aren’t ropes. They trade heavy blows until Ciampa connects with the Fairy Tail Ending and Sleeper Hold, but Thatcher escapes with the same. Finally, Ciampa gets wedged into the corner as Thatcher targets the injured knee with a Stretch Muffler for the tapout victory.

After the conclusion of a rivalry based on toughness and respect, these two delivered on it. Thatcher eyes Ciampa, and evidently, they’ve gained one another’s respect.

Gotta give credit to Thatcher and Ciampa for putting up a good fight. Although it didn’t match the initial Fight Pit bout from last year, tonight’s bout deserves its own props. Regarding the remainder of this show… there was so much momentum coming off of New Years Evil and last week’s great episode, and tonight… tonight was lifeless and uninspiring. Save yourselves the time.