AEW Dynamite: The Inner Circle picks its tag team within the ropes 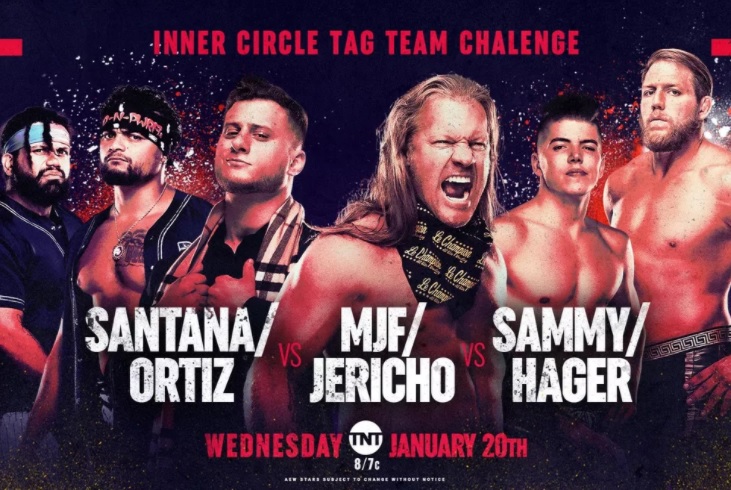 It was a day of peaceful transition of power in the U.S., but things figure to be a little more tense tonight on AEW Dynamite. For starters, the Inner Circle has been unable to determine who would be the faction’s “official” tag team, so they’re settling it in the ring with a three-team challenge. Plus it’s decision time for a certain cowboy as he needs to choose whether to join up or keep going it alone. No time to dally then, let’s away to Daily’s Place to see what transpires.

It’s birthday party time! Brodie Lee Jr., better known now as -1, is the birthday boy, and he’s getting more than just a cake. John Silver can barely contain his excitement over the Dark Order’s “handsome cowboy recruit,” as he is already anticipating Adam Page joining them. The effervescent Silver leads his teammates in the birthday song, but since this is wrestling, it’s only a matter of time before some rude heel or heels play party crasher. It’s Chaos Project in this case, and Luther makes it clear they do not like children. TH2 comes out as well, there’s a small melee, and then a match materializes out of it.

With so many wrestlers in one match, it occurs to me that it means more targets for moves to the floor. Sure enough, we get some of that. Page shows some nice chemistry with the Dark Order peeps, but will that be enough for him to join up? To be determined. That cake is still looming up on the stage, and because there is some unwritten wrestling rule that says someone must be smashed into any cake, Luther is the one who winds up as the victim thanks to a kendo stick shot from -1. Page hits the Buckshot to seal the win for his team, and -1 ends up subjecting Serpentico to some abuse as well.

Of course there’s still the matter of Page’s big question, and Silver isn’t about to let it go unanswered. Despite the Dark Order having a huge celebration ready to go (which starts off prematurely), Page declines the offer, reasoning that despite all the fun he’s had with Dark Order, he’s tried the team thing before and it didn’t end well for him.

As he does, Alex Marvez takes his best shot at getting his questions answered by MJF and Chris Jericho. They ignore him, but we do get Jericho’s assertion that no matter who wins the intra-Inner Circle tag team match tonight, it won’t cause lasting dissension in the faction. We’ll see, I suppose.

Tony Schiavone is in the ring with a microphone, which can only mean it’s time for Sting to arrive. His purpose tonight is to congratulate Darby Allin for retaining his TNT Championship last week against Brian Cage, and he’s wearing a Brodie Lee tribute shirt to boot. The Stinger barely has a chance to say congrats to Allin before he’s interrupted by Taz and his group. It seems he is challenging Allin and Sting to a street fight of some sort, to which Darby responds “be careful what you wish for, because it just might happen.”

Earlier today, Marvez crashed a meeting of the Elite at Kenny Omega’s house. where the Young Bucks discover an oil painting of the AEW champ and an unusually buff Don Callis. The Impact intruder also has some bad news for the Bucks: Omega was unable to attend, and they also don’t have Kenny’s current phone number. As Michael Nakazawa escorts poor Marvez and the camera guy to the basement, Callis attempts to buy the Bucks out of their friendship with Omega. We never see how it ends for Callis, but one suspects he might have been invited to a Superkick Party.

Perhaps not realizing that it’s better to show up mid-match to cause a distraction, Jade Cargill makes her presence known right at the bell, leaving Cody wide open for abuse but not nearly weak enough to be pinned. And you know, Avalon is on an AEW Dark winning streak. In a match that goes on longer than you would assume, Rhodes eventually prevails with the Figure Four.

Tully Blanchard is glad FTR is the No. 1 ranked tag team in AEW, but says they need the belts. Jurassic Express drops by so that Jungle Boy can explain that he can beat either member of FTR one-on-one, and Dax Harwood accepts his challenge. Luchasaurus adds that he and Marko Stunt will be ringside to ensure that it’s mano e mano.

I’d call Comoroto Local Talent, except that he’s from Philly and thus not local at all to Daily’s Place. He certainly has a big head of hair and a full beard. The announcers advance the idea that no one else wanted to face Mox, which is why Comoroto got this opportunity. The only question is pinfall or tap out, and it ends up as the latter.

Mox asks for a microphone so he can deliver his message to Omega. Namely, that he doesn’t care if the champ has people watching his back, because that just means more violence as he climbs back to the top of the mountain.

In the back, tensions are also high as Lance Archer gets in the face of the Mad King, Eddie Kingston. In a recurring theme for tonight, Jake Roberts wants to ensure that their encounter next week will be one on one. Make sense too, as I’m not sure that the Snake at his current age is up to holding off the Butcher and the Blade.

When Omega finally enters the arena, he is distressed to see Callis’ face is messed up. He wants to know who did that to Don, who “accidentally” mentions the Jacksons

One of these things just doesn’t belong, and it’s “Big Money” Matt, who is more interested in berating his clients than flying around the ring. This is one of the more slow burn heel turns in recent memory if that’s the endgame of Hardy’s tough love techniques. “Lotta action” is J.R.’s comment on the hyperactive sequences in this one as it heads past the 10-minute mark. Marq Quen grabs a victory with a shooting star press, but only after Isiah Kassidy uses a chair shot when the ref is otherwise occupied. Guess that answers the question about the heel turn, as does the post-bell beatdown led by Hardy.

With Wardlow by his side, MJF goes into the Inner Circle locker room to try to squash any beef in the group. After saying his piece, MJF offers fistbumps to everyone, but Sammy Guevara refuses, saying “we aren’t there yet.”

Charles! That makes me laugh as the Kentucky Gentleman is in full butler regalia as a result of losing his match with Miro last week. Hirsch is game but is in tough thanks to the numbers disadvantage. It doesn’t make Ford look all that strong to need the help to win, but I guess it’s whatever.

Naturally, Miro wants to humiliate Charles Taylor after the match. Up first, he wants Taylor to look Orange Cassidy (chilling out in the crowd) in the eye and tell him that Miro is his best friend now. Cue the sad walking away music from The Incredible Hulk as Orange puts his hands in his pockets and walks forlornly up the stairs.

In the back, Omega and the Good Brothers are beating the crap out of Penta, just for the heck of it.

Ah, perfect, Sammy Hagar recorded a good luck message for “Sammy Hager.” Longtime AEW watchers will appreciate seeing Jericho and Guevara work each other a ton since they were a tag team for a bit, and it’s been a little bit since we’ve seen Santana and Ortiz in a match of any length as a duo. Also fun is seeing Jericho call for his baseball bat, Floyd, only to eat a big boot from Hager. There are a handful of close calls and last-second kickouts, but with time dwindling and Guevara on fire, MJF is able to roll Sammy up and grab the tights to claim victory.

That ending went pretty much the way you figured it might, but we don’t have time to mull it over before the broadcast ends as that last match went long. See you in seven!

A couple of standout storyline moments spiced up an otherwise pretty average show. I’ll continue to feel that Dynamite’s themed episodes, like the upcoming Beach Break, are a double-edged sword, because they generally deliver but end up making the other episodes feel somewhat lesser. We’ll see if next week can break that trend a bit.