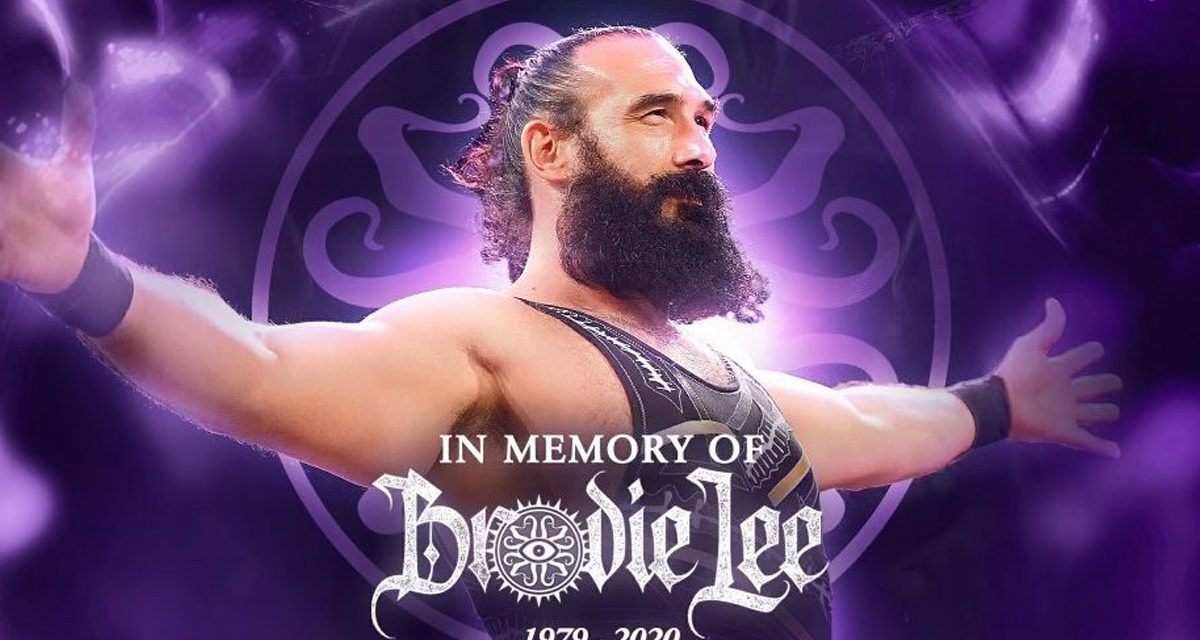 I generally look forward to watching AEW Dynamite and writing up a recap as an escape from what is going on in the “real world.” This isn’t one of those nights, as tonight’s episode is a celebration of the life of Brodie Lee (real name: Jon Huber), who passed away far, far too young just a few days ago. The whole card consists of various kinds of tag team matches, capped by a bout teaming three of Brodie Lee Jr.’s favorite wrestlers to take on Team Taz. It’s going to be sad and happy in waves, almost certainly, but hopefully it will help everyone with the grieving and healing process.

“It’s Wednesday, and you know what that means.” Jim Ross’ opening words are the most appropriate possible, and Brodie Lee’s family members are front and center among the assembled roster as the bell tolls 10 times in his honor. Chris Jericho is on commentary with the usual crew, noting that this is going to be a tough night but believes it will be cathartic. “If you want to cry, it’s OK, dammit,” notes the Demo God.

Jon Moxley is the first person to speak on video, saying it has never been this hard to come up with words in front of a camera. He speaks about how Brodie loved being a dad and husband more than anything, and that he hopes Brodie’s legacy will inspire everyone in the wrestling community to be better people and to appreciate every day. These are going to be great but tough to watch,

An interesting note that Jericho brings up during the match: Brodie Lee was originally scheduled to make his AEW debut in his hometown of Rochester, New York, back on March 18. Unfortunately, that was the week after the coronavirus outbreak made lockdowns and restrictions necessary, so he never got that opportunity. The Bucks and Cabana are a fun combo, and I suspect the other normally unusual teams we see tonight will prove likewise. From the “show must go on” file, there are more hints that Private Party isn’t super fond about Hardy trying to get them to take shortcuts, but the match ends with Cabana helping the Bucks get the pin.

Wait, The Acclaimed is really going to do the heel thing and diss the Dark Order tonight? Guess we’ll never know, as SCU pops out to chuck those guys into the ring for Cabana to take out with a double elbow strike.

It’s strange to see Darby Allin without his face painted, and even rarer to hear him speak from the heart as he does tonight. Allin recalls how Brodie had no ego and would do whatever needed to help mentor and lift up the younger talent. Regretfully, he closes by saying Lee was the No. 1 guy he wishes he had a chance to wrestle.

Lance Archer, Stu Grayson and Evil Uno (w/ Jake “The Snake” Roberts) vs. Eddie Kingston, The Butcher and The Blade (w/ The Bunny)

Though Kingston dedicates this match to Brodie, he also announces the Dark Order is nothing without him, and his squad will prove it tonight. Archer is wearing a white tank top and jeans a la Lee’s WWE Luke Harper persona. Jericho mentions that all of the great things people are saying about Brodie tonight are legit, and that like Eddie Guerrero and Owen Hart, was the rare wrestler about whom no one has a bad thing to say. Grayson gets more time to shine than usual in this one, and Uno gets the pin for his side. The winners take turns beating on Kingston after the bell, with Roberts even contributing a short-arm clothesline.

I’ve so far managed not to tear up during these tributes, but this series of images of Lee with his family as people talk about his

Reynolds and Silver are sporting Lee-inspired ring gear, while MJF has some Puerto Rico-inspired trunks. The Dark Order duo produces papers to throw at their opponents before the match begins in another tribute. MJF gets in the face of Lee’s son, -1, so his heel spirit remains intact. This is a classic tag team encounter complete with a sequence where everyone just hits a signature move in succession, and the crowd is really behind Silver. And holy crap, Erick Rowan, or as Jericho corrects himself, Big Red, comes down to intervene and neutralize Wardlow. MJF unmasks -1, who gets his revenge with a kendo stick shot. The wrestlers at ringside encourage him in a really cool scene! Silver fittingly gets the three count, and he is overcome with emotion as Big Red holds up a sign saying he’ll see his brother down the road.

Kingston simply says he’ll miss Brodie before going on to list a lot of the specific things he’ll miss. His message to Lee’s kids is that as long as they remember him, Brodie is never gone.

J.R. notes that every Dark Order team has won tonight, so there’s some pressure on Anna Jay to keep it rolling. She’s one of the more emotional performers we’ve seen on this card while the match is still going, a reminder of how difficult this must be for all involved. Jay eventually gets Ford locked in the Queenslayer, and her teammate runs enough interference to keep anyone from breaking up the hold.

Dr. Baker calls Tony Schiavone to the ring to complain about how the whole match was rigged. Thunder Rosa isn’t having it, rushing from the back to clobber Baker until Rebel and a legion of referees can calm things down.

Naturally, we hear from Jericho, who reminisces about working with Brodie Lee in Saudi Arabia and how smart he was, putting over his knowledge on all kinds of subjects. He also says he was glad to see Brodie ascend to become the main event talent Jericho believed he could be, and promises that the AEW family will take care of Lee’s family.

Between Cassidy, 10, Ricky Starks and Powerhouse Hobbs, the announcers talk up the young talent that AEW is assembling. I guess Orange isn’t all that young, but let’s not split hairs here. Jericho says Starks reminds him a little of a young Dwayne Johnson in terms of charisma and athleticism, which is high praise indeed. As the crowd chants for 10, both Taz and Anderson grab steel chairs and face off on the stage. 10 nails Starks with a spinebuster that keeps him down, making it a clean sweep for Dark Order teams on the evening.

True to form, Team Taz wants to keep fighting after the bell. But the lights go out, then come back up to show Allin coming from the back door that Mox usually uses. The lights go back out, the snow starts falling, and Sting is on his way down as well. 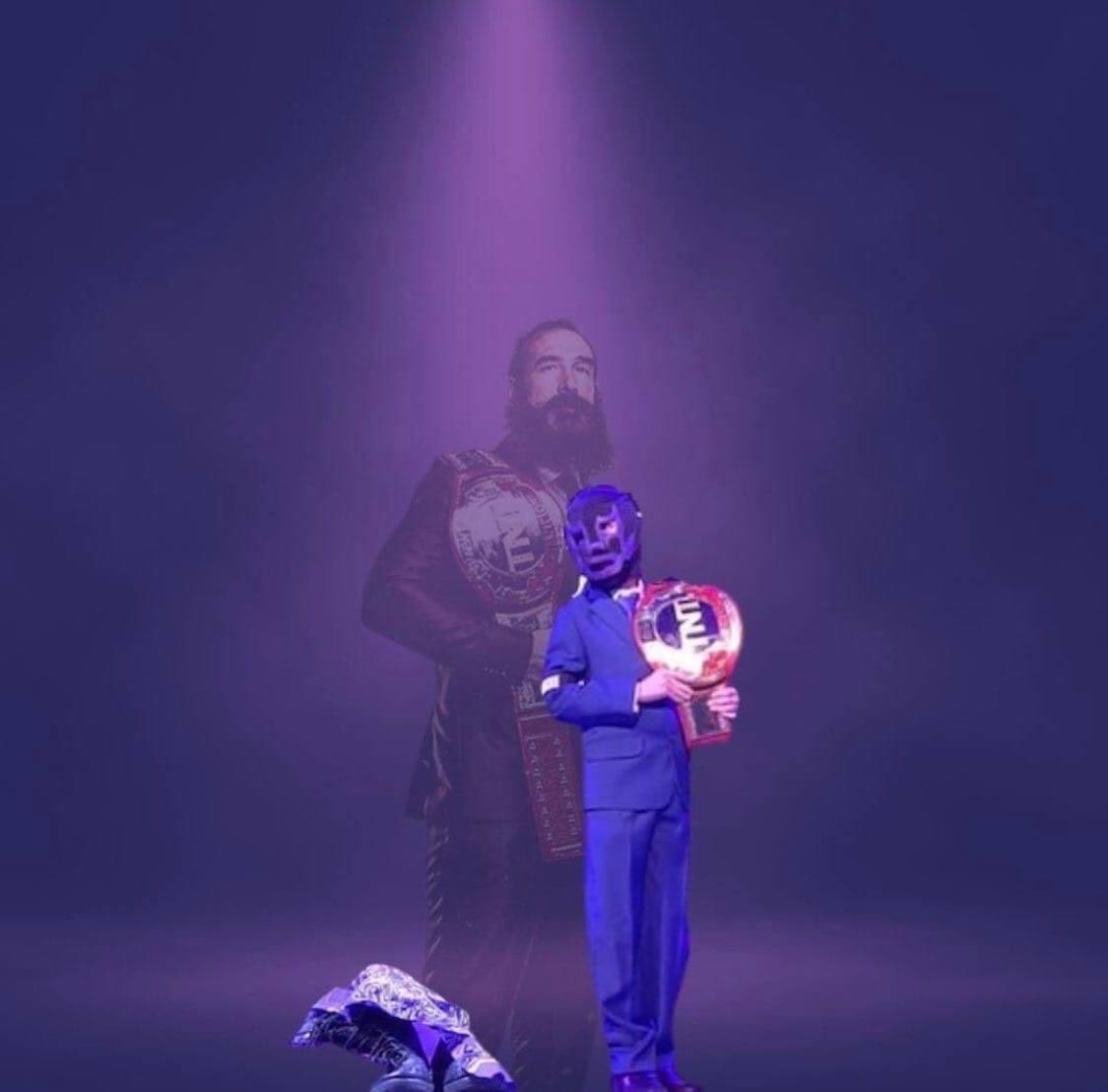 Cody looks like he is almost in tears as he stands in the ring and “Brodie” chants rain down from the fans. “He was a beautiful man, and he leaves behind a beautiful legacy,” Cody says before calling down -1, who walks down the ramp hand in hand with his mom. Brodie Jr. puts his father’s boots in the center of the ring, and Tony Khan presents him with the TNT Championship belt. We end with a tribute video that includes numerous pictures of Lee with his family and friends. There are quite a few images from his time in WWE, a great gesture since this is bigger than company politics. And that’s a wrap on a night that really did celebrate Jon Huber in the best possible fashion. Rest in peace, Jon Huber.

Obviously, this was no normal show, and fittingly so. Thank you to everyone who performed or helped out behind the scenes, and again, my hope would be that it gave some comfort to anyone who knew Jon Huber.