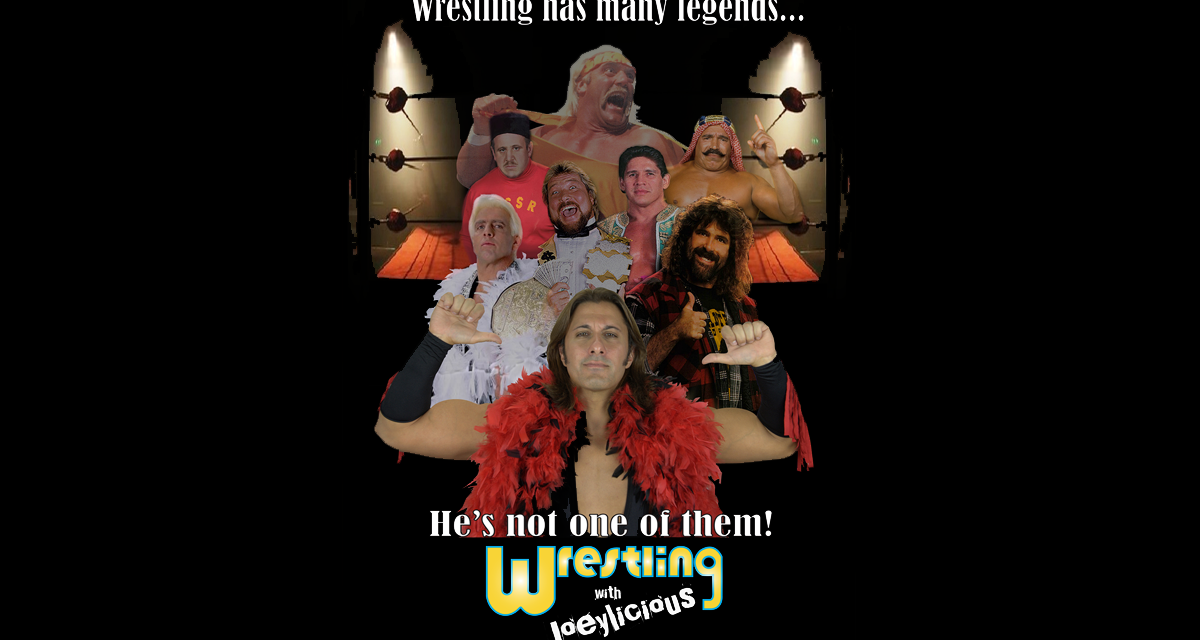 Pro wrestling fans will recall that the entrance theme for World Wrestling Entertainment (WWE) wrestler and nemesis to SlamWrestling writer Bob Kapur, Randy Orton opens with the lyrics: “I hear voices in my head. They council me. They understand. They talk to me.”

But what if you actually did hear voices in your head and they were the voices of pro wrestling legends? And they tried to in fact council you, understand you and most importantly mentor your lackluster pro wrestling career. Such is the premise for the new novel, Wrestling with Joeylicious, by Joey Cassata and Christopher Lynn, out now and self-published.

The authors of Wrestling with Joeylicious: Joey Cassata (top) and Christopher Lynn.

It’s difficult to nail down one job title for Cassata. Along with writer (Joeylicious is his second book with his first being his autobiography, Start With a Dream: A Drummer’s Journey from Rock & Roll to T.V. to Broadway released in 2019), his resume includes being a career musician (he was a member of the band Z02), actor (on the IFC comedy series Z Rock based on his days in Z02 and he has appeared on Broadway), producer and, of course, lifelong pro wrestling fan.

“I’m a very big pro wrestling fan,” admitted the 45-year-old Cassata, who resides in Brooklyn, New York, in a phone interview with SlamWrestling.net. “So, I grew up in the ’80s and pop culture in the ’80s was everything. And growing up in New York, I got the chance to go to Madison Square Garden very often. And one of the things that I went to see at Madison Square Garden was WWF (World Wrestling Federation, now WWE) wrestling at the time. I got to see Hulk Hogan win the title for the very first time, beating the Iron Sheik in January 1984.”

He continued, “I remember I was 10 years old and being so excited to be there and seeing these guys live and then finally being able to see them on Saturday morning on Channel 9 in New York. Hearing them do promos and these bigger than life characters, I was drawn into them. I didn’t have a father growing up. My parents got divorced, really young, so I think weirdly ’80s wrestlers became my male role models and I think I still kind of have that personality today growing up in that ’80s wrestling world.”

It was also during his youth when Cassata created the character/wrestling persona of Joeylicious. In the book, Joeylicious is an indy wrestler longing to make a living as a pro wrestler, which has been his dream since childhood. He is one of the handful of “stars” on the roster for the indy wrestling promotion Brooklyn’s Really Awesome Wrestling League (B.R.A.W.L.). He still lives at home with his mom, who would love for her son to get a “real” job, in his childhood bedroom filled with pro wrestling memorabilia. Joeylicious likes to brag that he makes $50/hour, while his mother is there to remind him that he only works one hour a week! His manager is his best friend from childhood, Scally, whose priorities are alcoholism and hitting on Asian women. The book is an easy read and definitely a unique and creative contribution to the world of pro wrestling books.

If this writer would be allowed one critique, I would ask for less potty/immature humor and even more pro wrestling cameos, especially from some female pro wrestlers.

“I almost like to call this an alternate reality version of what my life could have been,” explained Cassata. “Meaning, I always wanted to become a professional wrestler, but I never pursued it. I wound up becoming a full-time musician. This book is what if I did pursue the life in wrestling. So, all the interactions between me and my mom and Scally are all based on real events, even the stuff with my priests and growing up in a Catholic school, are all based on real occurrences throughout my life. The fictitious part is the wrestling league and of course the wrestlers in my imagination.”

Yes of course, we can’t forget about the voices! Joeylicious is frequently visited by the legends of pro wrestling including Hulk Hogan, Ric Flair, Mick Foley, Stone Cold Steve Austin, Jimmy Hart, Chris Jericho and Rowdy Roddy Piper. The only caveat: Joeylicious is the only one who can hear and see them which leads to much hilarity. True to form, Flair ends up causing Joeylicious the most trouble as the two end up not only fighting with Bingo-playing senior citizens refusing to leave the venue prior to a B.R.A.W.L. show and destroying designer suits in a clothing store when Flair encourages Joeylicious to upgrade his wardrobe. But since Flair and the other legends are only seen by Joeylicious, poor Joey is always left with the consequences, injuries and the embarrassment of having his friends and family constantly questioning his sanity.

The character of Joeylicious was not intended to be immortalized in book form. In fact, Joeylicious made his in-ring debut as part of Cassata’s previous show, Z Rock. In a memorable episode, Cassata and the members of Z02 have a gig at a wrestling-themed children’s birthday party. The band members are dressed as their own wrestling personae for the episode instead of well-known wrestlers, with Cassata as Joeylicious. And Joeylicious cannot contain his excitement when guest star Jericho shows up at the party as a surprise. He completely marks out at Jericho’s arrival! Unfortunately, Jericho and Joeylicious don’t gel and end up in a confrontation leaving Jericho with a broken ankle and Joeylicious as a party-ruiner!

After Z Rock went off the air, Cassata decided to develop the Joeylicious character into its own show. He filmed short, teaser episodes with Piper, Foley, Tito Santana, Jimmy Snuka, the Iron Sheik and Nikolai Volkoff. So, it has to be asked: how did he get all these pro wrestling legends to agree to be on the show?

“It’s really the same answer as I give to anything,” offered Cassata with a laugh. “It’s really just determination and hard work. And that’s really in everything that I do. You don’t get anything without really trying and really dedicating a lot of hard work to it. And the same thing went into working with these legends.”

He added, “The first thing I wanted to do was get some wrestling legends involved because I know these wrestling stars from the ’80s and early ’90s are absolute superstars in front of the camera. And I wanted some place that they can still showcase their talents. I knew that there was no way that they were going to be able to wrestle anymore or be on WWE TV anymore. But I knew that they were still very smart, very sharp and very comedic when it was called for. So, I started reaching out to some legends. And I really just started cold calling and cold emailing people out of the blue. I went online, looked for agents, looked for managers, looked for personal contact info. And I just started email blasting all of these legends with the idea of the show and a little clip of my old show Z Rock with me interacting with Chris Jericho.”

The Wrestling with Joeylicious shorts are all available on Amazon Prime in the U.S. and Cassata’s YouTube channel. The creation of the shorts left Cassata with plenty of memories, especially working with the pro wrestlers who are no longer with us. These episodes are especially bittersweet, nostalgic and truly showcase the talents of these legends of the squared circle. But it is Cassata’s experience filming with The Iron Sheik that was beyond momentous and required plenty of patience and not taking a curmudgeon “no” for an answer.

Cassata decided to fully accommodate The Iron Sheik’s schedule for the episode by filming in the bathroom of a comedy club that the former wrestler was performing at. The Sheik’s manager had informed Cassata that his infamous client was “very temperamental and there’s a chance that the day of the shoot, he might not want to do it anymore.” Lo and behold, the day of the shoot, Sheik’s manager told Cassata he didn’t want to remind Sheik about the filming as he was in a terrible mood. With all the planning, preparation and a crew waiting, Cassata was determined to get the episode in the can, literally.

“So, I said, ‘Listen, let me come over, I want to talk to him for five minutes,’” remembered Cassata. “So, his management basically said, ‘OK, but I can’t guarantee anything.’ So, me being kind of pushy, a little bit, I went over to the Sheik who was confined into a wheelchair at this time, he could walk, but he was most mobile in his wheelchair. I went over to him, politely introduced myself. I never asked him if he wanted to be in the shoot. I never mentioned anything like that. I literally just took him by the back of the wheelchair and rolled him onto my set! And I was literally running through Caroline’s Comedy Club while the Sheik’s manager was yelling at me!”

And as a bonus, the late Volkoff was in attendance and demanded to be a part of the shoot too! Naturally, Cassata obliged and wrote Volkoff into the script last minute.

For Cassata, the ultimate goal was and still is to create a full-length show for a network or streaming service. He says there were even some “major deals on the table to make this a full-time show,” and wrestlers like Hogan on board to participate, but with the onset of a worldwide pandemic, production shut down and he had to adapt. Realizing that many new movies release a novelization first, Cassata decided to do the same with the show. Cassata teamed up with fellow writer and childhood friend, Chistopher Lynn, to adapt his scripts into a novel.

“I kind of enlisted him (Lynn),” admitted Cassata. “I knew he could capture the dialogue of our youth really well, where I knew all the wrestling ins and outs and I knew the storylines that I wanted to tell. Chris is a dynamic writer when it comes to dialogue. I would write outlines of all my scripts. And then Chris would basically punch everything up times 100. Chris would take all the dialogue that I would be writing and he would make it not only funnier, but quicker and more Brooklyn, like when we grew up. So, the writing process was so great. I would have these concepts in my head and I would write down the basic structure of what I wanted. And then Chris would really put the finishing touches on everything.”

Cassata says that a second Joeylicious novel is already done. The sequel will build on the Jericho-starring cliffhanger in the epilogue of the first book. (Not to give too much away but if you are a fan of the Rocky movies and rooting for the underdog, you’ll figure out the set up for the second book!) And this time around, Cassata promises that the head of Joeylicious will be infiltrated by some female pro wrestling voices. (Hurray!) Cassata revealed he also plans on filming and releasing more shorts as soon as COVID-19 restrictions allow.

“I would love for the wrestling community to get behind these projects and really talk about it and spread the word,” Cassata urged. “We’re trying to make sure that this (show) doesn’t fall by the wayside and COVID doesn’t prevent this from becoming the next big hit on Netflix or the next big hit on Amazon!”