The legendary Rowdy Roddy Piper has died. He was 61. The TMZ.com website is reporting that he died of from a heart attack at home in Hollywood on Thursday night, and discovered on Friday. 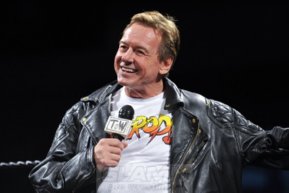 Roddy Piper in Montreal in September 2012 for T.O.W. Photo by Minas Panagiotakis, www.photography514.com

His daughter, Ariel Teal Toombs, confirmed his death on her Twitter account (@arielteal): “My dad @R_Roddy_Piper has passed away. I’ll always keep him close to my heart. There are no words for the depth of sadness and loss I feel.” His son, Colton, also acknowledged the death on Twitter (@ColtToombs): “My father @R_Roddy_Piper was a great man and my best friend I will miss him forever and will always try to be the man he raised me to be.”

He had been diagnosed with Hodgkins Lymphoma in 2006, but last November he said he was cancer free.

Piper was one of the greatest performers of the 1970s and especially the 1980s and 1990s, when he was the natural foil to Hulk Hogan.

Piper was born Roderick Toombs in Saskatoon, Saskatchewan on April 17, 1954. His father worked for the Canadian National Railway as a police officer, and they moved to many different outposts over the years: The Pas for his first year at school, Dofin, Port Arthur, Dawson Creek, Winnipeg, Montreal, Toronto, plus Glasgow, Scotland and Melbourne, Australia.

Young Roddy and his father clashed and he was out on his own at 13 (or is it 12, the numbers never agree). Among the places he lived as a streetkid was Toronto.

In 1972, he drifted into the life of Tony Condello, who was just starting up a wrestling school in Winnipeg. “He was 17 years old, this kid, approached me and said he wanted to be a wrestler. I taught him. I gave him that name and that gimmick that he holds,” Condello said. “He was with me until 1974, ’75 at least. His first match was June 5, 1973.”

Piper always claimed that his first bout was with Larry Hennig, who outweighed him by 150 pounds, and lasted only seconds in the old Winnipeg Arena; it wasn’t the truth, by any means — he’d been working for years, off and on, by then at small Winnipeg venues.

Roddy did play the bagpipes on his way to the ring, a skill he had been practicing since age five, and it made for a natural last name.

During at least part of his two years in Winnipeg, Piper said that he actually lived in Al Tomko’s gym. “He had me paint all the weights. So what I did was take a 45-pound weight and paint 30-pounds, and messed all the weights around. Great entertainment there for myself.”

Some of what was to make Piper a big star was in evidence in Winnipeg, Condello said. “I knew he had a lot of potential. I knew he was pretty good yapping. I figured one of these days, this kid will hit. He had something about him that nobody else in the club had. Of course, I never knew he was going to be such a big star.”

He took his act on the road, to Kansas City, Portland, Texas and eventually to southern California in 1975.

Leo Garibaldi was the man who set Roddy Piper loose upon the world. Up until Garibaldi decided to allow Piper free reign, he was essentially a lower-card wrestler. But the down-in-the-dumps Los Angeles territory was starved for new talent in the mid-’70s — particularly heels — so a drastic measure was taken. “I booked him in a match, and I just gave him to somebody to eat him up. But the guy would not be eaten up,” Garibaldi said. “He was playing the bagpipes, he was jumping around and flashing his skirt. The people went crazy. They didn’t know to hate him or to love him.”

Piper has had too many mentors to credit, including Garibaldi. “When I got into wrestling, I went from having nothing to having 100 fathers,” he said. “These guys taught me the ways of life, brought me up.” As the young rookie on the totem pole, Piper had to do what he was told.

“I owe my whole career to everybody but myself,” he said. “The structure by which I was taught. I need to keep your mouth shut at all times, write nothing down, keep everything in your head, shut your mouth and give it your all at all times.”

One story with Mad Dog Vachon illustrates his point. “I’m wrestling Mad Dog. I’m the floor and he picks up the stairs as you climb into the ring, and he throws them down on my head. It hit me on the jaw, and just went, ‘kwooong!’ I know ‘don’t give up.’ I’ve been taught, just go back in there.”

After a stint in Portland, Piper had a first go at the WWWF in 1979, but was deemed too small at 6-foot-2, 235 pounds to be a star in the big man’s territory. So he hooked up with Georgia Championship Wrestling, which was just beginning to be noticed on Ted Turner’s TBS Superstation. Both there, and subsequently in Charlotte when the promotion merged with Jim Crockett Promotions, Piper was a superstar. He could talk and talk and talk, whether it was as a colour commentator beside Gordon Solie or cutting a promo for a feud. But most importantly, he could back up his words in the ring.

That ability to rile a crowd with words and actions would shoot Piper to superstardom in the WWF in 1984. He was there just as the wave broke sending pro wrestling into mainstream consciousness. In fact, by booting Cyndi Lauper and setting up the first Wrestlemania, Piper wasn’t just there, he kickstarted the Rock ‘n’ Wrestling connection.

“WrestleMania was basically an accident. The War To Settle The Score was the big one,” he explained. At ‘War’, which aired on MTV, “a lot of stuff happened that wasn’t going to happen, like the New York City police jumping into the ring, and also I got to tussle with them … next thing I know, I see something blonde coming out, and I turned and kicked. You can see it, I tried to pull the kick. Field goal! Cyndi Lauper! Oh, and it exploded.”

Piper was on top in the WWF until his ‘retirement’ match against Adorable Adrian Adonis at the third WrestleMania at the Pontiac Silverdome. He would return on many other occasions, including a run with the Intercontinental belt — his only WWF title.

The main reason Piper took time off from wrestling was to start his acting career. He’s best known for his starring role in John Carpenter’s They Live, but he’s done numerous other flicks including Jungleground, No Contest, Marked Man and Hell Comes to Frogtown.

In 1996, Piper was signed by World Championship Wrestling and quickly resumed his epic feud with Hulk Hogan. With their roles now reversed, the babyface Piper was unable to wrest the WCW World belt from the heel Hollywood Hogan, though he came very close on many occasions.

Away from the spotlight of the big promotions, Piper tried his hand at standup comedy, wrote his autobiography, and promoted a little in Oregon, which had been his home for more than 20 years with wife, Kitty, and their four children. Over the past few years, he had tried to help his son, Colt Toombs, succeed in mixed martial arts and then pro wrestling.