Brunzell jumps into self-publishing with MatLands

He doesn’t have any axes to grind or stories of sex and drugs he wants to tell. What made Jumpin’ Jim Brunzell put pen to paper was much simpler — he wanted to show the uniqueness of the professional wrestling industry. 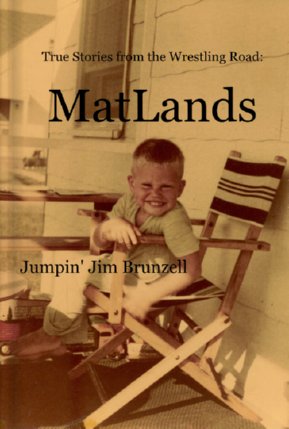 Brunzell said he has been telling stories from his nearly 30-year career over the past two decades and various people have told him he should write a book. Six years ago, he decided to do so by recording stories on a Dictaphone his wife, Mary, bought for him. But it wasn’t until the past couple of years that he became more serious about the project. What started out with five stories grew to more than 40.

“You never know when I’m gonna tip over,” Brunzell said with a laugh. “I think the time’s right (to publish the book). I’m going to be 66. Originally, I was going to do this for my kids, my daughter Jenny and my son Jimmy III and my two grandsons from Jenny and Chris.”

But he said “as the stories became more colorful” and increased in number, he opted to turn it into a book where he could tell “stories about the real uniqueness of the life of professional wrestling.”

He said because there already are a plethora of stories about the negative side of “any work-related job,” he wanted to go another direction.

“I thought, ‘Well, people don’t want to hear that,'” Brunzell said. “I’m not going to talk about this, talk about that, and incriminate myself or others when I think there’s sort of a lighter side to it that I wanted to convey to the wrestling audience.”

And he said he’s happy with the final product, MatLands. “It just sort of tells a little snapshot what it was like being a pro wrestler for 27 years,” Brunzell said.To get his tales from the road out to the public, Brunzell opted to go the self-publishing route, using Blurb. His wife, Mary, also has published a handful of books through the company. Brunzell did talk to a couple publishers prior to settling on Blurb.

The book has been completed since December, according to Brunzell, but logistics slowed down the publishing process. Once MatLands was submitted to Blurb and Brunzell ordered 50 copies, he said he sold the majority of them “almost immediately.” As a result, he only was able to bring eight copies to the George Tragos/Lou Thesz Professional Wrestling Hall of Fame weekend in mid-July.

Brunzell currently is promoting the book through signings at bars and restaurants he has been a patron of for 40 years, and at film festivals his son organizes in St. Paul, Minn., and Austin, Texas, though he might add at least one bookstore.

For more information, or to order the book, visit this link, where a 15-page preview can be viewed.