Mick Foley started the autobiography fad four years ago when he released Have A Nice Day. Since then dozens of wrestling books have been released, and none have compared to the original. They have ranged from the good (Stu Hart) to the God-Awful (Hogan, Goldberg). The Stone Cold Truth falls somewhere in between. 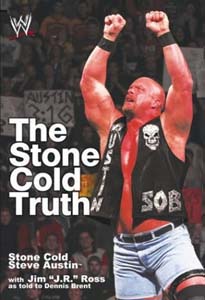 Written with WWE Employees Jim Ross and Dennis Brent, it is a typical “WWE-ized” book: The company is great, Vince McMahon is a brilliant genius, etc etc.

The book starts off with the night before WrestleMania XIX in Seattle. Austin was hospitalized that night from dehydration and exhaustion. He talks about how he knew the next night was going to be his last match and had worries about it.

From there, the first 130 pages cover growing up, going to wrestling school under Chris Adams, touring the territories and his WCW & ECW careers. As is typical of WWE books this is all rushed through and, key elements are lost. There is not nearly enough depth to the story of the Hollywood Blondes team with Brian Pillman, or his classic feuds with Ricky “The Dragon” Steamboat. It is disappointing to see such a vital part of his career basically ignored, but at the same time it is an interesting look into his early career, such as the “tuna & potatoes diet” he was on when touring the south.

The rest of the 312 pages consist of an overview of his WWE career. His early “Ringmaster” days, the birth of “Austin 3:16,” a lengthy chapter about his feud with McMahon, his reason for leaving the WWE in 2002 are all included, while the Invasion angle, his feud with Triple-H and other important things are ignored, before it wraps up where it started, at WrestleMania XIX and his final match against The Rock.

Austin has harsh words for Adams, his trainer, calling him a “con man” who “didn’t try to smarten me up or teach me the real deal when it came to wrestling.” He briefly mentions Adams’ death, in which a friend shot him in self-defense, saying, “I’m sorry he got killed, but the guy did not have good karma.”He also is brutally honest about his feelings towards Owen Hart. A botched tombstone at Summerslam 1997 lead to many of the neck problems Austin still deals with. He exhibits remorse over Hart’s death, but is obviously still unhappy with the piledriver incident. Many may feel that he is harsh during the chapter, but he could have been a lot angrier then he was. It makes for one of the more interesting, and straight-up truthful chapters in the book.

Also earning their own chapters are Chris Benoit, Foley, Pillman, Ross, and Eric Bischoff. Other than that, it is basically a light overview of his wrestling career. Those looking for inside dirt on the issues and eventual divorce from Debra will be disappointed, as there is a gag order on the situation. This could be considered a blessing, as endless pining about his ex-wife “The Kat” really dragged down Jerry Lawler’s book.

It is an enjoyable and quick read, without a lot of depth. It is interesting to note the unique style in the book; there are excerpts spaced throughout the book where Austin’s parents and Ross often contribute their own thoughts.

The book will reveal a few interesting facts about Austin that few will know, has a lot of pictures, and certainly is worth picking up, but it isn’t fantastic or particularly revealing.