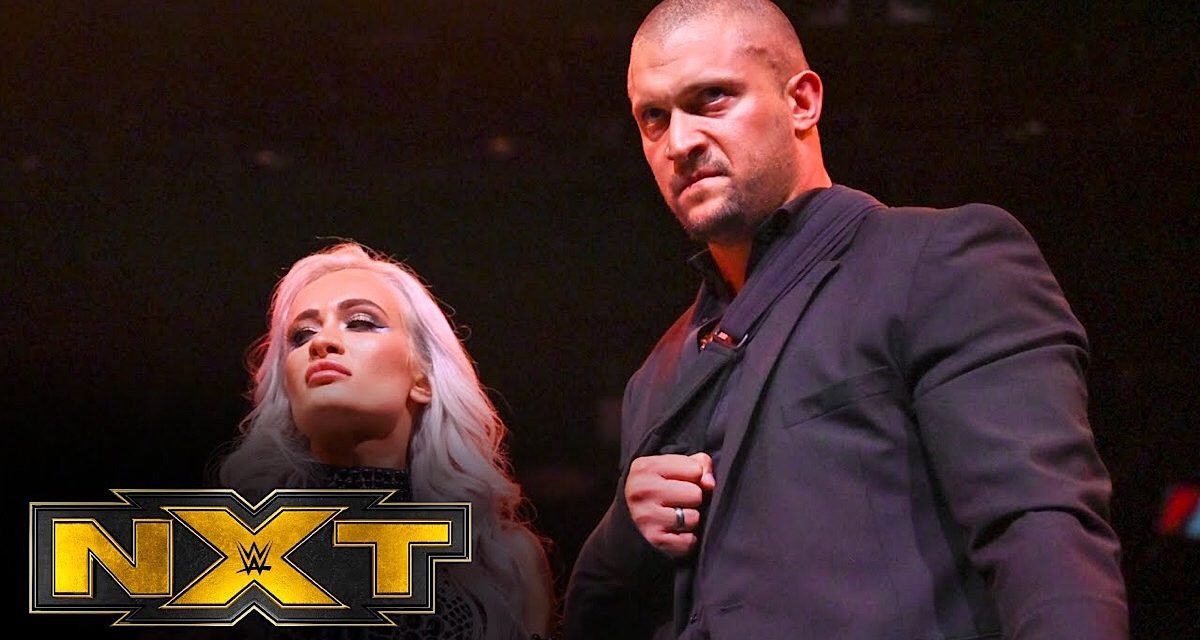 After defeating Keith Lee at NXT Takeover: XXX, the brand-new NXT Champion Karrion Kross opened the show. Accompanied by Scarlett, Kross was suited up and unfortunately wearing a sling; he took the mic and confirmed his separated shoulder. Kross declared, “Doomsday is still coming. Because no matter where the time is told, in the end, everybody pays the toll. And God help the obstacles that will be in my path.” The newly crowned, now stripped former champion left the belt inside the ring with an hourglass looming behind it. ‘The end is here’ for Kross’s very first NXT title reign.

Later, General Manager William Regal wished Karrion Kross a healthy recovery. He announced, “Next week, on a very special Tuesday night episode of NXT, four of the greatest superstars in NXT history — all former NXT Champions… will compete in a four-way match to decide the new NXT Champion.” The competitors are Johnny Gargano, Tommaso Ciampa, Finn Balor, and Adam Cole. A stellar four-way match indeed! But Regal wasn’t finished: “For the first time in history, the NXT Championship will be decided in a four-way, 60-minute Iron Man match.”

Takeover featured some momentous outcomes, and the yellow brand’s landscape continues to change. In other news, former Intercontinental Champion Wade Barrett made his WWE return after a 4-year hiatus. He joined Vic Joseph and Beth Phoenix on commentary for tonight’s episode of NXT.

Breezango attacks the champions before the bell even rings. But Imperium takes control of Fandango before picture-in-picture. Back from break, Tyler Breeze makes the comeback. He helps Fandango hit an assisted top-rope leg drop on Aichner, but partner Barthel rolls him out the ring. Fandango flies over the top onto Barthel before Aicher delivers an outside German heading into commercial.

Barthel takes out Breeze by throwing him into the plexiglass, and Fandango is left hanging. Guest commentator Wade Barrett shows his understandable bias, citing Fandango as a long-time compadre. The lone-man avoids a double-team maneuver and tags in Breeze who then escapes Imperium’s finisher. He takes out the champions with two Superkicks before tagging in Fandango. The latter hits a top-rope, double leg drop on both opponents and scores the victory on Aichner! What a surprise and what a pop! Both Breeze and Fandango have now earned their first ever WWE championships. Not a good look for Imperium, but this was absolutely needed to progress NXT’s stalling tag division. 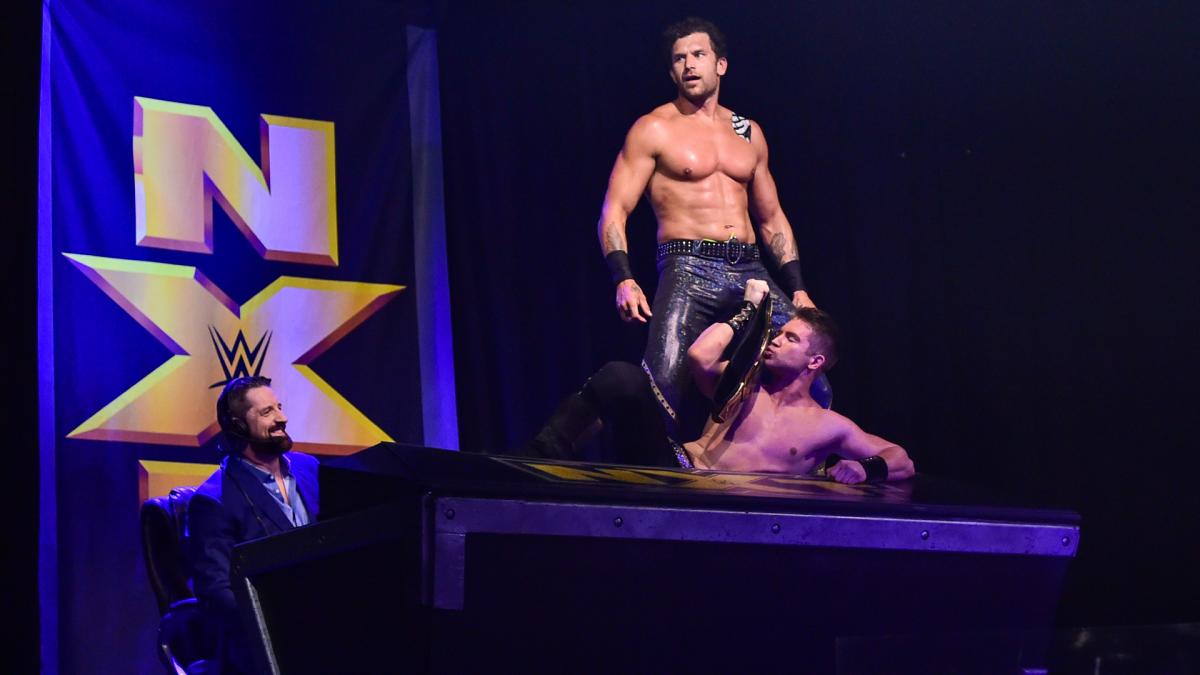 Ciampa is making his first NXT appearance since being defeated at NXT Takeover: In Your House. He stomps away at Atlas and quickly hits The Willow’s Bell DDT. And with that, the victory goes to Ciampa. The returning madman continues his attack on Atlas as referees and officials attempt to separate them. Ciampa slingshots Atlas into the ring’s infrastructure which puts the latter onto a stretcher. Referee Drake Younger screams, “What did he do to you, he’s got nothing to do with you!” But Ciampa isn’t finished, DDTing Atlas off the stretcher and onto the floor. 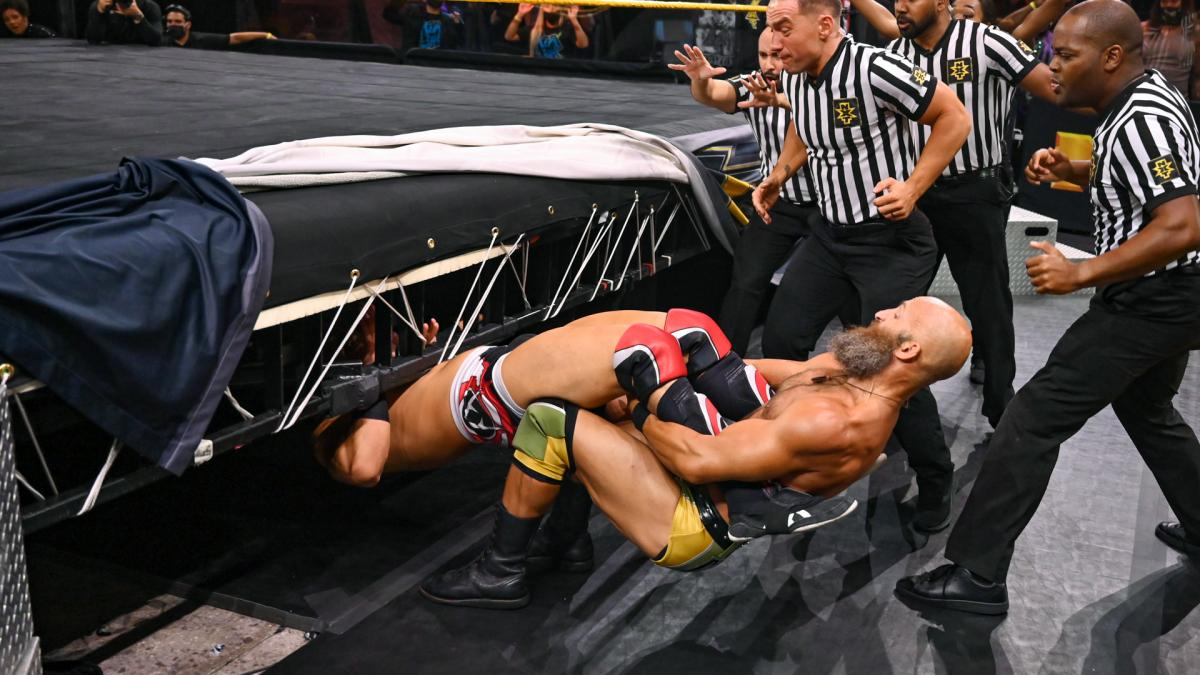 Bronson Reed is interviewed backstage before a returning Austin Theory interrupts. Theory mentions his WWE superstardom, how he wrestled on Wrestlemania at 22 years old. Reed takes offense and slaps Theory. Has Theory been relegated back to NXT and kicked from The Disciples?

Mia Yim makes her entrance before The Robert Stone Brand appears. Stone cuts a promo, but once again, Shotzi Blackheart runs him over with her toy tank. The two women bump fists before locking up. Stone is comically carried off by a couple referees. The competitors are level, but Yim takes advantage by hitting her opponent in the throat. Blackheart then makes a comeback and so does Yim. It’s move after move until Blackheart hits the top-rope senton for the victory. Commentary is all too hype for this babyface filler match.

General Manager William Regal appears inside the ring. He makes his aforementioned, major announcement. The announcement is so major that Wade Barrett confirms his return to commentary next week. 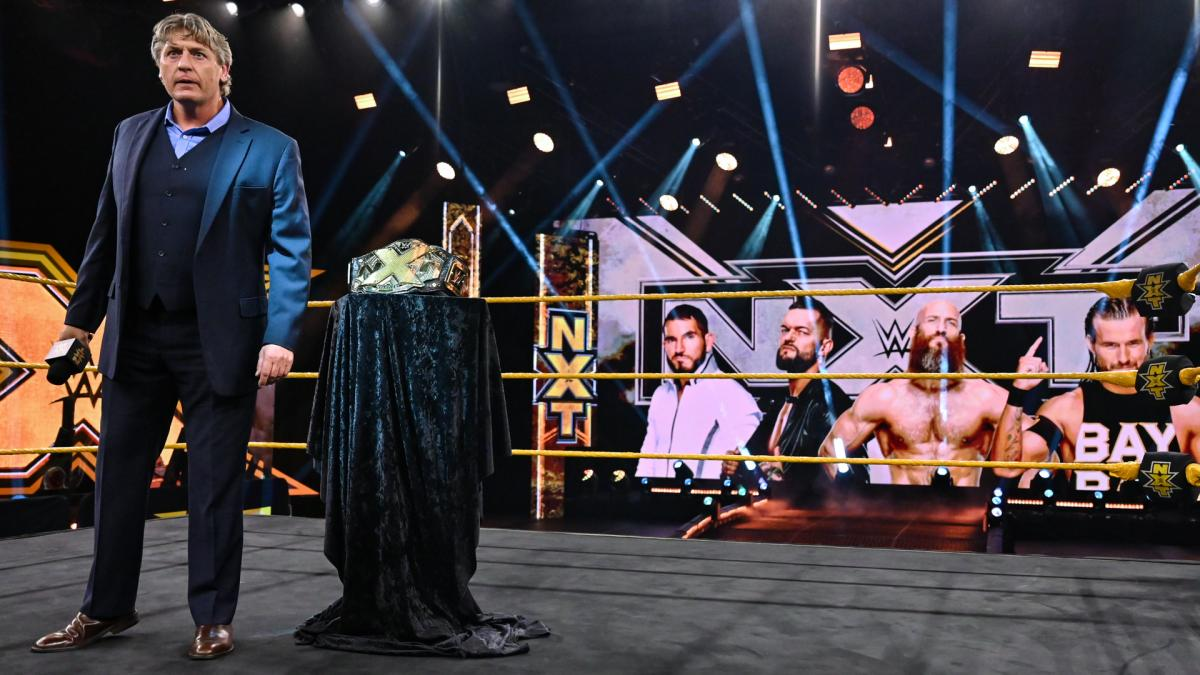 The fate of the NXT Championship is decided. Courtesy: WWE.

Escobar sends back his Legado Del Fantasma brethren — ‘It’s a secret tool we’ll use later.’ The match begins, and Scott out-luchas the luchador before commercial. The champion keeps pressure on Scott, but the latter makes a comeback. Scott continues to display his technical prowess in this match. He heads outside, but Escobar throws him into the plexiglass. The two scale the ropes, and Escobar baits the challenger into attempting a hurricane to which the former counters with a powerbomb.

Back from break, Scott lets loose and pummels the champion. He follows with the Fosbury Flop before Legado Del Fantsama returns and creates a distraction. But Breezango evens the odds and the match continues. Scott delivers a modified JML Driver, but the champion grabs the bottom rope. Escobar rolls outside and puts on a lucha mask, headbutting Scott with it. He keeps the title after this screwy but innovative finish. Commentary never describes what actually happened, which is presumably, the masked was stuffed and gimmicked. That would’ve helped sell the outcome.

Johnny Gargano cuts an uninspiring promo that builds his NXT Championship match. He’s been lost and directionless on NXT for too long.

Finn Balor also stakes his claim at the NXT Championship. Balor reclaiming the gold would be great.

The Undisputed ERA enter without their leader Adam Cole. But this finally puts some spotlight on the uber-talented O’Reilly. Maverick aggressively charges at his opponent. He sends him ringside, climbs the ropes, and hits a swanton onto Roderick Strong and Bobby Fish ringside. O’Reilly takes control as guest commentator Wade Barrett says, “(The Undisputed ERA) are way more cohesive than (Nexus) ever were.” Maverick makes a fiery comeback but is quickly stopped by his opponent. O’Reilly showcases his brutal strikes and then cinches an Achilles Lock for the victory. The ERA is about to attack Maverick before Killian Dain makes the save. Maverick says “Thank you”, but Dain clobbers him. Maverick can’t catch a break. 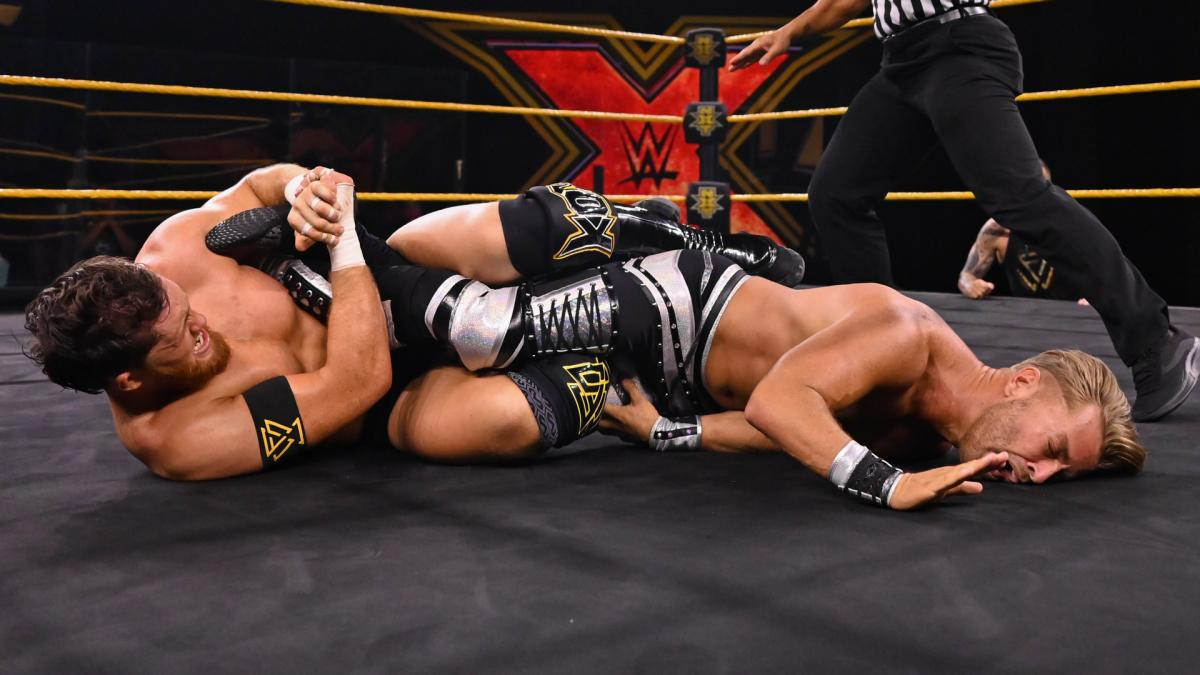 Rhea Ripley is interviewed backstage and claims she wants the NXT Women’s Championship. She explains that her run-in at Takeover was a message to Dakota Kai and Raquel Gonzalez.

Ripley powers over Kai, forcing her to tag in Gonzalez. Shirai is tagged in and outsmarts Kai before break. Ripley makes a comeback on Kai, but the heel team works together to turn the tide. But Shirai is eventually tagged in, and she single-handedly takes out her opponents. She hits the Tiger Feint Kick and springboard dropkick on Kai for a two-count. Gonzalez barely breaks up another pin attempt after a German, and the former powerslams the champion. As the referee is distracted, Mercedes Martizez takes out Ripley ringside. She recovers, but Gonzalez delivers a powerbomb for the victory. To put it bluntly, this was a weak main event. 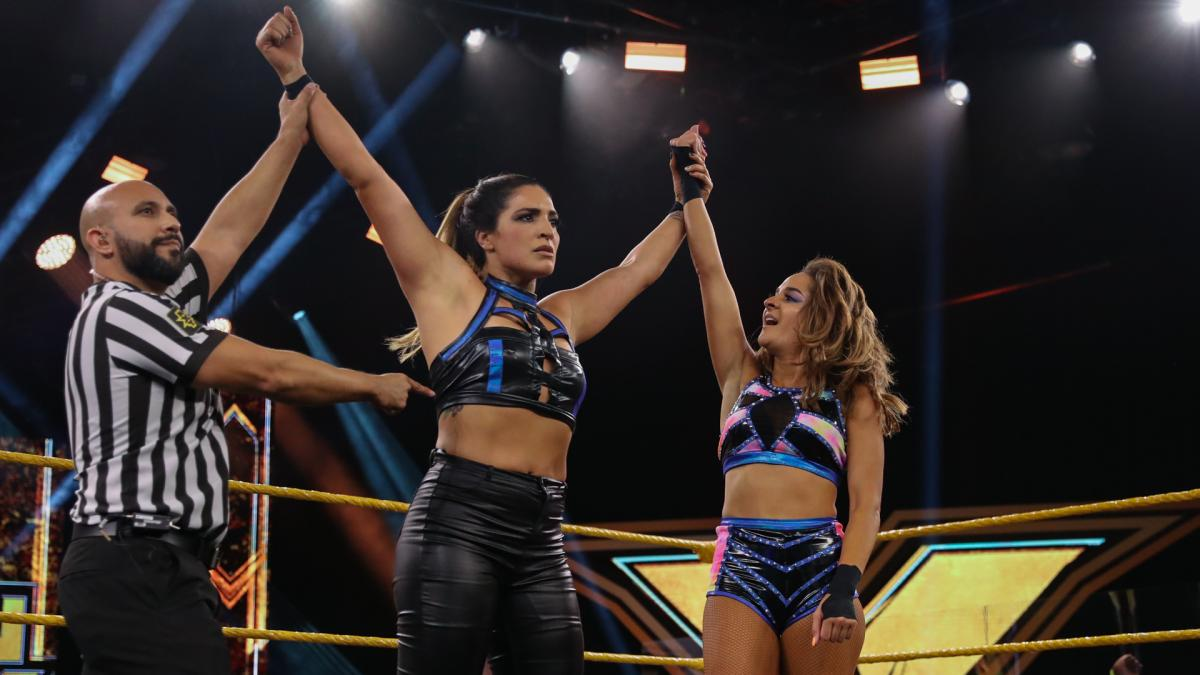 This episode peaked within the first 30 minutes. It then gradually descended into a bland and boring WWE show. Without Breezango’s awesome championship win, tonight would’ve went nowhere. Also, Wade Barrett did pretty good on commentary.