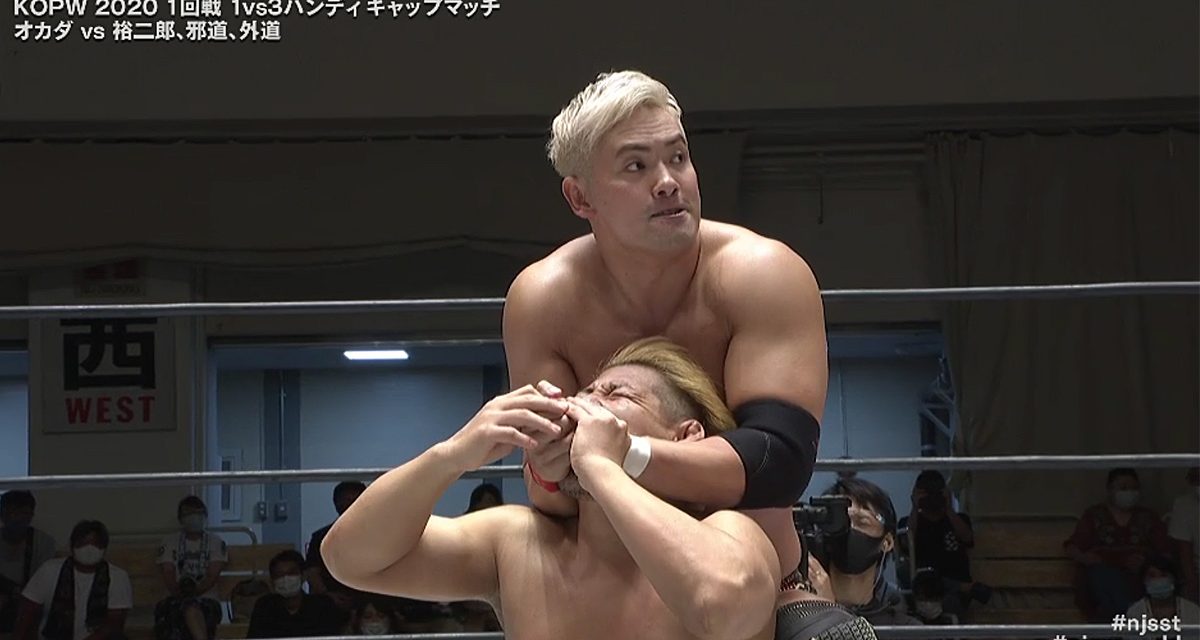 The first round of NJPW’s King of Pro Wrestling 2020 tournament kicked off with a night of uniquely booked and uniquely staged matches. It all made for a very unpredictable and entertaining event although the test of the remote cheering system didn’t add anything at all to the broadcast. Here’s hoping NJPW just drops it. The natural crowd noise is enough.

For those who missed it, the KOPW 2020 tournament runs across two nights: August 26 and August 29. Only eight wrestlers will participate. Each combatant will offer their chosen stipulation for the match ahead of time. The public will then vote on which stipulation they would like to see. The title will be defended by the champion to the end of year with the winner of the final title defence being awarded with the title of 2020 KOPW Champion and a trophy.

Round one saw Desperado, Toru Yano, Kazuchika Okada and Sanada move on.

Kazuchika Okada had the toughest mountain to climb in a 3-on-1 handicap match against Bullet Club members Jado, Gedo and Yujiro Takahashi.

When Gedo’s super fly splash from the top rope didn’t pin Okada, Yujiro argued with Red Shoes. Gedo slipped on his brass knuckles. Okada elbowed him in the face sending them flying out of the ring. Jado brought his kendo stick into play. Okada shotgun drop kicked him into Koishikawa Korakuen Gardens. Gedo threw Okada off the ropes. Okada jumped over them splashing both Jedo and Yujiro on the floor. Okada gave Gedo a Tombstone Piledriver and a Cobra Clutch to win the match. 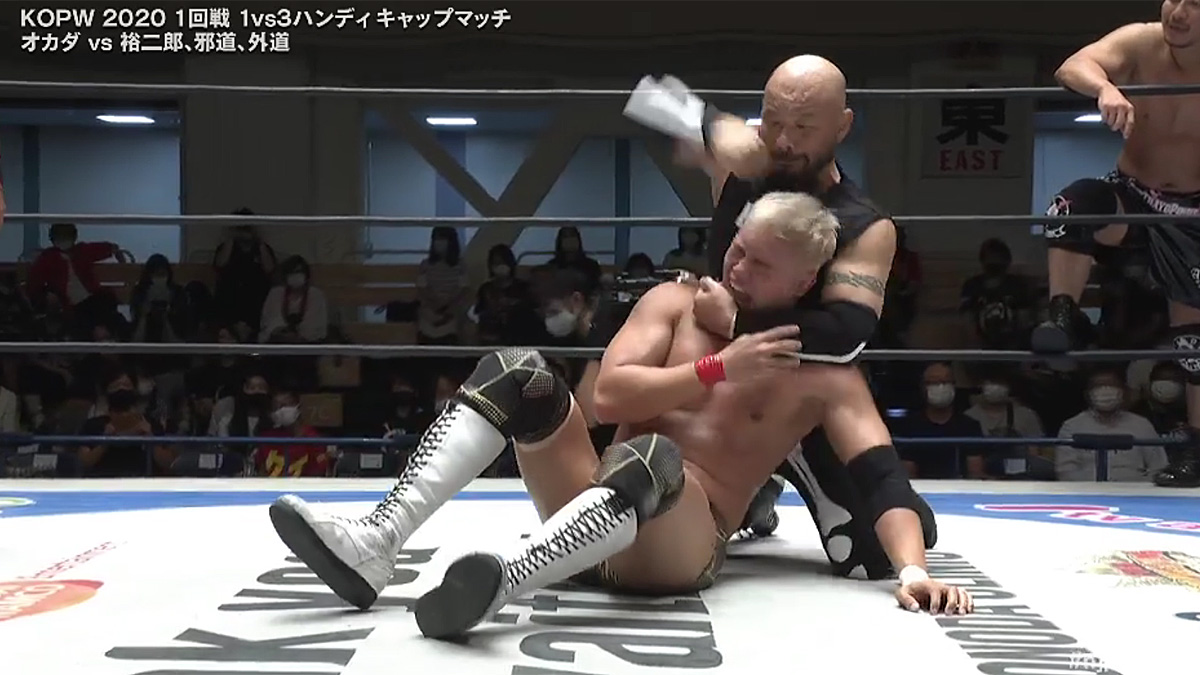 Perhaps Okada should have worn a helmet. Courtesy: NJPW.

Desperado and Satoshi Kojima couldn’t use their finishers in their tournament match. The crowd was solidly behind Kojima the entire match. Desperado spent the match targeting Kojima’s knee. Kojima came close to being disqualified for almost using his lariat. Kojima DDTed Desperado on the ring apron instead.

Desperado dumps the official as Kojima locks in a submission hold. Desperado taps out but there is no official to witness it. Desperado clotheslines Kojima repeatedly. He won’t go down. Kojima hits his Lariat and is disqualified. Knocked out flat on his back Desperado is in no condition to celebrate.

Next up was Toru Yano versus Bushi in a match where the traditional three count became a two count instead so there are lots of sneaky pin attempts. Yano almost scores a pin in by spraying sanitizer in Bushi’s face blinding him. Bushi gains possession of the bottle. Yano is not happy about that. Bushi sprays Yano in the face for a roll-up and a one count. 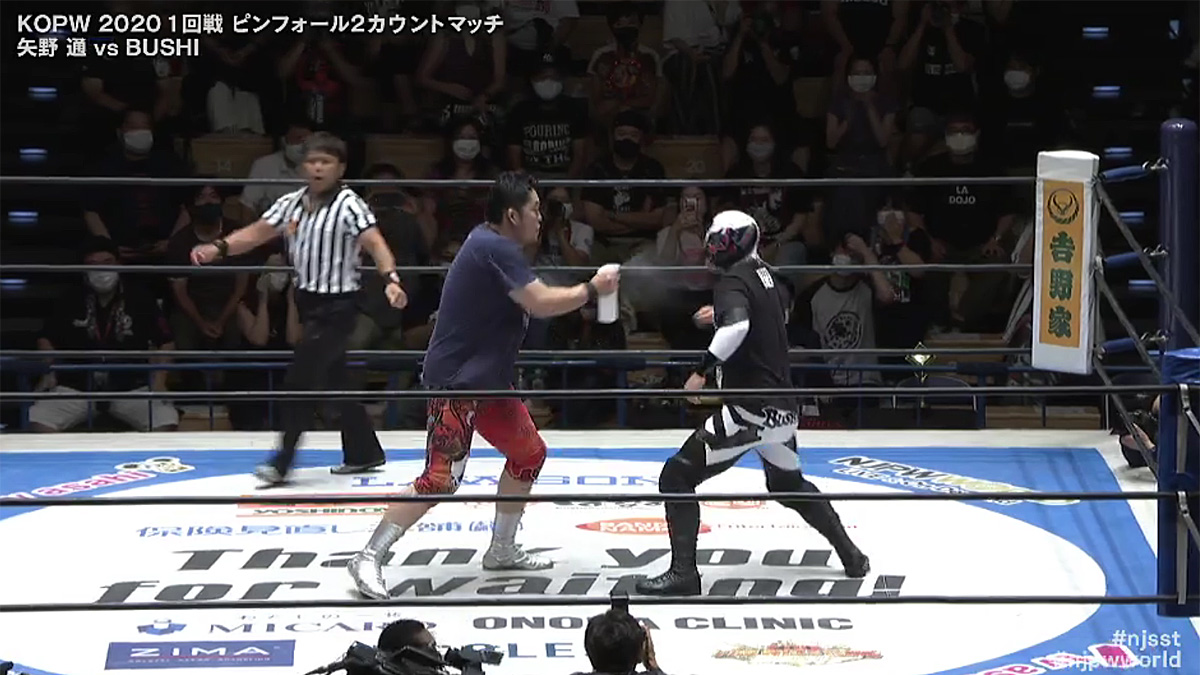 Yano makes sure Bushi is as clean as can be. Courtesy: NJPW.

Bushi steals Yano’s athletic tape and wraps his legs up. Yano reverses a roll-up though pinning Bushi. Yano danced around then hopped to the back with his legs still taped together.

The creative ways the stipulations were used created one of the best NJPW events in some time. The gimmicks weren’t taking over the matches. They were enhancing them with many creative twists and turns.