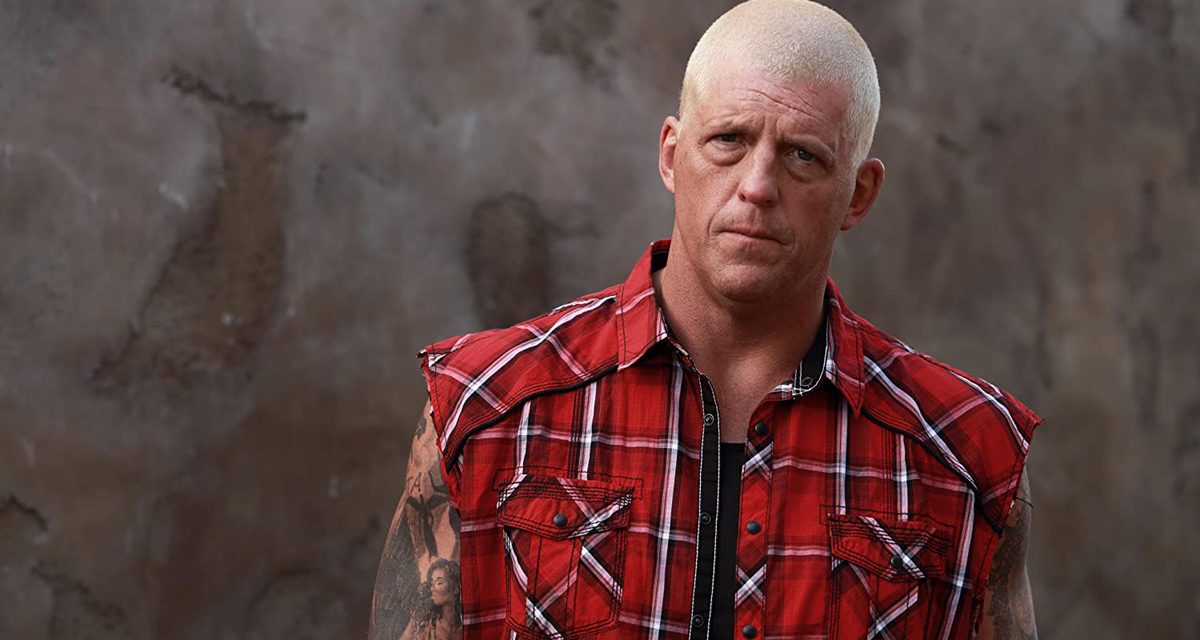 The producers of Scare Package didn’t have to cleave off, hack off, slash off or even twist Dustin Rhodes’ arm to star as the Devil’s Lake Impaler.

He was all in from the very start.

“Aaron (B. Koontz) called me up and asked me to be a part of it as they needed someone to play the creature in the film. I said… Let’s do it!” recalled Dustin Rhodes in an exclusive SlamWrestling.net interview.

Rhodes, a star in AEW, not only stars in the film but serves as one of its producers.

The film joins the Shudder horror streaming service this Thursday though it had its premiere over the weekend as part of The Last Drive-In Show, Shudder’s regular Friday night horror marathon hosted by the living, breathing terror film aficionado Joe Bob Briggs. In the horror comedy anthology, the owner of a video store details a series of chilling tales to illustrate the rules of the horror genre to his newest employee.

Rhodes may be best known for The Natural or Goldust in the squared circle but in the last few years he has been slowly building a Hollywood resume which began in 2014 when he played the role of Preacher Woodward in the horror film Meet Me There. As an old school horror fan, Rhodes continues to be drawn to the genre. 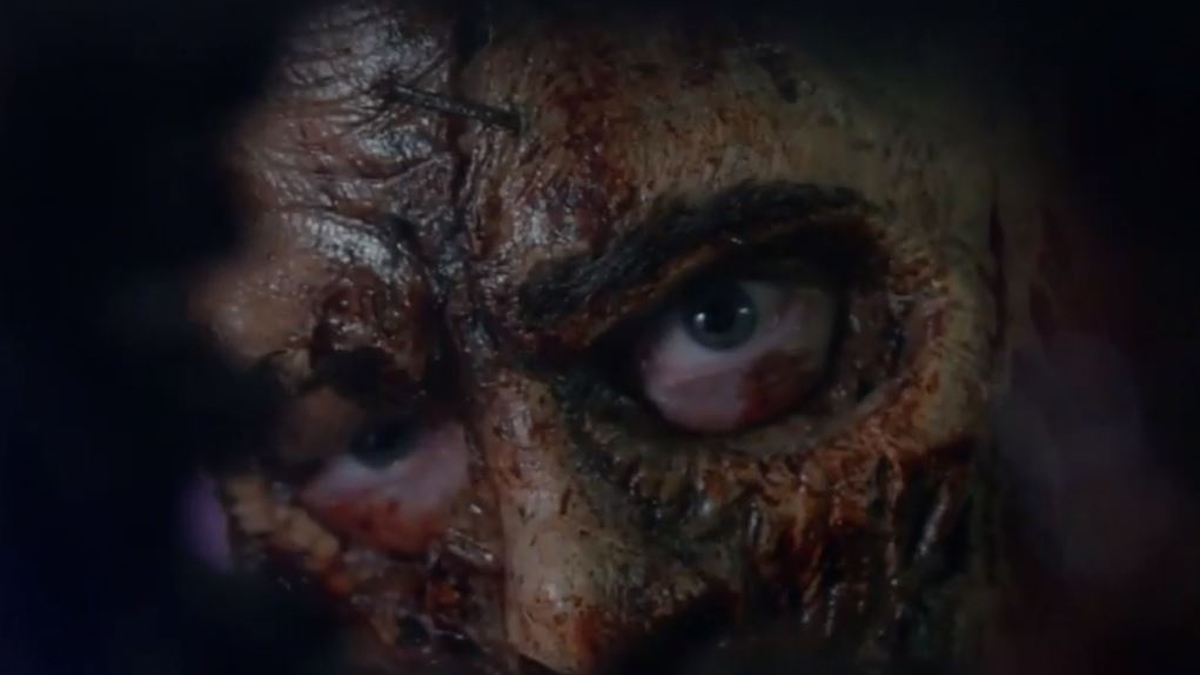 “I have always been a big fan of horror films. I love watching the shock and the awe, the jump scares and even the movies that turn out to be train wrecks. I love them!” he said. “My all-time favourites are The Exorcist, Salem’s Lot, the original Amityville Horror movie and some of the modern day films like the Annabelle series but they don’t make horror movies like they used to.”

Throughout his wrestling career Rhodes has played the part of a heel and a face. Since heels don’t have the ethical shackles babyfaces do Rhodes admits that portraying a villain is far much more fun for him. With the Devil’s Lake Impaler, Rhodes faced a challenge that called upon his years of experience emoting in the ring conveying to fans in the very front row to the nosebleed section what he was feeling during a match in the ring. Except for one word spoken at the end of the film, The Devil’s Lake Impaler has no lines and to further complicate things, he wears a mask.

“It is always much more fun playing a bad guy. I would prefer that but playing a bad guy and not having a speaking part like I did was a challenge. You have to figure out how the creature moves, what his facial expressions are. With a mask on, the audience cannot really see your emotions so you have to do things like little head twitches and open your eyes wide or close them tight. I really tried to focus on those kinds of things to bring out and portray the character as best that I possibly could,” he said of his approach to role.

Rhodes credits his 32 years of on-screen television work for making the transition from the small screen to the big screen easier.

“I have learned over that time to portray a character with feelings and emotions. In my business you have to sometimes step outside yourself and push yourself to the limit, doing things that might make you a little uncomfortable but in the end those are the things that will stand out and make you stand out,” said the squared circle veteran, son of the legendary Dusty Rhodes and brother to AEW superstar and executive vice president, Cody Rhodes.

At times, the Devil’s Lake Impaler role had Rhodes cooling his engines on the set as all told it took 45 minutes for make-up and the mask to be applied to Rhodes’ face each day on the set. For him though, all of the challenges he faced were worth it in the end when fans see the finished product.

“The way I envisioned the Devil’s Lake Impaler after they pitched him to me was this methodical, slow, his brain is not all there. He is thinking but he isn’t thinking quickly enough. I wanted him to be kind of like a Michael Myers from Halloween. You couldn’t see his face and you didn’t see his eyes often either in those films. It was a challenge playing the Devil’s Lake Impaler and now I can actually say I have acted in a creature feature now!” said a proud Rhodes. 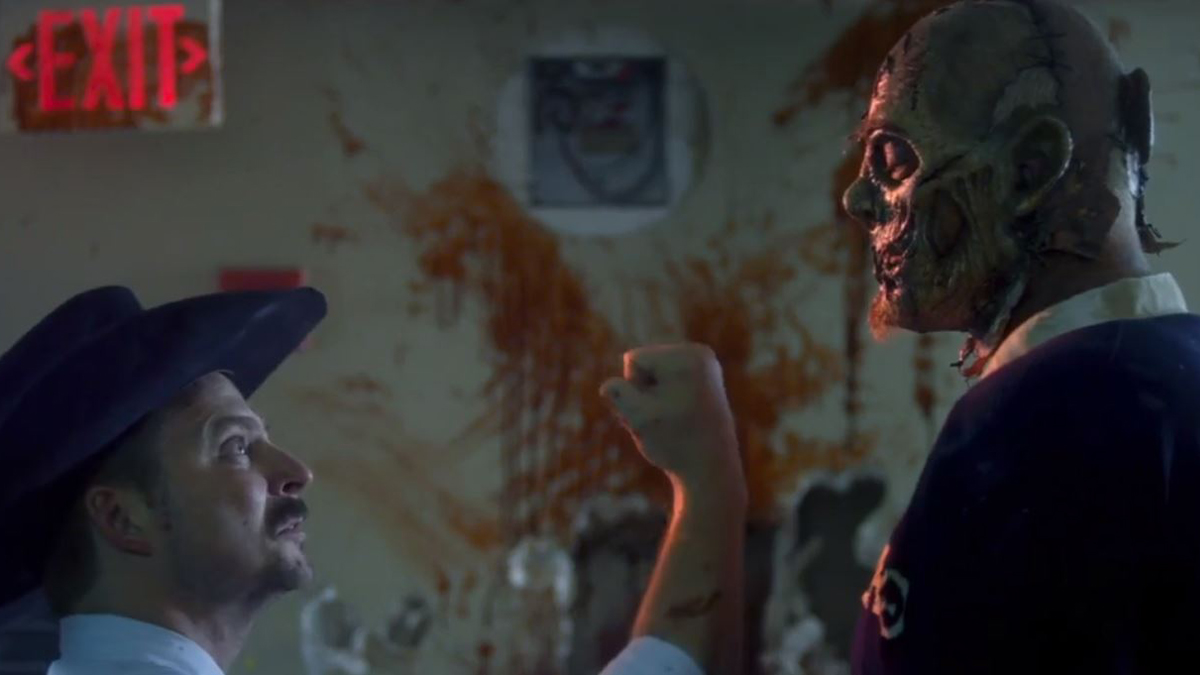 As the Devil’s Lake Impaler, Dustin Rhodes is not impressed by Jeremy King. Courtesy: Shudder.

It wasn’t all creeps and chills for Rhodes though. He had to balance the horror with the comedy bits the script called for mostly in a flashback sequence portraying better, happier days for the Devil’s Lake Impaler.

“It was fun because you actually got to see my face at that point. (Laughs) I have never ridden a tandem bicycle in my life. Tristan (Riggs) is such a great little actor, man. He held on. He trusted me. It was fun but it was so hot. It was like 110 degrees during those scenes,” said Rhodes.

Scare Package is just one part of the Dustin Rhodes double feature thus far in 2o20. On Prime Video, Rhodes is also currently starring in the film Copper Bill with Thom Hallum as two thieves eyeing $80-million of hidden drug money. Rhodes has also filmed a pilot for the television series Misanthrope which is being shopped around to various streaming services and television networks.

No matter where his cinematic journey may take him, Rhodes will always have a special place in his dark heart for the Devil’s Lake Impaler.

“I saw someone post on social media saying that the Devil’s Lake Impaler needs an entire backstory and I thought I am definitely up for that! Let’s do it!” said Rhodes with a cackle.