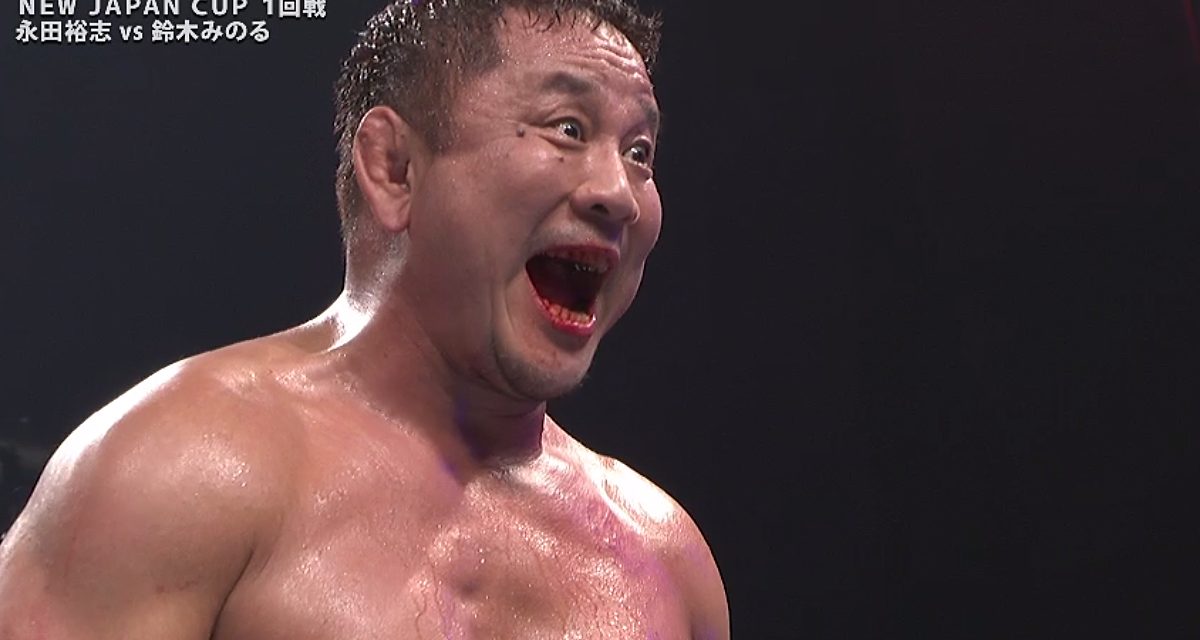 Two of NJPW’s respected war horses staked their claim on the NJPW Cup tournament with an outstanding and oftentimes brutal bout to watch on Night Two.

Yuji Nagata and Minoru Suzuki’s match consisted of them bludging each other with forearm shot after forearm shot, punch after punch, palm strike after palm strike until they were both sporting deep red and purple welts and bruises.

Suzuki though laughed, demanding more and more punishment, delighting in it. At one point, he even put his hands behind his back taunting Nagata. Nagata was happy to oblige. Official Marty Asami’s facial expressions during their exchanges were priceless and hilarious. 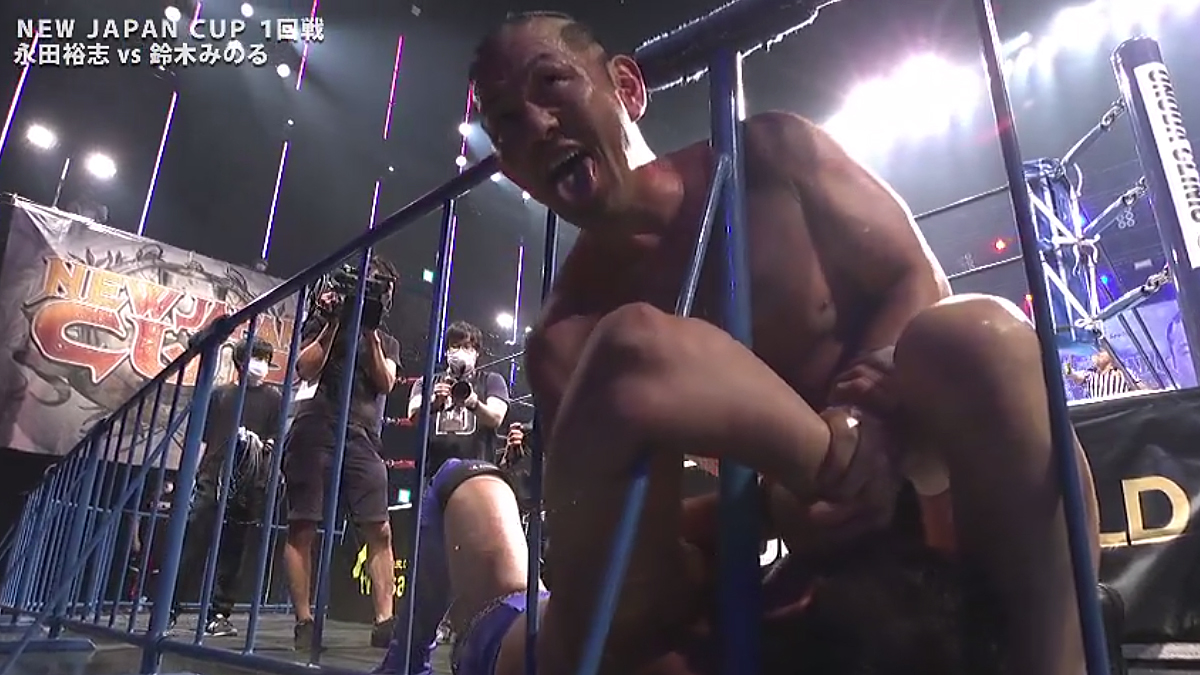 Suzuki is having fun at Nagata’s expense. Courtesy: NJPW.

After they starting off the match with an astonishing 11 minutes of clobbering each other strong style, Suzuki blocked a kick wrapping Nagata up in an ankle lock. Nagata rolled out to the floor. Suzuki followed grabbing a steel chair. Asami snatched the chair angering Suzuki which is something you just don’t want to do, ever. Suzuki shoved Asami to the floor.

Suzuki beat Nagata with a bucket and a water bottle as Asami demanded both competitors return to the ring. Suzuki snatched another chair from under the ring. Asami disarmed Suzuki again only to be thrown to the floor. Suzuki rushed back over to Nagata quickly hitting him with yet another chair then wrapped his arm around the ringside barrier inflicting even more pain.

Nagata refused to give take a step back as they returned to the ring. He dared Suzuki to strike him growling in his face. Suzuki was admonished by the official again for wrenching Nagata’s leg around a steel post. 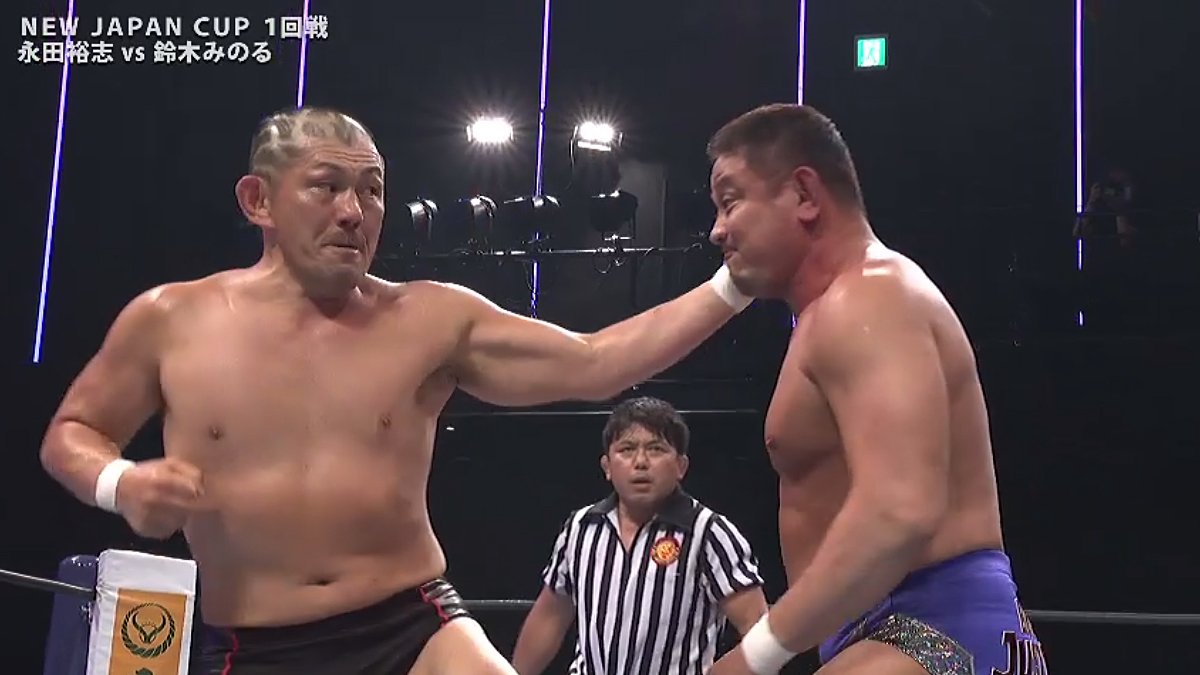 Nagata fought his way back into the match with a barrage of wicked kicks that had even the indomitable Suzuki wincing and grimacing. Nagata snapped Suzuki’s arm over his shoulder sending Suzuki screaming to the mat. When Nagata tried it again, Suzuki put him in a sleeper hold twice. Suzuki attempted the Gotch Piledriver twice. His mouth bloody, Nagata blocked it twice backdropping Suzuki.

Blistered and bruised both men engaged in yet another strike standoff whacking each other relentlessly. Blood began pouring from Nagata’s mouth.

With a sudden burst of energy that brought a sudden end to the match, Nagata suplexed Suzuki and pinned him with his Backdrop Hold (Bridging belly-to-back suplex).

During the middle of the event, an interesting promo aired introducing NJPW’s Way to the Grandmaster. Looks very intriguing to say the least whatever it might be.

Ishimori is wearing a samurai headdress and not his usual bone soldier mask. Kidd is one of the most promising Young Lions. That is true. At this point of this career he is no match for The Bone Soldier though. Ishimori makes Kidd tap out to the Yes! Lock.

Same situation as above in that Uemura is just out-classed facing a veteran. Uemura has the match of his young career but he is pinned by Deep Impact. After the match, Kanemaru pours whiskey on Uemura and has some words with Yota Tsuji who comes in to aid a fellow Young Lion. 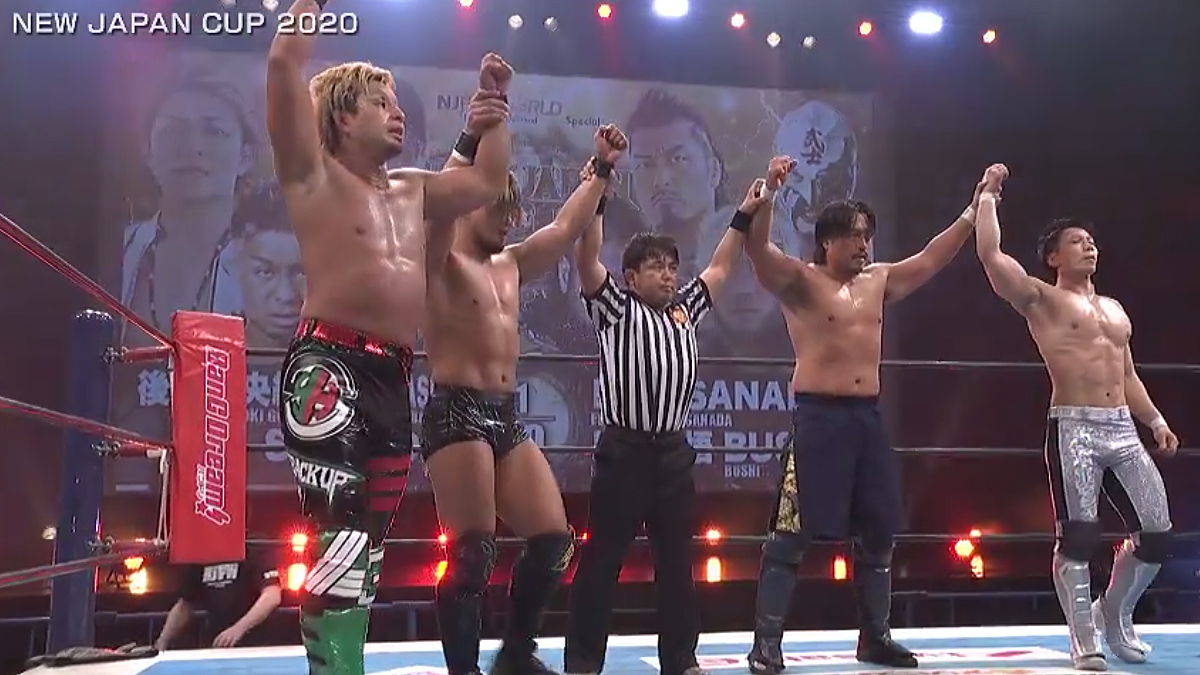 The match is positioned to highlight upcoming Cup matches including Sho versus Shingo Takagi and Yoh versus Bushi with those four getting a lot of ring time. Los Ingobernables de Japon storms the ring early on. Takagi pitches Sho into the ringside barrier while Goto and Evil exchange haymakers on the floor. Los Ingobernables de Japon tear into Yoshi-Hashi cutting him off from his partners. Yoshi-Hashi finally tags Sho so he and Takagi can match their power and speed. Things break down leaving Goto and Yoshi-Hashi to work over Bushi. Goto puts Bushi away with the GTW. 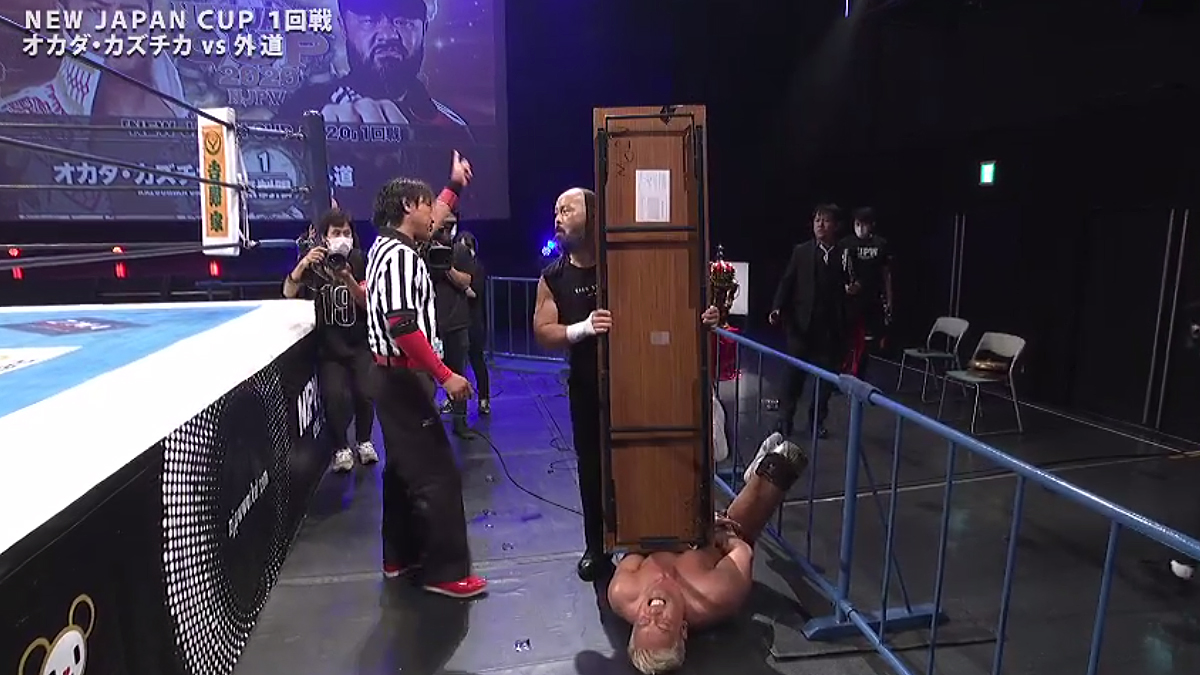 Gedo comes to the ring with his arm in a sling. He claims he cannot wrestle. He takes off the sling and attempts to spray something in Okada’s eyes but Okada knocks the offending bottle away. Gedo lies down on the mat asking Okada to pin him. Okada stomps on Gedo instead.

Okada reaches into the pocket of Gedo’s Bullet Club hoodie finding a pair of brass knuckles. As Red Shoes argues with Okada, Gedo removes a small wrench he has taped to his body. He hits Okada repeatedly in the ribs with it. Being slammed ribs-first into the ringside barrier doesn’t help matters either. Gedo kicks in Okada’s ribs while he lays on the arena floor.

Gedo has trouble setting up a table so he hits Okada in the ribs with it. Red Shoes threatens to disqualify Gedo.

Red Shoes shows his disapproval as Gedo damages Okada’s ribs some more but this time with a steel chair.

Okada makes his comeback blocking a Blade Runner. Jado comes down to the ring distracting the official while Gedo slips on another pair of brass knuckles. Okada knocks Jado off the apron and Tombstone Piledrives Gedo, making him tap out to a Cobra Clutch.

After two very predictable matches the event and a solid tag team match, the event brought us Suzuki and Nagata which was brilliant and brutal as well as Gedo and Okada which was dastardly heel fun at its best.