AEW Dynamite: Cody gets an ‘Absolute’ outside challenger 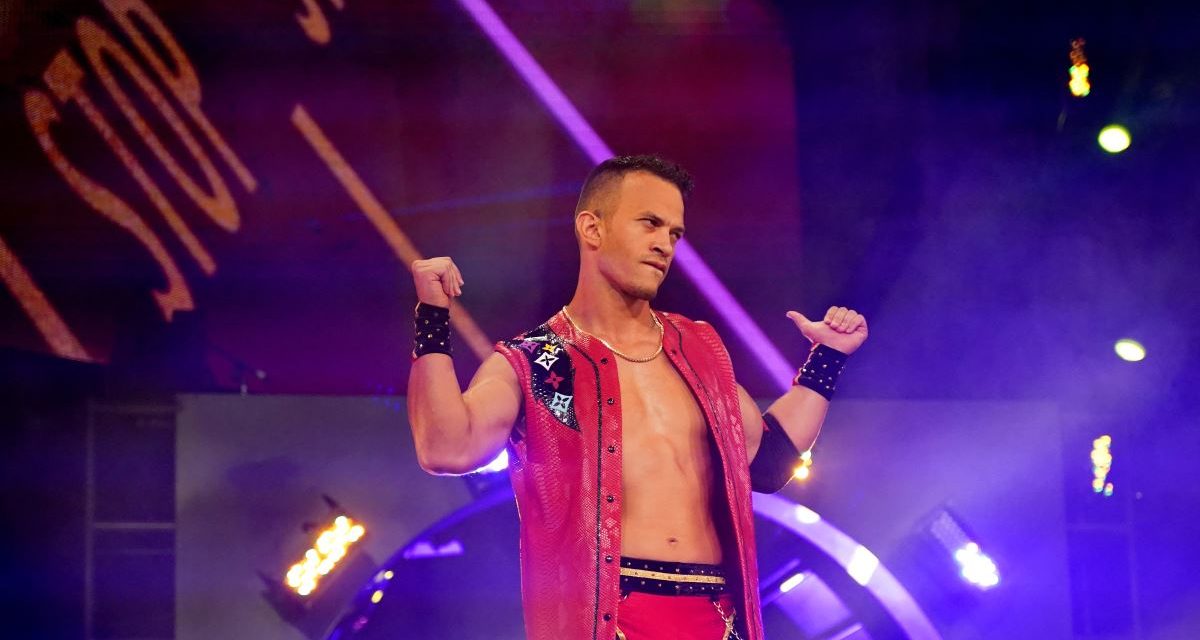 The idea that Cody will defend the TNT title against challengers from outside the company is one of those things that makes me smile. Why, who knows who might show up? It could be ANYONE! And while that’s said with tongue firmly in cheek (as in, I don’t expect Tetsuya Naito or even Marty Scurl to suddenly walk out of the tunnel), it is a fun way to shake things up a bit. This line of thought is relevant because tonight’s show will feature the first of those special guest stars, so let’s get to Daily’s Place in Jacksonville to find out who it is.

Before you scoff at the idea that the Natural Nightmares are getting a title shot here, they’re 5-0 since becoming a team. Dustin Rhodes looks a little shaken up in the early going after an accidental clash of heads, so hopefully he’s OK. Marshall is almost certainly going to come out of this match with a higher profile than before, which is good for him. Dr. Britt Baker is passing notes to Tony Schiavone, cementing her status as the most humorous injured wrestler in recent memory. After a number of curses get bleeped out during the action, Allie arrives on the ramp in time to see her man get pinned by the champs’ double team finisher. Good game, good effort, Nightmares.

A video package introduces us to Anna Jay, who is being billed as “The Star of the Show.” We’ll be the judges of that, thanks very much.

Abadon is giving off some kind of creepy Exorcist vibe, and … she wins? Has to be something else going on here …

Ah, OK. Mr. Brodie Lee and his henchmen head to the ring to hand an envelope to Colt Cabana that appears to have a contract of some sort inside. Props to Isiah Kassidy for photo bombing the shot of Cabana’s reaction to reading the document. The Dark Order also shows it isn’t sexist by helping Anna Jay out of the ring, perhaps looking to recruit her as well.

MJF seems to lose his enthusiasm for this match after just a few minutes, forcing Billy to go back up the tunnel and carry him back in. Austen Gunn proves unable to keep Wardlow from getting some shots in on his dad on the outside, which is pretty disappointing this close to Father’s Day. After struggling more than he would likely admit, MJF uses the Dynamite Diamond Ring to stay undefeated in 2020. He also exchanges pleasantries with Jungle Boy along the railing, and that ends up turning into a full-on brawl between the heels and Jurassic Express. A ton of other wrestlers end up in the melee.

Alex Marvez wants to know why Chris Jericho beat up Orange Cassidy last week, and it’s mostly because Freshly Squeezed chose to interrupt the Inner Circle twice. Le Sex Gods plan on giving the Best Friends the same treatment tonight and becoming the No. 1 contenders for the tag straps.

An unhappy Dr. Baker puts Schiavone a “friendship timeout” after hearing that Penelope Ford is getting a title shot next week on Dynamite. She tells her assistant to drive her off in her Gator, but discovers to her horror that Big Swole is behind the wheel. That’s probably not going to end well.

There are some deep thoughts on the mind of Cody as he ponders whether he is still part of The Elite and if the Nightmare Family is still a family. It’s lonely at the top, apparently. Arn Anderson says he knows Cody can beat Jake Hager, but the timing isn’t right for that at the moment. Instead, it’s time to reveal his charge’s mystery opponent: former NWA Television Champion Ricky Starks. Intriguing.

There’s something about Starks’ hair and some of his mannerisms that remind you of a cruiserweight version of a young Dwayne Johnson. Starks also wrestles like a heavyweight, with more power moves and less high flying than you might assume at first glance. He sells the heck out of the Cross Rhodes too as Cody retains, getting a handshake from the champ for his efforts.

Why do refs pat wrestlers down before the bell sounds? Well, maybe because someone might be sporting a pair of pliers like Jimmy Havoc is tonight. Things to keep an eye on here include Matt Jackson’s still-taped ribs and suddenly-relevant-again Butcher and Blade barking from the crowd. Havoc figures out a way to get a wet floor sign into play, landing a shot while Butcher and Blade are up on the apron. Given what’s been going down lately, it’s no surprise when FTR get a closer look, or when Ford intervenes in the match itself. The Bucks prevail anyway, ut the bell barely even rings before Butcher and Blade and FTR slide between the ropes. The face teams win the day

Taz wants to say something about Brian Cage, and while he’s still bitter about the last confrontation with Jon Moxley, the bigger surprise is that Cage can talk. He’s actually not bad, which makes you wonder why he ended up paired with Taz in the first place. The champ’s response is via recorded video.

We want, nay need, an update on Baker. Her assistant finds the Doctor in a dumpster, and a frantic Baker goes off about why it took so long and why Schiavone isn’t there to check on her. Baker also says she’ll pay Swole back for this if it’s the last thing she does.

Matt Hardy joins the announcers in his “Unkillable” persona to help call the main event.

Whoever wins this bout becomes the top contenders for the tag team titles, so this is the part where I make my weekly mention about how it’s unfair that Best Friends haven’t had their title match yet. They still have to make it two more weeks, at least! Hardy talks about his upcoming meeting with Sammy Guevara and claims he will let the Spanish God pick which of Matt’s personalities he’ll face. Lots of cool spots for everyone involved here, including Best Friends’ two-man superplex. The heels attempt to steal a win by raking the eyes and grabbing some tights, and Guevara hits Trent with Floyd and follows with a shooting star press but only gets a two count. Trent responds with the Crunchie and gets the victory.

Where has Orange Cassidy been? Turns out he’s been disguised as one of the cameramen, but he reveals himself and gets a measure of revenge on Jericho. That’s an angry Orange, but we’re also out of time for this week. See you in seven!

Thanks to some good tag team matches and the mystery TNT title challenger, this was another very good edition of Dynamite. AEW is doing a nice job pacing these shows to avoid just spinning their wheel until Fyter Fest, though there’s still one more installment to go before we reach the non-pay-per-view.