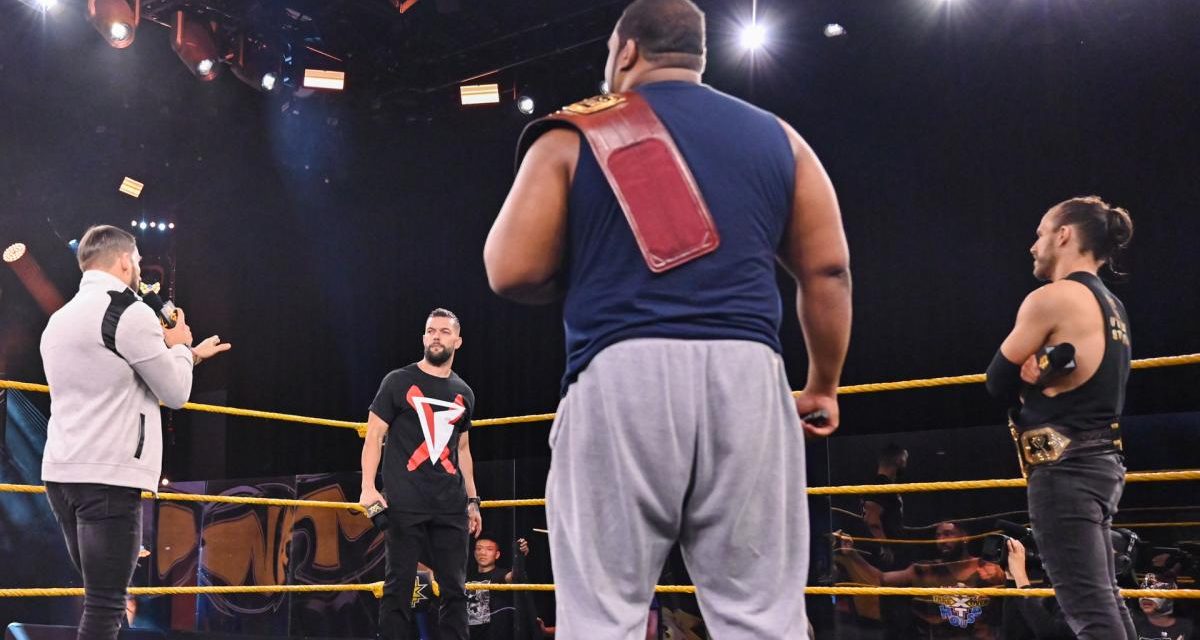 The NXT Champion had to deal with every challenger imaginable coming out of the woodwork this week.

First, it was Keith Lee who put Cole on notice disrupting his backstage interview.

“It isn’t going to be Karrion Kross. It is going to be me!” shouted Lee about dethroning Cole. Lee then smashed the hour glass Scarlett gave Cole last week.

Shaking his head, Cole continued his way down to the ring where he cut a promo saying it boggles his mind that people can just show up in NXT and think they can just challenge him for the championship. Cole reveals he has his eyes set on the NXT North American Championship.

Keith Lee responds to the challenge. He doesn’t have time to utter a word though as out comes Johnny Gargano. Gargano reminds Lee that he pinned him last week and deserves a shot at the title.

“But, why stop there?” says Gargano looking across the ring at Cole.

Finn Balor crashes the party. He tells those in the ring to stop being marks for themselves.

“I don’t wait in line. I cut to the front,” Balor tells Gargano as he steps up to both Lee and Cole.

To make sense of this promo pandemonium, General Manager William Regal appears on the Titantron from home.

He has a great idea. Next week, Keith Lee will put up the NXT North American Championship against both Johnny Gargano and Finn Balor. Whoever wins that match will go on to face Adam Cole for the NXT Championship on July 8th in a winner take all match.

Breezango mimics Imperium’s entrance. Their theme though has a dance beat to it. Imperium snaps pouncing on Breezango. Marcel Barthel stomps Breeze in a corner taking exception to the ring entrance. Fabian Aichner tags in grabbing Breeze by the hair and screaming into his face. Breeze is driven head-first into the Plexiglas barrier. Breeze is in very bad shape, unable to tag out. Breeze sends Barthel to the floor giving him a chance to get the heck out of the ring. Fandango is a house of fire clearing the entire ring. He dives outside the ring knocking over both members of Imperium. Aichner tackles Breeze who crashes into Fandango after they hit the Faux Pas to halt any kind of pinfall. Fandango hits the Last Dance but once again the pinfall is averted. Indus Sher, Oney Lorcan and Danny Burch start brawling on the floor causing mass confusion. Aichner DDTs Fandango for the victory.

Velveteen Dream is interviewed while he sits on his couch. Tom Philips asks what’s next for him now that he cannot challenge Adam Cole for the NXT Championship any longer. From behind the couch Dexter Lumis appears dropping a painting off and then he disappears. Philips asks if Dream would ever team with Lumis. “This is a misunderstanding,” says Dream looking at the painting which shows him and Lumis as tag team champions. Dreams says he returned the favour to Lumis. “This means nothing. The Dream is a solo act,” says The Dream about the painting before tossing it away. Yikes. Not a good move, Dream. Wait and see.

Love Priest but he needs a better persona. Why the archery stuff? He doesn’t even carry a bow? So, he’s a rock star archer? WWE needs to make him into the next monster, sorta like The Undertaker when he led The Ministry of Darkness. Priest’s current character is just a muddled mess. Priest leaps over Dain and injures his back. Dain drops sledgehammer blows on Priest’s back. Priest howls in pain after Dain lands a 300 pound guillotine leg drop. Ouch! Dain doesn’t sell Priest’s punches and kicks. He suplexes Priest repeatedly on his back for a two count. Priest struggles to stand but dodges a charge by Dain. Dain crashes into a corner. The match breaks down into a slugfest. A clothesline finally topples Dain. Priest executes The Reckoning and Dain goes down in defeat.

In a promo, Santos Escobar vows to rewrite the history of Lucha Libre. Good luck with that, Santos. Killian Dain is making his way to the backstage area. He sees Robert Stone drunk and leaning against the ringside barrier. He smashes it knocking Stone for a loop.

Aliyah rushes over to Robert Stone helping him up to his feet. She drags him to and props him up in her corner. Aliyah takes Li off her feet with a Northern Lights Suplex. Li fights back with some well-placed kicks. Robert Stone staggers onto the apron and vomits into the ring. In what looks like a miscommunication or a botch, Aliyah attempts to pin a distracted Li but Li kicks out. Aliyah repeats the move this time pinning Li. Stone falls off the apron to the floor. Aliyah attends to Stone scraping him off the floor.

In a promo, Timothy Thatcher conducts training at a wrestling school playing the role of a stretcher, putting his students through painful submission holds. More to come next week.

The Undisputed Era take Roderick Strong to a therapy session to get over his fear of Dexter Lumis. Things don’t go so well as Strong freaks out over reliving his experience in the trunk. Instead of facing his fears and getting into a trunk outside, Strong runs off down the street.

In the backstage area, Candice LeRae throws more of those weak, horrible punches of hers as she and Mia Yim brawl.

Kacy Catanzaro is in Carter’s corner and Raquel González is in Kai’s. Carter has really come into her own and should be pushed harder than she is. She is far better than the more experienced Dakota Kai whose arsenal consists of kicks, kicks and more kicks? Carter takes down Kai immediately raining down punches on her. Carter executes a beautiful springboard drop kick sending Kai head over heels. Carter has to deal with González constantly interfering but doesn’t back down from her. Kai is caught coming back into the ring by Carter who drives her down into the mat face-first. González and Catanzaro square off. Kai submits Carter.

We are treated to black and white video footage of Scarlett finding the broken hour glass Keith Lee smashed. Karrion Kross steps on the broken glass. Mercedes Martinez reminds us she is back in NXT.

Leon Ruff is all fired up, I mean, like, really fired up. Reed mows him down, frog splashing him from the top rope for the literal squash.

Reed calls out Karrion Kross. He challenges him to a match next week. Reed is such a nice guy. He helps Ruff up and carries him to the back.

In the parking lot, Damian Priest has found the tires of his car have been slashed. Cameron Grimes drives by laughing.

Santos Escobar is backed by Joaquin Wilde and Raul Mendoza in the ring. Escobar is not sad that he dumped his former persona. He wants to be a leader not a luchador. Drake Maverick storms the ring but the numbers are too much for him. He is dropped across the steel barricade, hit with a monitor in the back. Escobar gives Maverick a Phantom Driver through a table. Maverick is taken away on a stretcher and loaded into an ambulance.

The crowd cheers for their NXT reps ticking off Banks and Bayley. Banks and Bayley continue to act like high schoolers, sticking out their tongues and waving their belts around. Blackheart and Nox team up causing Banks to scurry to her corner. Bayley demands the Blackheart respect her. Blackheart has Bayley off-kilter until she takes a knee to the head. Blackheart screams her war cry and just mangles Banks with a devastating drop kick. Blackheart swings Bayley into the turnbuckle. Nox and Blackheart execute synchronized cannonballs on the champs. Nox chokeslams Banks on Bayley. Blackheart crushes them with a flying bodypress on the floor. Blackheart breaks out of the Banks Statement and puts Banks into submission. Bayley brings a chair into the ring. Nox takes it out of her hands. As the official reprimands Nox, Bayley helps out Banks who forces Blackheart to submit to the Banks Statement.
Io Shiri rushes out of the back. She takes out both Banks and Bayley who then hit the road.

Although some might think it was overbooked with everyone getting their television time by hook or by crook, it was the best NXT show in weeks. Lots of angles were advanced and some above average matches. NXT is not back to its prime just yet but it is taking positive steps in the right direction. It really didn’t need Banks, Bayley or that title match though. That match could have been used to highlight NXT talent.