New Japan Cup Night One: Ishii takes a bite out of El Desperado 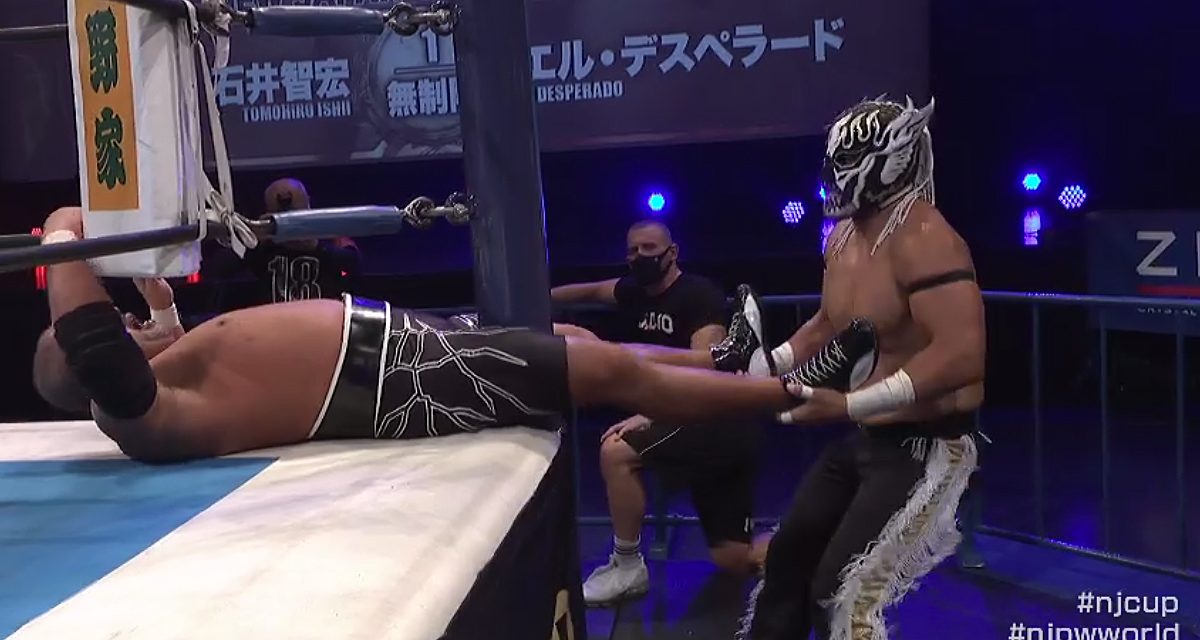 The war between Chaos and Suzuki-gun continued on the first day of the New Japan Cup Tournament with Tomohiro Ishii taking on El Desperado in the main event of the evening.

Desperado reclined in the ropes smirking as The Stone Pitbull made his way to the ring. Desperado made fun of their height difference as they locked up.

Ishii dared Desperado to hit him. Ishii got the better of that exchange pummeling Desperado with forearm smashes and a shoulder block.

There was nothing fancy about Ishii stomping on Desperado’s throat. Desperado changed up his strategy working on Ishii’s left leg and knee wrapping it around a steel post then throwing him into the steel barricade. 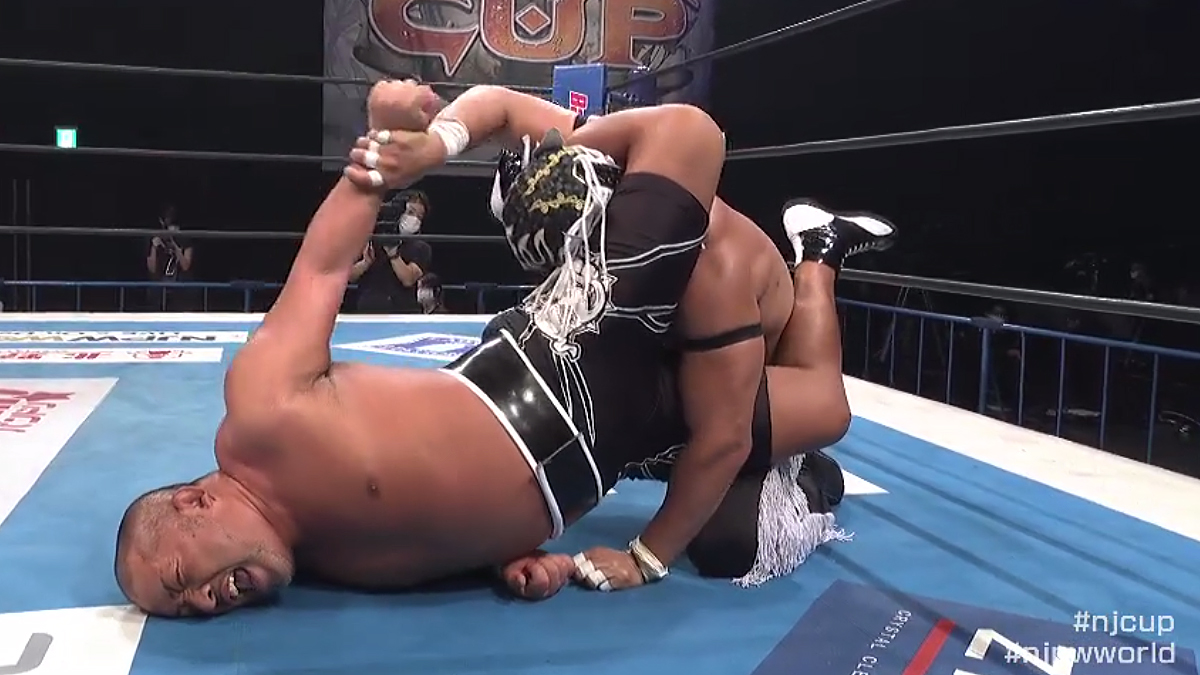 His leg a little worse for wear, Ishii finally regained the advantage with a flying shoulder tackle followed up by a barrage of chops and forearm shots in a corner leaving Desperado in a crumbled heap on the canvass.

Desperado defaulted to Numero Dos (Arm-Trap Over-The-Shoulder Single Leg Boston Crab) every chance he got but Ishii refused to submit each and every time. Just as it was looking like Desperado was going to put Ishii away, Ishii gave him a vicious headbutt, a lariat and his Brainbuster for the win.

Tsuji shows some fire shoving and spearing Makabe right out of the gate. Tsuji follows Makabe to the floor just to get whipped and speared into a barricade. Makabe takes over beating Tsuji to a pulp in the ropes. Tsuji fires back but he might as well be throwing hands against a brick wall although he manages to suplex Makabe which is no small feat. There is lots of fight in Tsuji. It is not quite enough though to beat the veteran. Makabe pins him with a Lariat and a German Suplex. 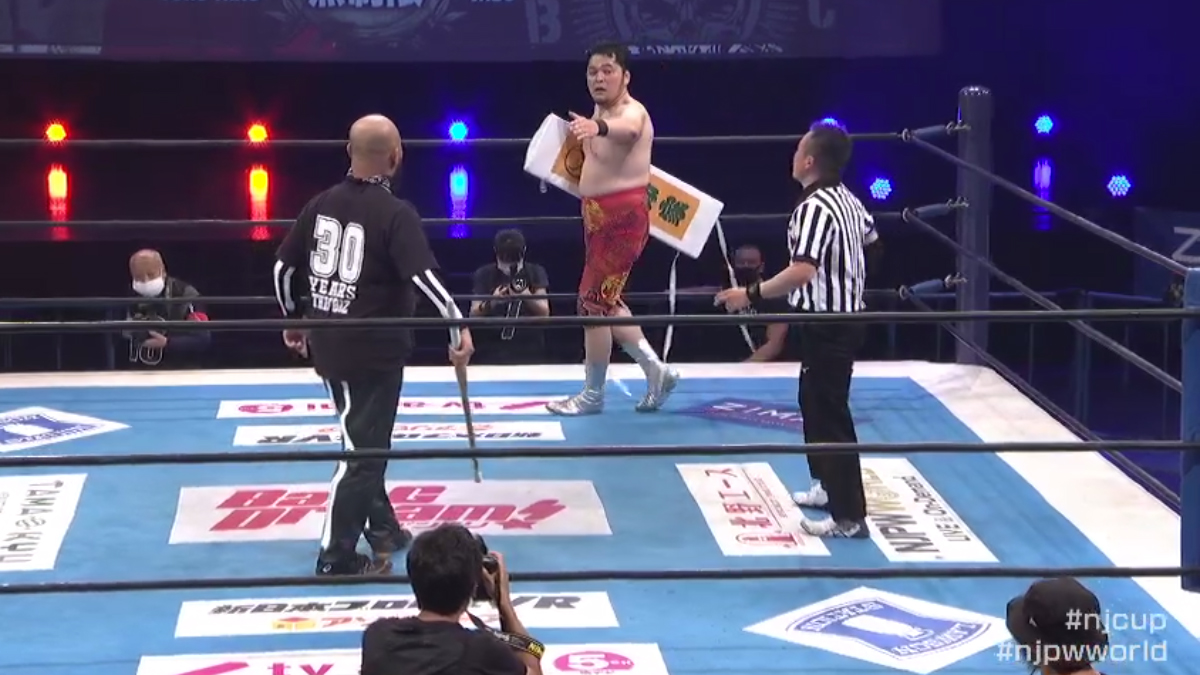 Yano and Gedo in a showdown. Courtesy: NJPW.

Jado has brought not only Gedo but also Yujiro Takahashi with him to the ring. Yano sprays his sanitizer all over Jado and the referee. Yano leads his own cheering section. Jado does the same. Yano mocks Jado. Jado and Yano have a turnbuckle, kendo stick showdown in the middle of the ring. Each refuses to put down their weapon.

Jado tricks both Yano and the official by not tossing away the kendo stick as agreed. The official takes away the stick anyway. Yano clobbers Jado with the turnbuckle pad. As the official checks on a fallen Jado, Yujiro attacks Yano throwing him into the ringside barrier over and over before rolling him back into the ring.

While Gedo distracts the official, Yujiro and Jado double-team Yano. Jado comes close to pinning Yano. Yano thwarts both Jado and Gedo giving them a double punch to the crotch. Yano rolls up Jado for the pin. 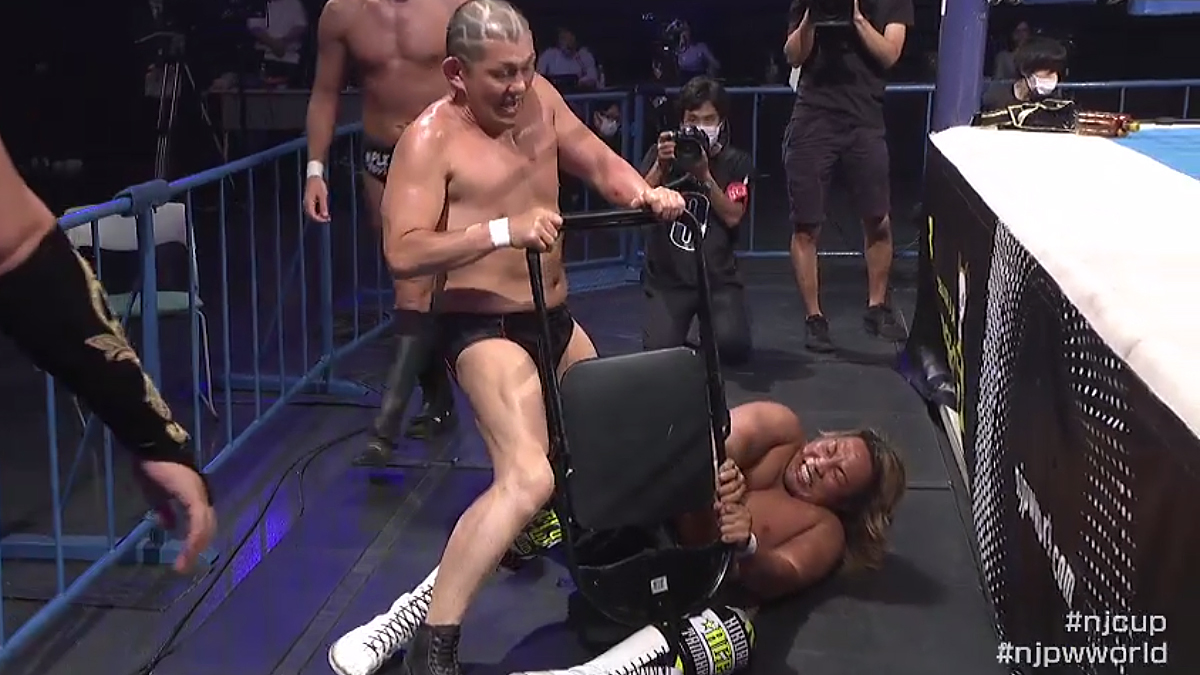 Suzuki gets a little help from a chair. Courtesy: NJPW.

Suzuki-gun uses the match as an opportunity to soften up their tournament opponents. They punish Tanahashi’s knee with a steel chair again and again. Uemura takes Kanemaru’s whiskey bottle to the head. Suzuki pins him with the Gotch Piledriver. Taichi attacks Tanahashi after the match while Suzuki and Nagata trade blows in the ring walloping the heck out of each other.

Honma proves he still can hang with the younger NJPW talent. A super kick, a running Death Valley driver onto the turnbuckle and a Time Bomb pins Honma.

Despite the lack of true marque matches it was a decent first night of NJPW Cup action.