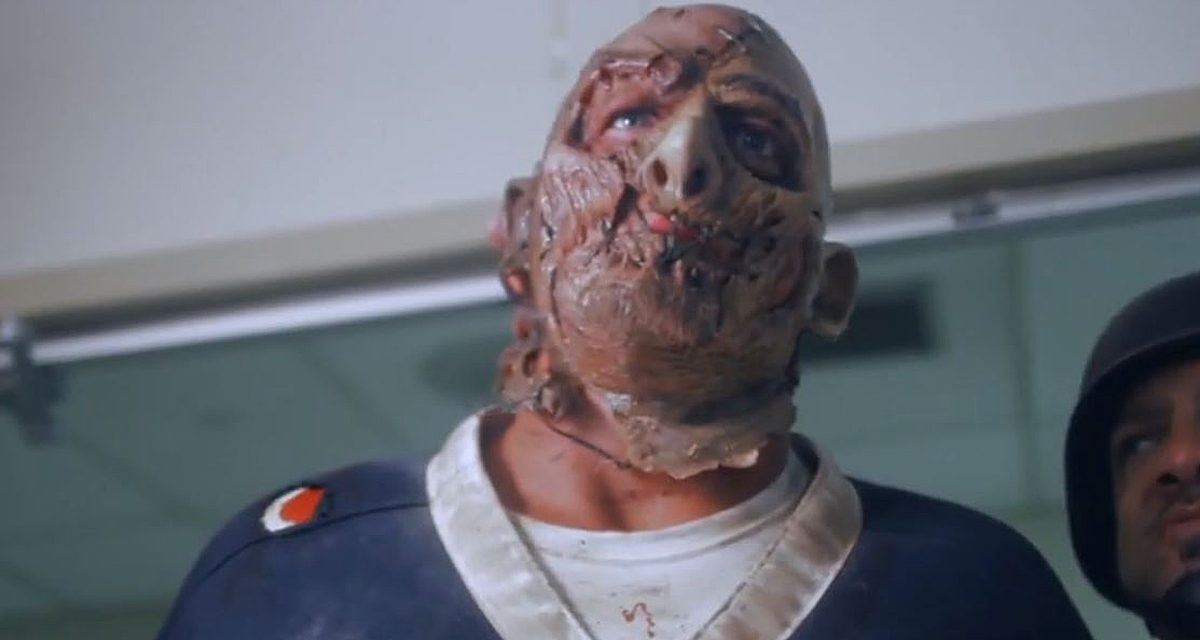 The final girl. The jump scare. Death by sex.

There are more horror movie tropes than you can hurl a machete at. The funny thing is that even though they have been recycled time and time again since the days of The Cabinet of Dr. Caligari and Nosferatu, they never get old. Scare Package is a clever and humourous homage to all of those familiar horror movie clichés by a team of filmmakers who bleed horror. It debuts on the horror streaming service Shudder June 17th although it was shown Friday night as a part of The Last Drive-In with Joe Bob Briggs.

Much like Creepshow, Scare Package is an anthology comprised of seven segments spliced together by not just one but two central stories.

The film opens with the first and it’s a parody in a parody. Jon Michael Simpson plays Mike Myers, a struggling actor who although he aspires to be so much more, is perpetually cast as the cold opener, the lead-in guy. He’s the shady real estate agent who sells the haunted house to the naive couple. He is the prison guard who is overpowered by the incurable psychopath allowing him to escape. He is lab assistant who taunts and angers the mutant gorilla-racoon-snake-panther-flea in the first place sparking a rampage the likes of which has never been seen by Vernazza, Italy.

He is always trouble with a capital ‘T’. 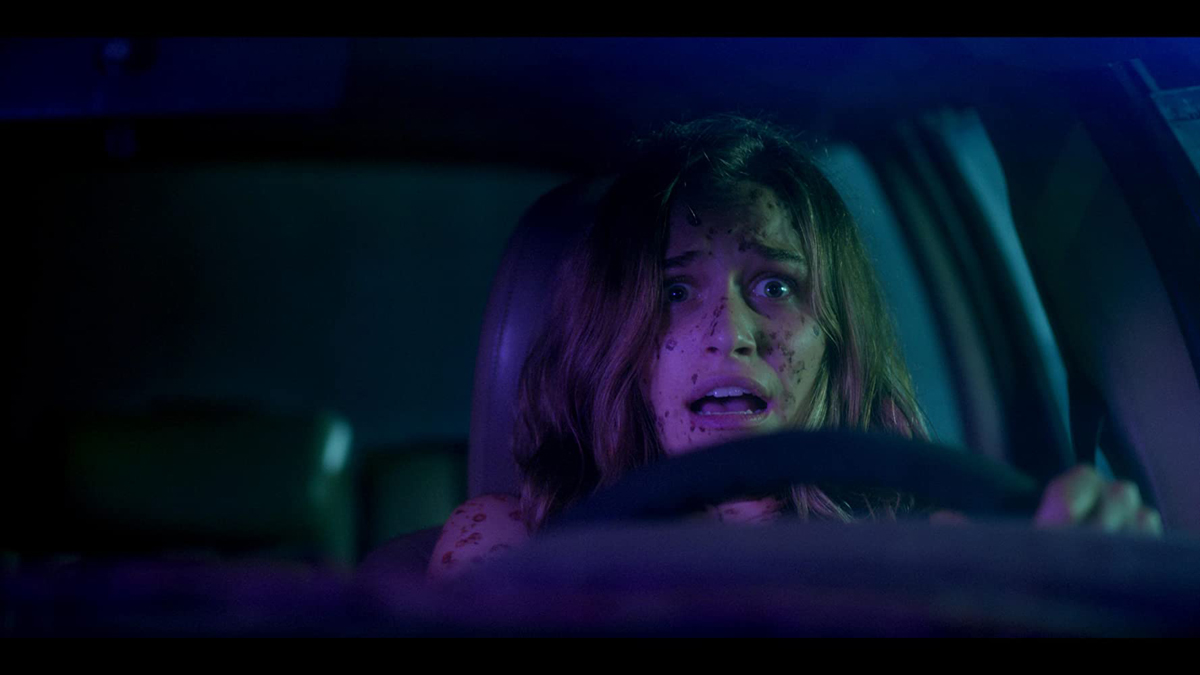 Zoe Graham is a little worse for wear in Scare Package (2019).

Following a spoof of every Halloween, Scream, babysitter butchering series ever, Myers briefly crosses paths with Chad Buckley the owner of Rad Chad’s Horror Emporium video store. In order to bring his newest employee up to speed, Chad spins a series of nightmarish tales to prove his theories.

As with any horror anthology some of the stories are better than others. The big finale Horror Hypothesis is naturally the longest, most involved of them all tying up all of the loose ends and has two guest stars. One is a horror icon and the other is wrestling legend AEW’s Dustin Rhodes who was also known as Goldust in the WWE. Rhodes is the Devil’s Lake Impaler, a mash-up and send-up of Freddy, Jason and Michael Myers all rolled into one. Rhodes shines as bright as Dracula’s candelabra as the Devil’s Lake Impaler. He has almost no lines at all so he must convey emotion through facial expressions and body language which he is used to doing as a professional wrestler who tells his story to not only the fan in the first row but also the fan in the nose bleed section located somewhere between Ivujivik, Quebec and Fort Severn, Ontario.

Besides the bookending segments, my favourite stories were One Time in the Woods and The Night He Came Back Again! Part IV: The Final Kill. In Woods, campers collide with a savage beast while in The Night He Came Back a bickering band of survivors attempt to end an indestructible killer forever through various diabolical means.

Scare Package’s humour is also gleefully injected into its gore and violence which has sometimes mirrors a Looney Tunes cartoon. Some scenes are so completely outrageous they summon up memories of the Evil Dead series which also successfully fused madcap comedy with the grisly carnage horror fans live for. 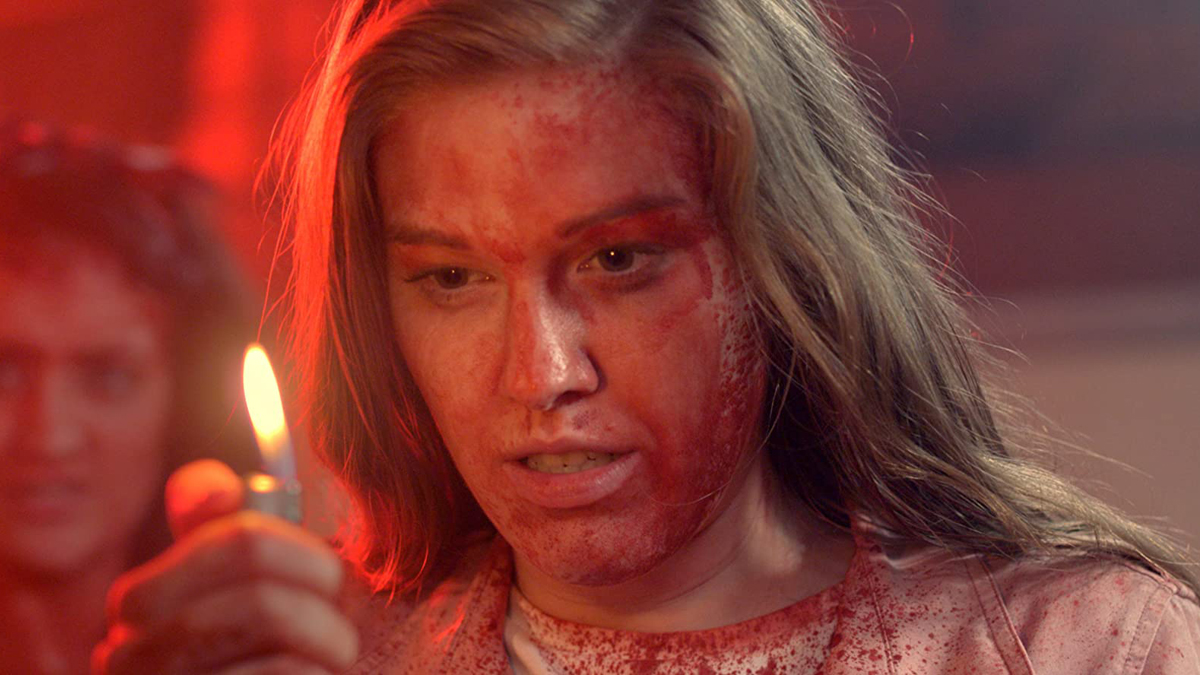 Scare Package brings a number of writers and directors together including the Andujar Twins (Courtney & Hillary), Anthony Cousins, Emily Hagins, Aaron B. Koontz, Chris McInroy, Noah Segan and Baron Vaughn, the voice of Mystery Science Theater 3000’s Tom Servo, Donatello in Batman vs Teenage Mutant Ninja Turtles. He also starred as Nwabudike Bergstein in Grace and Frankie and as Baron in Corporate. Although each has their own sense of style they have all come together to spawn the best horror comedy since The Final Girls, Tucker and Dale vs Evil and Behind the Mask: The Rise of Leslie Vernon, (which is also currently on Shudder and should not be missed).

The film is not without its rough spots. Even though the effects themselves, the direction and the stories are up to par, some of the acting here and there is as stiff as a corpse in Haddonfield Memorial Hospital and some of the gags, humour falls flat. Some of the stars are not ready for prime time just yet.

No matter who we are, no matter where we come from, we have to be able poke fun at ourselves, not take ourselves so seriously all the time. Horror films can be shocking, creepy, chilling and sometimes even insightful. They can also be silly, ridiculous and brainless. Scare Package is a sly prank on the horror industry. A prank that would even put a smile on Frankenstein’s moldering face.

Despite its minor shortcomings Scare Package is a heart-felt and hilarious homage to those endearing and immortal horror tropes.