AEW Dynamite: Omega-PAC goes to OT, Jericho-Moxley weigh-in gets bloody ahead of Revolution

The wait is almost over. The wait for AEW Revolution, that is, as tonight’s show from Kansas City is the final stop before the big card on Saturday night. Most of the big players will no doubt be heard from, including Chris Jericho and Jon Moxley, who will weigh in ahead of their Revolution main event. It definitely shouldn’t be boring, so let’s head to the Silverstein Eye Centers Arena in Kansas City, Missouri, and get things started, live on TNT.

Have to love the clock counting down the time with a graphic showing the falls each man has earned. The announcers set up the narrative superbly, with PAC laser focused on getting revenge but Omega mostly consumed with the tag team titles and drama between his partner and the Young Bucks. Will this be an Iron Man Match where there are a ton of falls or one where just having a lead will be huge? Considering the way the two wrestlers kick out of finishers over the first 15 minutes, it appears to be the latter. PAC ends up clocking Omega with a steel chair shortly after the halfway point, giving an Omega one fall by DQ (the first disqualification in AEW history, sure to be the answer to a trivia question someday). The idea is that the damage is worth the deficit, and he quickly hits a Black Arrow to tie the score. That’s the way it stays until the final minute, when PAC has the Brutalizer locked in, albeit on his back with Omega on top of him. Kenny never taps out, and after PAC takes his frustration out on the ref, the match restarts under sudden death rules. Overtime wrestling, folks! A One-Winged Angel finally wins it for Omega.

Tony Schiavone tries to get a word with PAC, but is interrupted by the arrival of Orange Cassidy. The Bastard tries to squeeze some more juice out of Cassidy with a shot to the face, but AEW officials quickly intervene.

Backstage, there’s no getting a word in with Chris Jericho, as Jake Hager is cutting the interviewer off at the dressing room door.

Say what you want about the size of Marko Stunt or the occasional awkwardness of Luchasaurus, but Jurassic Express is simply fun to watch as a three-man unit. They’re matched well here too, resulting in a bout that just zooms right along. Guevara tries to cheat to win, but Darby Allin makes sure he can’t, and Jungle Boy is able to get the pin for his side.

A hype video for Cody and MJF replays their entire feud and does an effective job of keeping their match at Revolution top of mind.

These two teams are just outside the top contenders tier, but they’ve both been trending upward in recent weeks. Their wrestling is fine as usual, but the people eventually get what they came to see, which is an in-ring confrontation between The Bunny and Orange Cassidy. She steals his sunglasses, he steals her bunny ears, and the Best Friends end up with a win. Schiavone enters the ring afterward to reveal another match for Revolution: PAC vs. Orange Cassidy. Yes, he’s actually going to wrestle. “This time, he’s gonna try!” promises Chucky T, though Trent says he’s unsure. Cassidy gives a bit of a thumbs up, so take that as you will.

Hearing Excalibur and Taz try to explain Sakazaki’s anime-influenced gimmick to a befuddled Jim Ross is worth the price of admission all by itself. The right wrestler wins this match, and that’s Shida, who deserves a title shot sooner rather than later.

And now a word from the Dark Order, who says the Exalted One is near. Before he arrives (assuming “he” is even his preferred pronoun), Evil Uno and Stu Grayson are going to take on SCU, and oh, Uno promises SCU are going to find out they are obsolete. Now which wrestler in another promotion do we know who used to love that word …

J.R. has Omega, Adam Page, and the Young Bucks all in one interview, and it’s probably the best segment featuring four guys pretending to be uncomfortable in recent memory. It ramps up after a while with Page and the Bucks getting into it over the idea of the Elite being bigger than who holds the gold. Omega squirming in his seat during the bulk of the segment is priceless.

Gary Michael Cappetta is in the house, ready to class up the weigh-in for the title match between Jericho and Jon Moxley. The fans singing along to Jericho’s entrance music has become a big thing, and Le Champion and his Inner Circle cronies walking out in matching tracksuits definitely makes it feel like the weigh-in for a boxing or MMA pay-per-view. Jericho objects to being asked to step on the scale first, so Mox takes off his boots and hoodie to weigh 234 pounds. As he is wont to do, Jericho stalls for a bit, riles up the fans by insulting a local sports hero, and … never makes it to the scale as he gets in Moxley’s face and gets a headbutt for his trouble, bloodying his nose. The Inner Circle comes to its leader’s aid, pummeling Moxley, but Dustin Rhodes comes down to battle Jake Hager all the way back to the concourse, where J.R. actually says the line “the damn Dippin’ Dots didn’t do anything to anybody.”

Allin and his skateboard also hustle to the ring, where Guevara greets him and breaks the skateboard over Darby’s head. Naturally, Jericho and Moxley end up face to face, but a low blow from Santana leaves Moxley wide open for the Judas Effect. Jericho executes the Paradigm Shift on the platform with the scale, and Le Champion raises his arms in triumph as his music hits. That’s a pretty nifty way to leave things before Revolution, so enjoy the show and we’ll see you in seven! 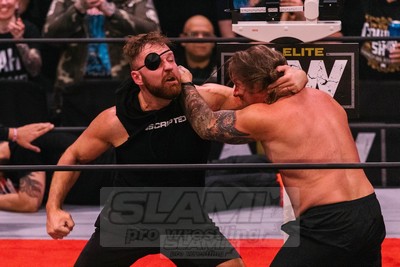 Jon Moxley and Chris Jericho battle during the weigh-in. All photos by Chris Manning. CLICK HERE for a larger version of the photo 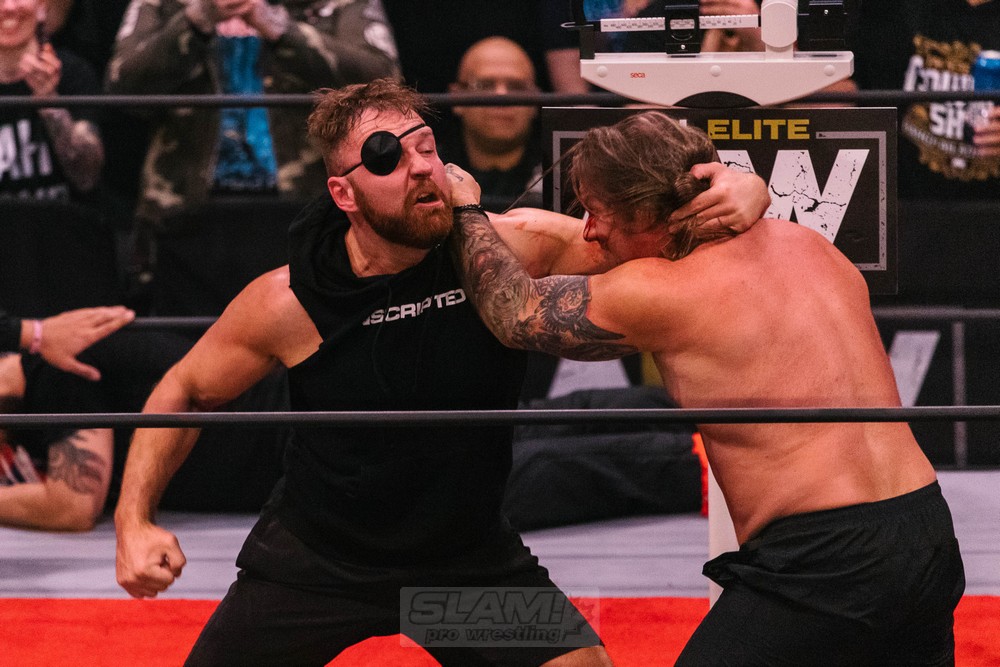 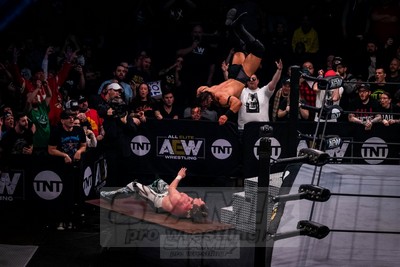 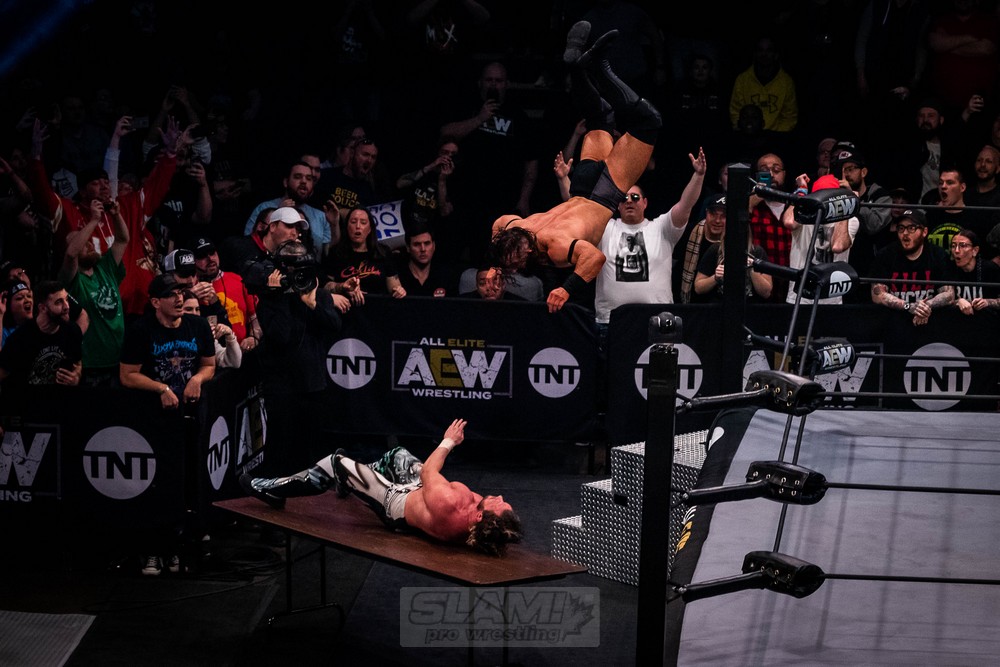 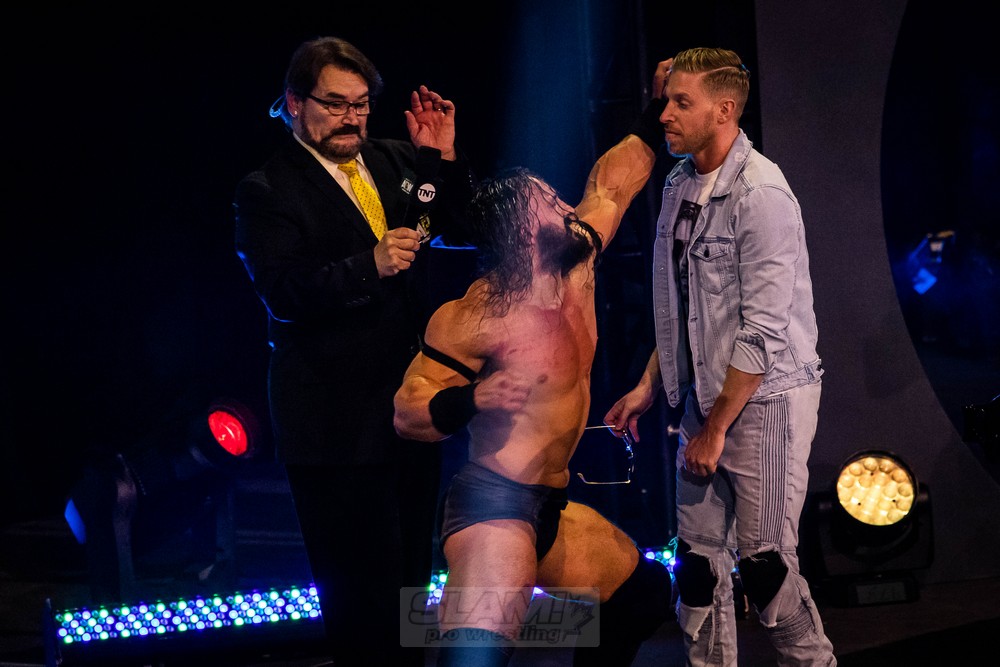 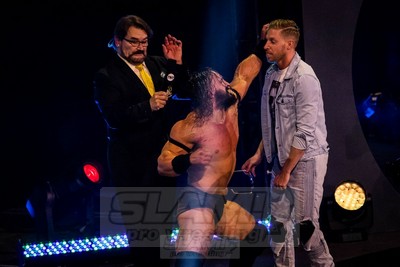 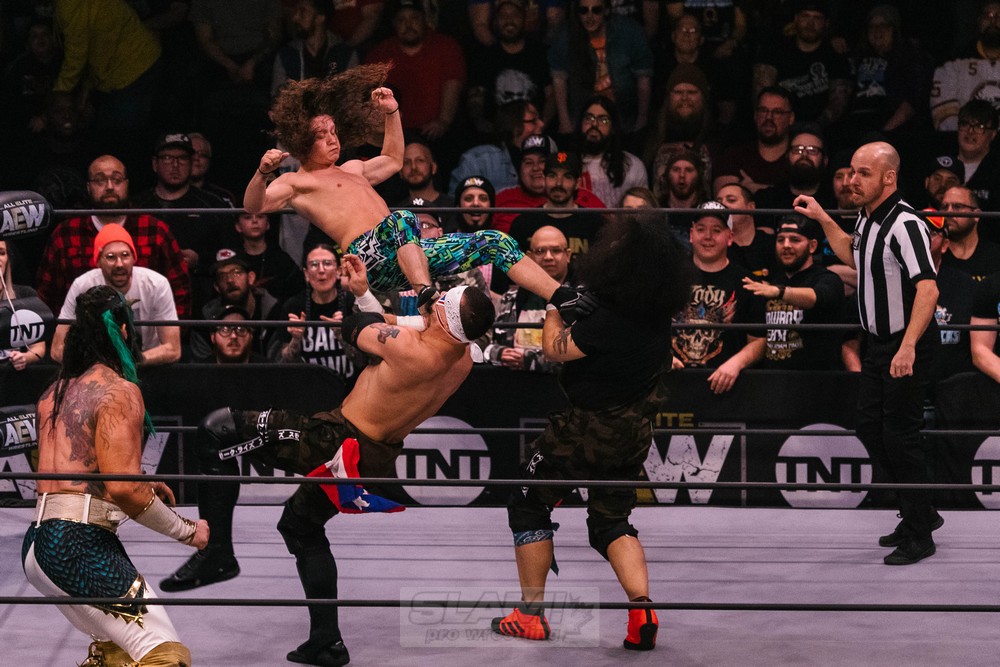 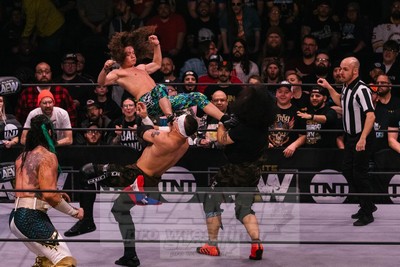 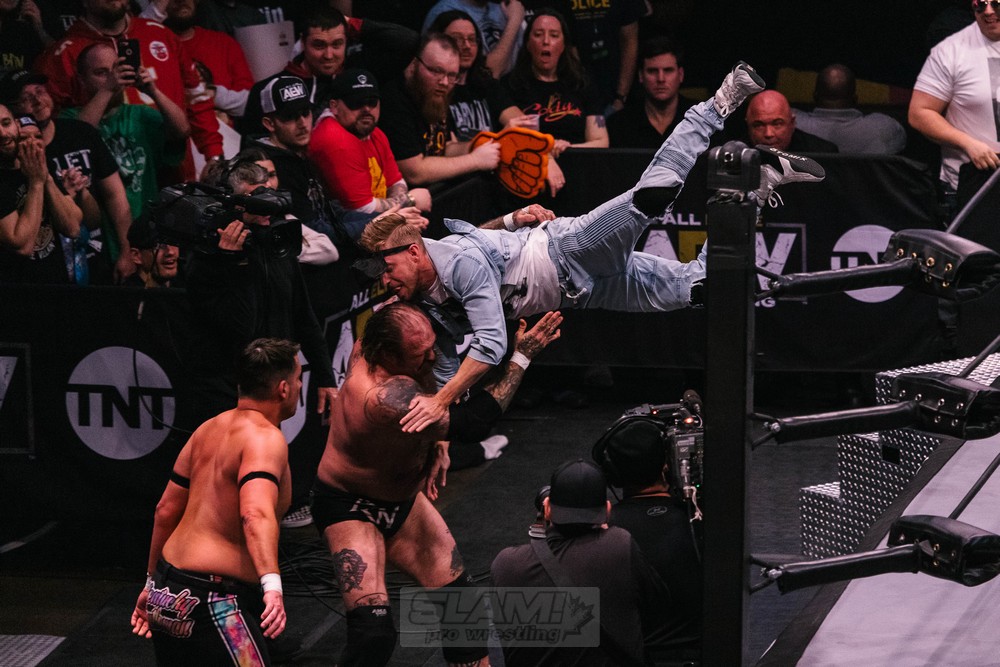 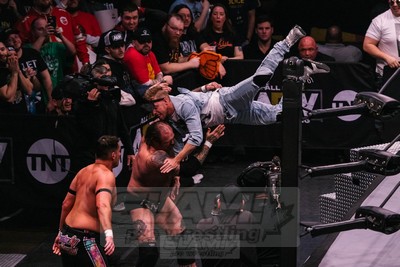 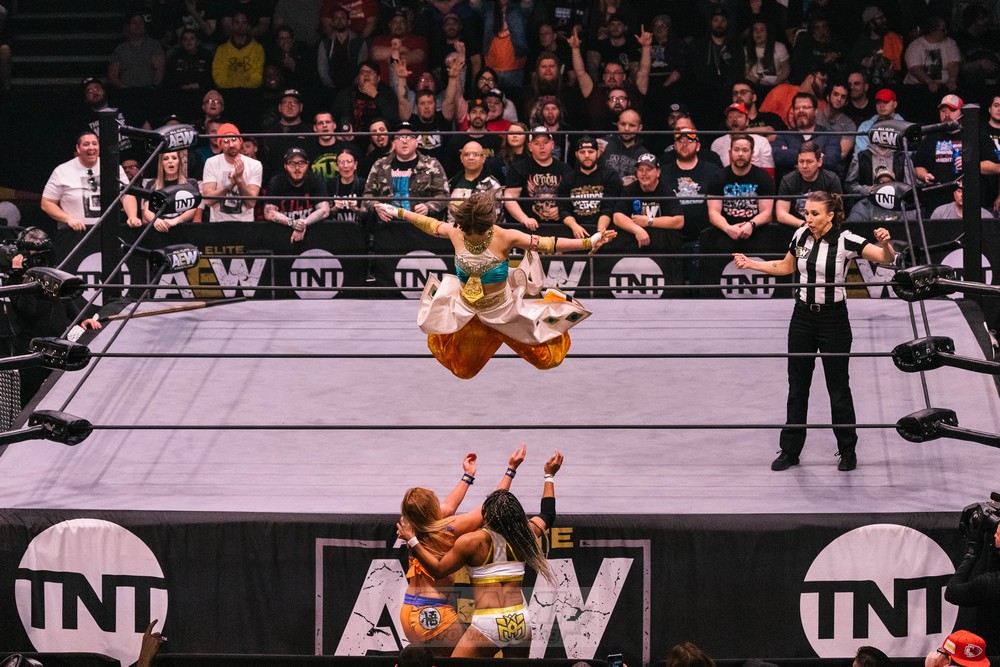 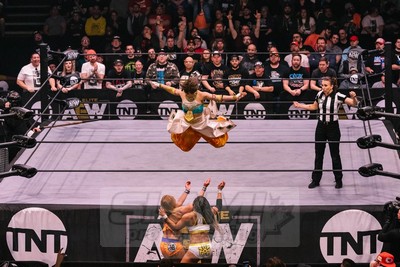 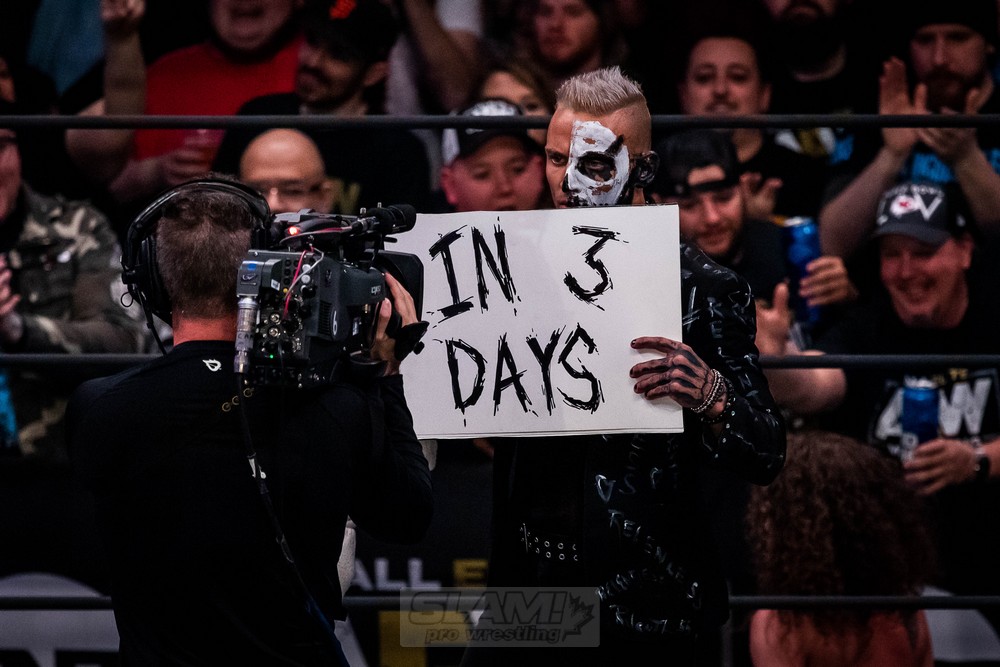 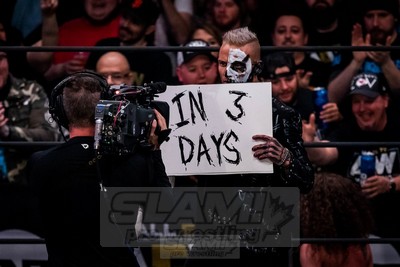 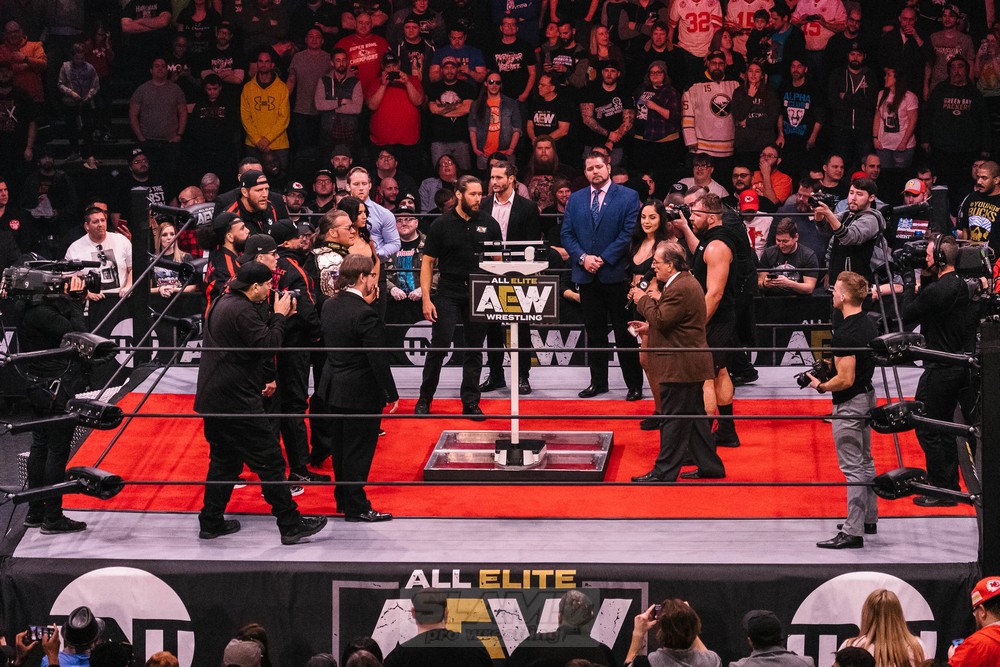 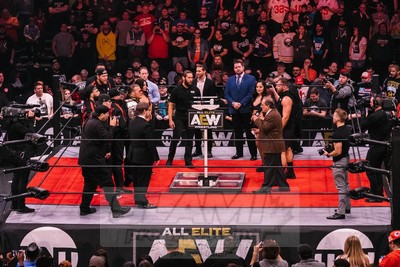 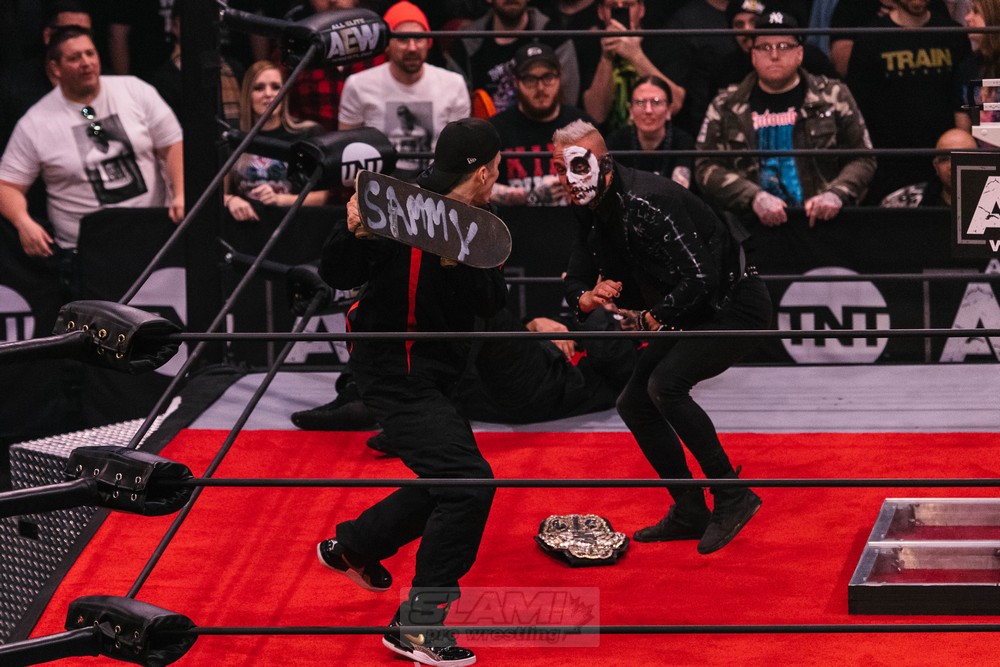 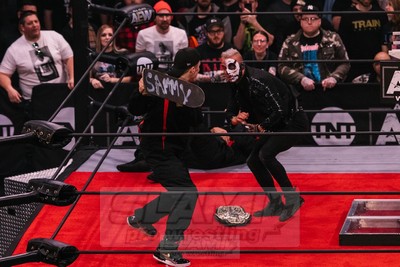