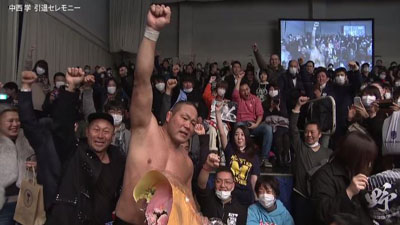 Manabu Nakanishi’s 28 year wrestling career is over. In his final match he teamed with Yuji Nagata, Satoshi Kojima and Hiroyoshi Tenzen to take on Hirooki Goto, Kota Ibushi, Hiroshi Tanahashi and Kazuchika Okada. Nakanishi took every one of his foe’s finishers before finally being pinned by Hiroshi Tanahashi.

In his storied career some of the highlights were him winning the IWGP Heavyweight Championship from Hiroshi Tanahashi in 2009, holding the IWGP Tag Team Championships three times with Yuji Nagata, Satoshi Kojima and Takao Omori. He also won the G1 Climax tournament in 1999 and the Young Lion Cup in 1995.

Once his final match was over, Nakanishi was honoured with a special retirement ceremony. His close friends Tenzen, Kojima and Nagata took their turns saying a few words.

“Are you sure you are quitting before I am?” joked Hiroyoshi Tenzen.

“You never gave up. You always stayed with me. From now on, good luck,” concluded Tenzen handing him a bouquet of flowers as is the tradition in Japan.

Satoshi Kojima was next to speak from his heart.

“I have always tried to follow your example. You are stepping down from the ring and going on to your second life. You will still be a great example to all of us,” he said.

Hiroshi Tanahashi led the rest of the locker room out to say thanks to Nakanishi.

Seiji Sakaguchi (one of the co-founders of NJPW), Hiroshi Hase, Riki Choshu and Tatsumi Fujinami came out to sing Nakanishi’s praises.

“I went from the unbelievable world that was the Olympics to the incredible world that is NJPW and the people who saw me through that were people like Tenzen, Kojima, Nagata and all the other people who came after me who lit me up and carried me along the way. Thank you to everyone I have been involved with over the years,” said Nakanishi addressing the crowd.

“I am a wrestler and I always will be a wrestler. I will die a professional wrestler,” said Nakanishi quoting his mentor Masa Saito.

Bushi and Hiromu pin Yoh with a wheel barrel slam.

Jado hits Honma in the leg with his kendo stick as he climbs up to the top rope. White pins him with Blade Runner.

Naito puts Yoshi-Hashi away with Destino.

Yuji Nagata hugged Nakanishi before the match as the crowd cheered Nakanishi’s name. Nakanishi began the match against Okada. Nakanishi has Tanahashi in the backbreaker and drops him with a Hercules Cutter. Nakanishi suplexed both Goto and Ibushi. Tanahashi was actually booed when he struck Nakanishi with a slingblade. Nakanishi took a GTR, a Kamigoye, a Rainmaker and a High Fly Flow to be pinned.