Graves made the statement not on Twitter but on the After the Bell WWE podcast released today.

“On a personal note, I need to address something. This past Saturday, during the Takeover WarGames event, I sent out a Tweet. It was an unpopular opinion as I often do with the just the intention of stirring up a little controversy, something fun to talk about on TV or here on the show. It was maybe not the most professional way to go about things and it was never meant to offend or disrespect or disparage anybody. That was never my intention. If it was taken as such, I apologize, deeply. That was not my intention. I would never cause anyone any undue stress, especially a co-worker. So, I apologize,” said Graves as he opened the show.

Wrestling fans have reacted to the apology on Twitter.

TK – Jackson (@TRexInAJetPlane) wrote: “#CoreyGraves that apology is bulls–t. “Maybe” it was unprofessional. “If” other people took it as disrespectful. You are clearly not sorry for what you said. If you were, you would’ve at least taken down the original tweet and apologized directly to Mauro.” 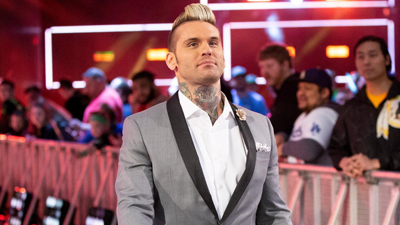 Patrick B (@LoneWolf_3039) stated: “Just started listening to today’s podcast of #afterthebell and Corey Graves did the right thing. Apologized for his comment/tweet during #NXTTakeoverWarGames last weekend.”

Wrestling Nut (@TheWrestlingNut) Tweeted: “So Corey Graves went after Mauro all so he could have content for his crappy podcast. Real nice.”

Jennifer (@JenKasper81) wrote: “…And this isn’t an apology, it’s another “if you were offended” bs faux apology. He’s such a hypocrite and I’m tired of him playing the victim every time he gets called out.”

John Pollock of POST Wrestling has reported that Ranallo will not be travelling to Florida tonight to call this week’s NXT broadcast.

“Just for the record guys, I know you wouldn’t know it, but there’s actually a WWE Hall of Famer AND a former Ring of Honor Champion on commentary. I’d imagine they have a lot to offer,” he wrote.

Graves then began arguing with The Wrestling Observer’s Dave Meltzer and Bryan Alvarez on Twitter when he was called out for not apologizing.

As of press time, Graves’ controversial Tweet has not been deleted.

Ranallo, who is a mental health advocate, has battled depression and anxiety for most of his life. After Graves posted his Tweet, Ranallo deactivated his Twitter account and did not appear on Sunday’s Survivor Series broadcast to work alongside Graves.

In 2017, John “Bradshaw” Layfield left WWE programming to focus on his at-risk youth for his Bermuda-based charity after he publicly criticized Ranallo on his WWE show Bring It To The Table. Ranallo disappeared from WWE television for a time because of the controversy.