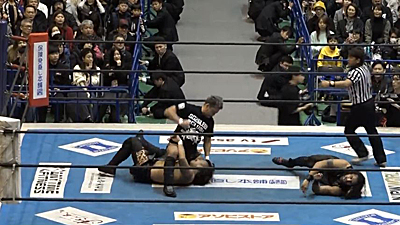 Jeff Cobb and Mikey Nicholls are in second with 10 points while there is a four-way tie for third place.

On Day Eight, FinnJuice, two wrestlers who are having more fun than anyone in the business today, defeated the veteran team of Yuji Nagata and Manabu Nakanishi. Juice Robinson scored another two points for his team with Pulp Friction on Nakanishi.

Tomohiro Ishi and YOSHI-HASHI continued their winning ways by beating Togi Makabe and Tomoaki Honma. YOSHI-HASHI made Honma submit to the Butterfly Lock.

Evil and Sanada moved in with the leaders of the tournament when they defeated Kenta and Yujiro Takahashi. Takahashi was put away with the Magic Killer.

It looks as if NJPW is moving forward a feud between two of their heaviest hitters: Kenta and Hirooki Goto. Kenta distracted Goto so that Tama Tonga could Gun Stun him and the Guerrillas of Destiny could win their match against Goto and Karl Fredericks. As soon as the three count was slapped Kenta attacked Goto punching him over and over again as he laid prone on the mat.

Shingo Takagi and Terrible versus Minoru Suzuki and Lance Archer.

Lance Archer scored the victory with his EVD Claw on Terrible.