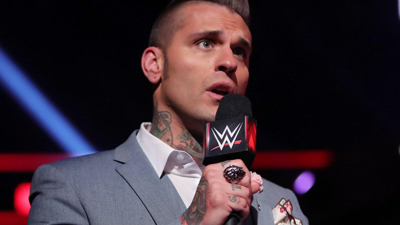 “Just for the record guys, I know you wouldn’t know it, but there’s actually a WWE Hall of Famer AND a former Ring of Honor Champion on commentary. I’d imagine they have a lot to offer,” he wrote.

Following Graves’ criticism, Ranallo, who has been public about his struggle with anxiety and depression and is a mental health advocate, deactivated his Twitter account and was not part of Sunday’s Survivor Series broadcast.

“You uninformed, false narrative pushing liar. My phone works. You’re a ‘journalist,’ right? You can find my number,” Graves wrote on Twitter.

“Now that we’re on day three of this, you could at least apologize to Mauro, show a slight bit of remorse, take down the tweet, all of the above. When you mess someone up on your own team, don’t think only about yourself first, second and last,” was Meltzer’s response to Graves.

Graves followed up with: “My phone isn’t ringing, Dave. More content to continue your rumor-mongering I see.”

Bryan Alvarez, a wrestler and author who also works for the Wrestling Observer entered the fray saying: “I presume Mauro has an unlisted number which is why you had to go after him in public?”

Graves fired back: “Are you the guy that is simultaneously a “wrestler” and a dirt sheet writer, yet doesn’t ACTUALLY grasp how this world works?”

Despite all of this back and forth, Graves still hasn’t deleted the Tweet nor has he addressed it.

It is also not clear if the WWE will take any action and has not issued any public statement on the matter despite Triple H, the Executive Vice President of Talent, Live Events and Creative at WWE, saying recently about WWE employees sounding off on social media: “I don’t understand people airing issues. If you have one talk to us. If you put that out there in the media that’s not a way to go about business. If I had a complaint with a talent I don’t go on Twitter and complain to them, I speak to them. I’ve never understood that process if it’s legit.” Triple also said: “There’s silliness to it, a maturity issue of it’s not how you handle business. Anybody that is out there that is serious about it [gaining their release] that’s talking on the internet, using their phones; you handle your business like a professional. We’re in professional wrestling and the keyword there is professional. That’s what we are trying to change about the business and make people more professional.”

In 2017, John “Bradshaw” Layfield left WWE programming to focus on his at-risk youth for his Bermuda-based charity after he publicly criticized Ranallo on his WWE show Bring It To The Table. Ranallo disappeared from WWE television for a time because of the controversy.