Masks have been a tradition dating back to the early days of wrestling. Used as a means to intimidate foes, masks have played a vital role in many careers especially those in Lucha Libre where the mask is a part of not only that wrestling culture but Mexican culture as well. To celebrate Halloween we have selected our Top 10 Scariest, Creepiest Wrestling Masks. Agree? Disagree? Let us know. 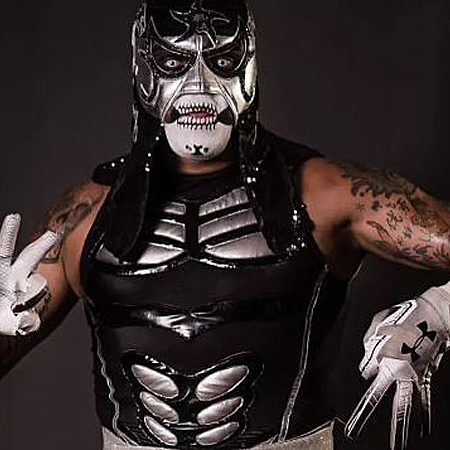 He himself may have “Cero Miedo” but Pentagon Jr.’s mask combined with his face make-up is creepy to say the least, especially those crazy glowing eyes. 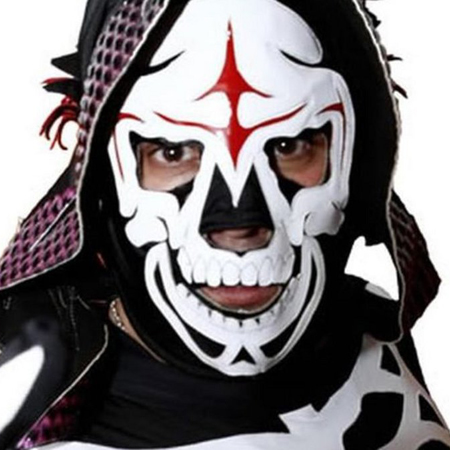 The former “chairman” of WCW may be known for his goofy antics and shenanigans there but that skull mask and hood is unsettling. 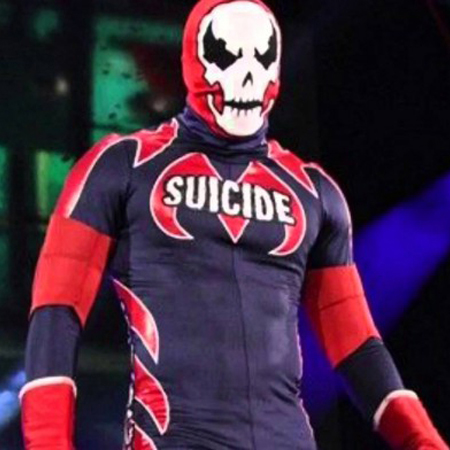 Keeping with the skull theme, Suicide’s mask has always looked like a cross between a skull and Spawn. The fact that you cannot see Suicide’s eyes, that they are blacked out, gives him that phantom vibe for sure. 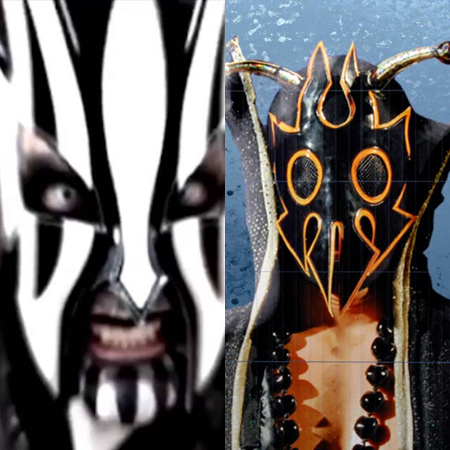 We are lumping these two superstars together simply because their mask-design is so similar. UltraMantis Black is known for his work in Chikara. While his inspiration came from the Japanese Ultraman and Kamen Rider television series, the UltraMantis Black grew into an evil Communist, which is plenty scary to us. Willow was Jeff Hardy’s mysterious alter ego in Impact Wrestling. 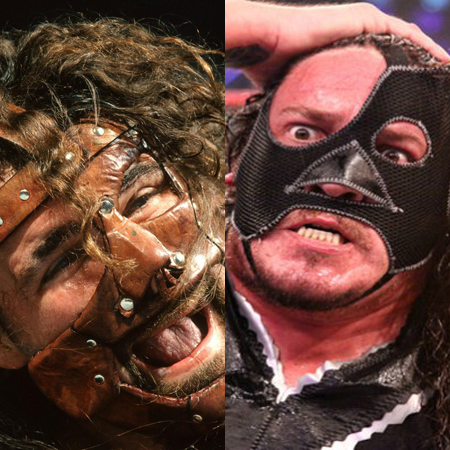 Another gruesome twosome who lifted their mask design from Silence of the Lambs‘ Dr. Hannibal Lecter. Nothing quite says unpredictable threat like a restraint mask from a mental institution. 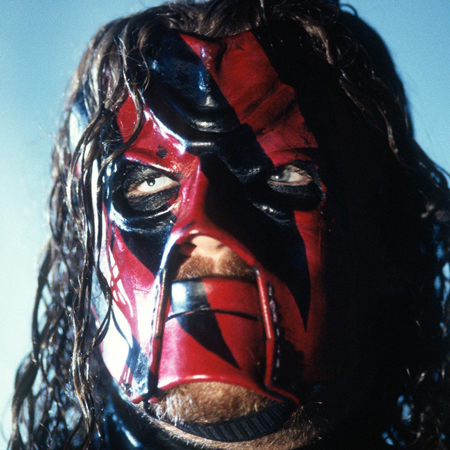 Whether it is his older leather mask or his “Demon Kane” look, Kane has always appeared more fearsome, more threatening with his mask. Otherwise, he is just a kooky bald dude. 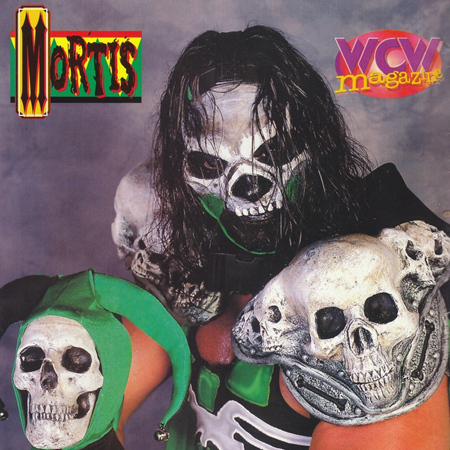 Brought into WCW to be Glacier’s mortal enemy, Mortis not only looked grotesque but he had manager James Vandenberg (James Mitchell) who was just as ghoulish. The talented and underappreciated Chris Kanyon played the Mortis character. RIP, Chris. 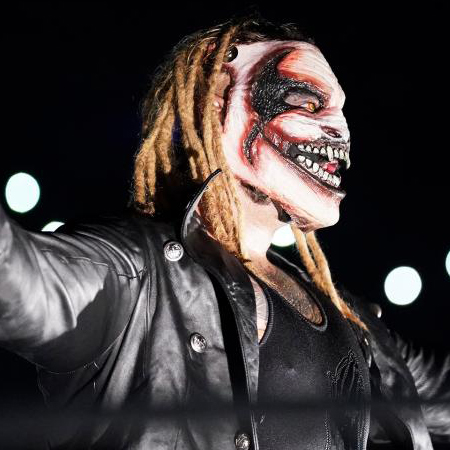 A big part of The Fiend’s popularity is the gruesome mask made by special effects and horror movie icon Tom Savini and his studio. Savini has credited designer Jason Baker with making Wyatt’s mask and that nightmarish lantern he carries. 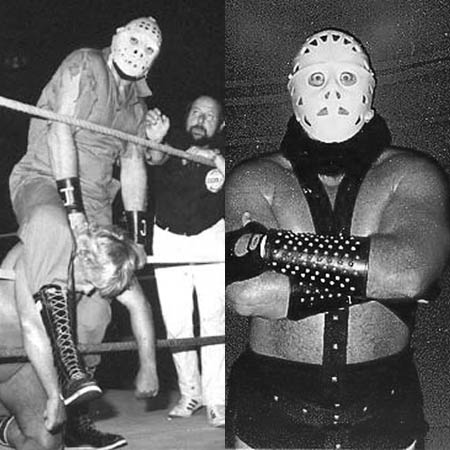 What could be more eerie, more menacing than The Fiend? How about a horrific giant on the other side of the ring wearing a Jason Voorhees-inspired hockey mask? Played by Karl Moffatt in Stampede Wrestling, Jason the Terrible was a mainstay of the Canadian wrestling scene. Lord Humongous, who not only swiped his look from Friday the 13th but also the Mad Max Road Warrior movie, was Mike Stark originally but also played by Jeff Van Kamp, Sid Vicious (Sycho Sid, Sid Justice) and Barry Buchanan and Sid’s son. 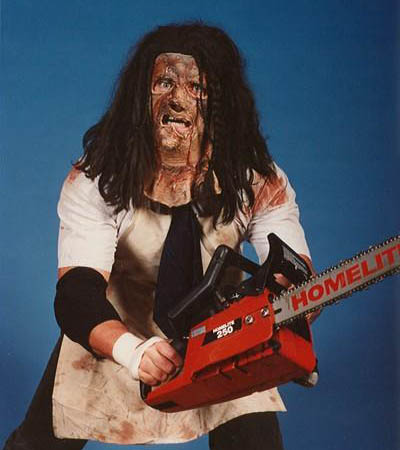 Dude is wearing a dead, rotting human face on his human face. Based on the character in the Texas Chainsaw Massacre film franchise, the crazed Leatherface was played by Michael Penzel, who was also Corporal Kirchner in the WWE. Penzel would breakout in Japan under the mask becoming one of the most savage hardcore wrestlers for W*ING, IWA and Frontier Martial-Arts Wrestling. If you have ever seen one of Japanese death matches you know why he is at the top of our list. Here’s our interview with him on the character: Cpl. Kirchner sets things straight. It should also be mentioned that Canadian Rick Patterson also portrayed Leatherface.