It’s no secret that women have limited rights in the Middle East, particularly in Saudi Arabia, because of the strict application of Islamic law. Consequently, women are restricted from voting or being elected to political office as well as entering the workforce. With all of these factors combined, it’s no surprise to me that women aren’t allowed to participate in some form of entertainment, let alone grapple in the squared circle. However, this is about to change and hopefully for the better.

The WWE has announced that Natalya and Lacey Evans will compete in the first-ever women’s match in Saudi Arabia at Crown Jewel and it’s a step in the right direction not only women around the world but for the company itself. 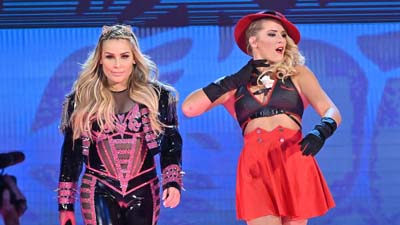 Natalya picked Lacey Evans as her tag team partner for a match against WWE Women’s Tag Team Champions The Kabuki Warriors on a recent episode of Raw. Photo: WWE.

This middle eastern country has come a long way in terms of gender equality but it’s of a more recent event. It was only in 2011 where King Abdullah allowed women to start voting and be appointed into government, which is huge for them. To think that this was only eight years ago seems so daunting to me but then again the culture is very different here in North America.

Gradually, Saudi women began to have a voice and a sense of empowerment. In 2017, women were granted access to healthcare services as well as education. More and more females are enrolling in university and in 2018 the percentage of women in the workforce jumped for the first time in years. It was only in January of this year where they were given the most important right of them all; the control over their lives.

This past August saw a law that passed giving women the right to register for a divorce or a marriage and gave them access to official documents they may need without the permission of a guardian. Before this came into effect, women who divorced their husbands were often left in the dark about what was happening during the separation period, sometimes even leading to homelessness.

It’s encouraging to see that the country is taking steps to support women, just as they did this year at the G20 summit.

After reading that Saudi Arabia participated in an empowerment initiative whose goal was to reduce the gender gap between men and women as well as support them, it makes me proud to be a woman. There’s nothing that gives you more gratifying feeling like women breaking through into a male-dominated world. The women of the WWE know that all too well.

The company suffered a lot of criticism when they decided to host Crown Jewel in the middle east last year, even leading to some of their top talent boycotting the show. Part of those negative reactions was the fact that women were not going to be allowed to participate due to the aforementioned Saudi law. Even with Renee Young being in attendance on commentary it still didn’t seem fair that the women’s division was left out.

As someone who is trying to shine the light on women’s wrestling and its revolution, I was looking forward to the day where these ladies would be allowed to perform in an event that is an important moment in history but also to those who will be sitting in those seats tomorrow.

Women’s wrestling is the embodiment of strength, perseverance and empowerment, something Saudi women don’t get to see and live everyday. When both Natalya and Lacey Evans walk down that ramp, I only wish that all women – especially the young girls – will look at them and see a possibility of what their lives could be.

This is another chance for the WWE to show girls all around the world that they can do anything, even if their rights have been previously confined. There is no better place to demonstrate that tenacity than in a country where women never thought they would get the chance to sit in a seat and watch others break down barriers in a world where they were once overlooked.