‘D-Man’ a Canadian making it in Hollywood 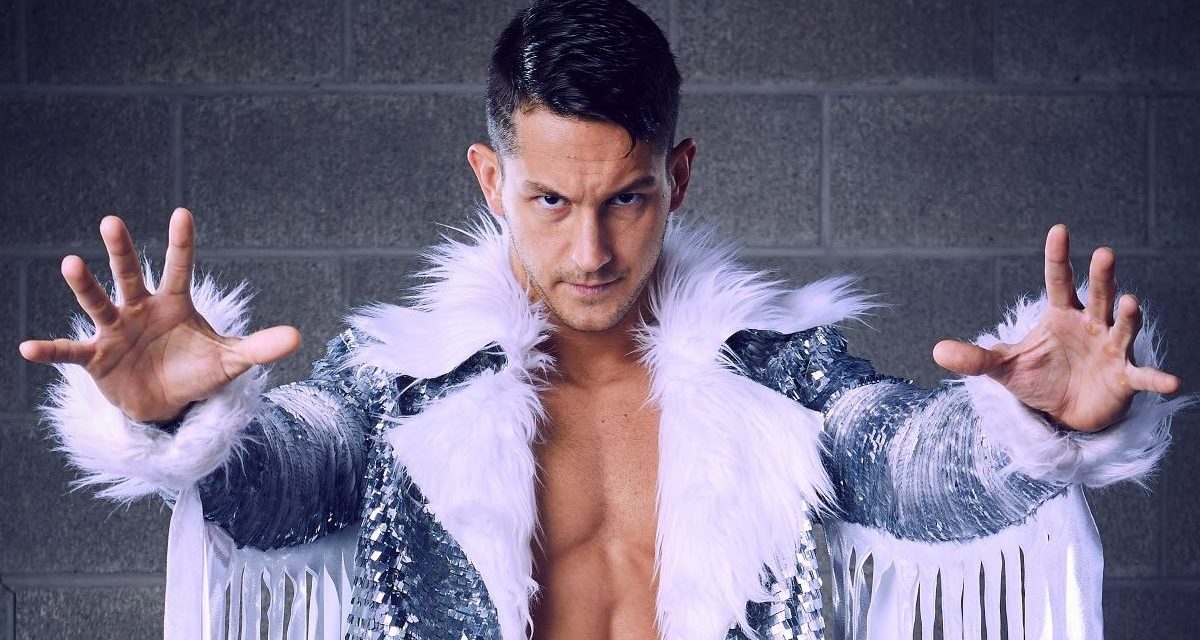 Neither the bright lights of Hollywood nor the glitz and glamour of the spectacle that is professional wrestling could make D-Man forget his roots in Canada or the struggles he faced, working as a bartender and in a plant-based food market in Toronto.

He traveled to America on his own dime for three years to chase the American dream only to be left with nothing in return, except exposure. 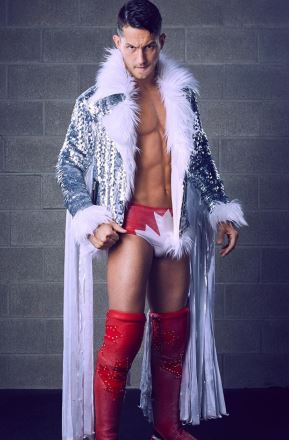 Daniel Iurincic, who wrestles as “D-Man” Daniel Parker, has put in years of hard work. A juxtaposition of cultural and training styles from various trainers throughout Canada has also made him the man he is today.

The 26-year-old Iurincic started training in his tiny hometown of Balm Beach, Ontario, up on Georgian Bay, with local wrestlers Rebel Taylor and Cliff Story when he was in high school. Daniel met Kryss Thorn — a freelancer who wrestles and scouts independent talent in the Niagara Region — through his former trainers and went to university at Brock in St. Catharines, then started training with Thorn at Tri-City Wrestling.

From there, it’s been training and the road.

“I’ve done some training sessions at [Toronto’s] Squared Circle too with Marcus Marquez, Sebastian Suave and [Rob] Fuego,” Iurincic told SLAM! Wrestling, noting other influences. “I also got to travel and learn from Smith Hart very early in my career. My first wrestling road trip I rode with him in the back seat all weekend. Smith was awesome and would always help me out, watching my matches and giving me advice. I even got to work a Stampede Wrestling show — which was on my bucket list — thanks to him and Matt Lund giving me an opportunity. I ended up moving in and living with Anthony Carelli and Yuki Ishikawa a year after Battle Arts [Academy, in Mississauga, Ontario] opened for two years. I trained with Yuki every day, learning the catch as catch style while working at Battle Arts too, before I went to Japan for six months.” 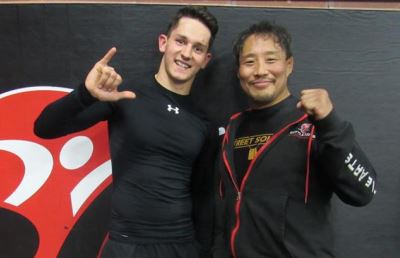 Daniel Iurincic and one of his mentors, Yuki Ishikawa.

Two people who played a pivotal role in preparing him for the bigger stage of Hollywood are Hustler Rip Rogers and Anthony Carelli, formerly known as Santino Marella.

“I was living with Anthony and I’d get to talk to him all night long. We’d watch footage,” D-Man said. “He stayed up all night with me then and did the same seminar he did with me one-on-one with the rest of the participants.” When he is in town, Iurincic is a trainer at Battle Arts. 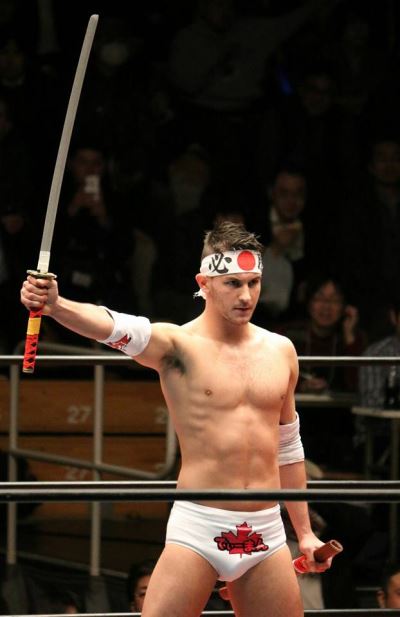 Weilding a katana in Japan.

Part hybrid-wrestler, part luchador, D-Man has also wrestled under the moniker of The Last Samurai and The Matrix for the Japanese Zero-One promotion. D-Man, slim and tall, at 6-foot, and weighing in around 165 pounds, delivers lightning-fast kicks that are as sharp and swift as a sword-yielding samurai.

The hardest thing of being an independent wrestler, he said, was struggling with money, and not always getting what was promised by a promoter. “My family and friends would sometimes help me if I needed it financially.”

Iurincic needed exposure so he turned to the syndicated show Championship Wrestling from Hollywood, with its TV deals across the United States.

Championship Wrestling from Hollywood (CWFH) has its origins in the NWA, noted promoter David Marquez. “[It] started as a second brand out of the NJPW-USA Dojo in Santa Monica, CA in 2003 as ‘NWA Pro Wrestling,’ then in 2009 with television on the horizon I changed the name to ‘NWA Hollywood.’ I broke away from the NWA in 2012 the official name has been CWFH.”

Under the new NWA stewardship of Billy Corgan and Dave Lagana, the NWA World champion has been known to show up on the TV show. D-Man even battled then-champion Tim Storm, losing in December 2018 during the “Milestone” special.

In Canada, CWFH can be found online at FITE and Global Wrestling Network or on television on Fight Network (See hollywoodwrestling.com for more).

Since he is a Canadian on U.S. TV, there’s a perceived stereotype to take advantage of or play into. “Doing television in America with Hollywood Championship Wrestling, I’m pro-Canadian. But I’m not the stereotypical nice Canadian,” Iurincic said. “I’m the exact opposite. My catch phrase is, ‘Sorry.’ I end all my promos with ‘sorry,’ saying it in the most arrogant, cocky, sarcastic jerk way I can.”

He went on further to describe the character that he plays, which includes red and white gear with a maple leaf. “D-Man loves Canada. He’s not good. He’s not American, certainly not Mexican. He’s Canadian. And that means he was born great. That’s why he is the greatest and he won’t let you forget when he’s out there.” 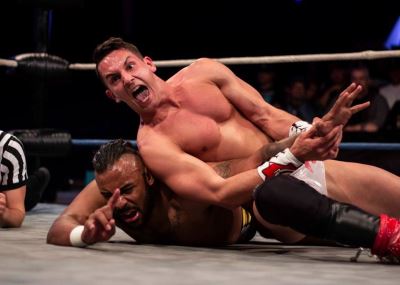 D-Man holds onto his cultural identity while projecting a prideful, young Bizarro Canadian whose self-image is emphasized by Hollywood’s bright lights and grandeur.

Chasing the American dream has never been easy, especially in the postmodern age, even with an exhaustive, relentless amount of preparation and good manners. Wrestling for Championship Wrestling From Hollywood, which is broadcast on more than 240 American television stations, has left this starving artist yearning and hungry for more.

“My time in California really [involved me] nitpicking television style wrestling. My film and television background and schooling helped make it easy for me to already think that way, finding out the fine details like timing out and writing out a show for TV. I also live with the editors and production crew, so I’ve been able to learn directly from everyone there in every aspect of company roles over the last three years.”

Marquez is a fan of both Iurincic’s understanding of the wrestling on TV medium and his work ethic. “Dan is a solid performer. At his age he is rare. He understands performing and what I mean by that is he knows the audience,” said Marquez. “He’s aware of the importance of entertaining the people in the stands and the people watching on television at the same time. This is not easy, especially in today’s pro wrestling.”

CWFH is not D-Man’s only TV experience. In Toronto, Victory Commonwealth Wrestling provided exposure and television experience on the local Rogers TV outlet. He is fully aware, though, that “reality is in America” and it’s the place he wants to continue and pursue his career.

Wrestling in Japan, where he spent six months, also left a lasting impression on Iurincic. The Zero-One head office asked him to bring a skateboard for a ring-entrance, to cruise to the ring and attract a younger audience for the baby-face. His youth, and vitality shine through, along with his willingness to learn. With an open mind, D-Man also learned from Zero-One leader, Shinjiro Otani.

Recently, Iurincic was backstage for the WWE Raw and Smackdown shows in Montreal, and practiced with WWE superstars during rehearsals, including Lars Sullivan, Triple H, and Kurt Angle. He received feedback from Pat Patterson, who put him over, complimenting his ring gear.

If he has his way, plenty more people will see D-Man’s ring gear.