If a wrestling match happens, and no one photographed it, did it really happen? The answer should be pretty evident given the outpouring of love and appreciation for Lyle C. Williams, the long-time Philadelphia-area photographer who died on Monday, June 2, at the age of 57 from bone cancer.

“Wrestling lost a huge fan today. I hadn’t seen Lyle Williams in many years but I still remember his kindness and enthusiasm for this industry,” wrote WWE star Kevin Owens on his Twitter account, @FightOwensFight, posting a photo of the two of them together. “He took a lot of pride in capturing moments from every show he could make it to and sharing them with everyone. He will be missed.” Others who noted Williams’ passing include Ethan Page, Kassius Ohno (Chris Hero), Dasher Hatfield, Su Yung, LuFisto, Kimber Lee, and Sumie Sakai. 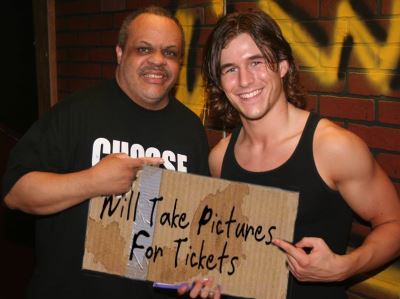 CHIKARA veteran Jigsaw noted that Williams was more than just a photographer at ringside, but also someone who’s advice mattered. “Lyle C. Williams was a massive part of my early pro wrestling upbringing. I hope he knew how much it meant to me when he would say ‘Great Match!'” Jigsaw posted to his Twitter account, @JigsawWRESTLING. “He watched so many matches, so to say that meant the world to me. He was an absolute legend. Rest easy my friend.”

Williams is most associated with the violent Combat Zone Wrestling (CZW) promotion in Philly, though he shot countless shows for countless promotions.

“Lyle wasn’t just a photographer. He was family,” was the note posted to the CZW Facebook page. “He was one of the most genuine and nice people we’ve ever had and everyone who’s ever stepped foot in the combat zone would be the first to tell you that. He was always a shining spot in what would be a long and arduous day. It was an absolute privilege and an honor for him to be part of our family for such long time. Combat Zone Wrestling is planning in doing a tribute for Lyle after speaking with his family. We love you Lyle. You will he missed.”

CZW’s owner, David John Markland (wrestler DJ Hyde), echoed the CZW post. “Lyle is family to me & CZW & all of wrestling. He loved us and we loved him. Always wanted to help everyone. We will be doing something for him and his family. Words can not explain what Lyle means to us. Lyle, love you buddy.”

George Tahinos, a SLAM! Wrestling photographer for many years now, knew Williams when they both would shoot CZW. “Good guy, was well liked by everyone. I would see him every once in a while down in Philly at Icons conventions or House of Hardcore,” wrote Tahinos in an email. “He would always complain about his knees, I would tell him my knees are bad too and just pop a few Advil before shooting.

“Probably one of the last times I saw him wasn’t at a wrestling show but at the Burger King in Jersey right before I headed over the Walt Whitman Bridge to go to a WWE show for SLAM! Wrestling. I would normally stop there before going into Philly. I was sitting there eating and he walked in. He was surprised to see me there and we talked for a few minutes.”

Another area photographer, Scott Finkelstein, posted about Williams too: “No more beautiful a soul has ever walked this earth than Lyle C. Williams. A devoted son, avid fan and good natured friend. I’m jealous for the talent you’ll be shooting in heaven. I’ll miss you deeply sir.”

Evan Ginzburg, the long-time fan, writer and an associate producer on both The Wrestler and the 350 Days documentary, knew Williams. “I can count on MAYBE two hands people in the wrestling business that nobody has a bad word to say about. Noted photographer and all around wrestling supporter Lyle C. Williams is one such person.”

Lyle Williams is survived by his mother, Helen Williams. The funeral will be at Pitman Road Church of Christ, 500 Pitman Rd., in Sewell, NJ, at 11 a.m., on Saturday, June 8, with a viewing beginning two hours prior.