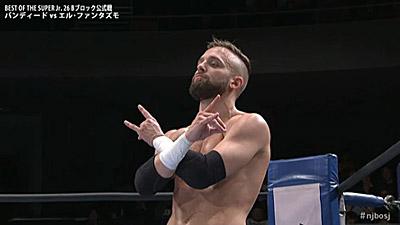 Vancouver native El Phantasmo has begun the Best of the Super Jr. tournament with a big win over Bandido.

The match was fast and furious with Phantasmo displaying his knowledge of international sign language by flipping a familiar gesture to Bandido at the start of the match.

“What are you going to do, Bandido? Shoot me in the head with your fake gun, bitch?” said Phantasmo snapping Bandido’s fingers, bringing him down to the mat.

With no barriers to protect the crowd, Phantasmo hit Bandido with a suicide dive knocking him into the first three rows.

At the end of the match, Bandido kicked out of a Super Hurricanrana from the top rope and a splash. Phantasmo pulled Red Shoes into Bandido’s way, yanked his mask up to expose Bandido’s face and put him away with a Modified Facebuster.

“One down, eight to go, baby!” declared Phantasmo as he left the ring victorious.

Taichi was Douki’s corner man. Narita puts up a good fight but he is no match for Douki. Douki pins him with Suplex de La Luna. Douki gets into it with Jyshin Thunder Liger at the announce desk.

Eagles targets Romero’s knee. He 450 splashes it and makes him submit.

Will Ospreay Versus Bushi

Ospreay pocketed two points with a Storm Breaker on Bushi.

The veteran was just too much for Yoh to handle although he did kick out of Dodon. Taguchi would eventually pin him with Dodon to the Throne.

Juice Robinson and Dragon Lee beat Shota Umino and Sho. Umino submitted to Robinson’s crab. Lee and Sho brawled out into the crowd.