Best of the Super Jrs. Night Three: The champ gets on the board 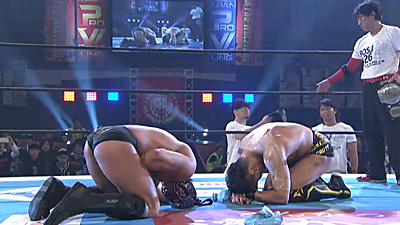 The IWGP Junior Heavyweight Champion has notched a win.

Dragon Lee scored a victory against Sho, one half of the IWGP Junior Heavyweight Tag Team Champions, tonight in the latest round of the Super Jr. tournament.

Lee, the brother of Rush, lost to the former champion Taiji Ishimori on Night One.

If he is still the champion at the end of the tournament, Lee will defend the belt against the winner of the Best of the Super Juniors.

Dragon Lee had a hard time putting away Sho who just wouldn’t quit. A resilient Sho kicked out of a powerbomb, two successive knee strikes but fell to a Desnucadora (Vertical suplex powerbomb).

It is a battle of Bullet Club and former Buller Club members. After a hard-fought battle, Ishimori pins Scurll with Bloody Cross.

It is Titan’s amazing speed against Shingo’s incredible strength. Shingo eventually wears down Titan. Shingo’s Last of the Dragon earns him another two points.

Kanemaru directs his attacks on Tiger Mask’s injured knee, wrapping it around a steel post, stomping on it. Tiger Mask survives all of the attacks, including a figure four, to win the match with a cradle. Kanemaru tears off Tiger Mask’s mask throwing it into the crowd.

Taka taps out to Gresham’s Octopus Hold. Gresham chalks up his first win in the tournament.

Jado and Robbie Eagles beat Yuya Uemura and Ren Narita. Eagles gets the win with his Turbo Backpack finisher.

Taichi and Douki defeated Shota Umino and Ryusake Taguchi. Taichi makes Umino submit to the Stretch Plumb. Douki and Taguchi trade blows. Taichi nails Taguchi from behind. Douki hits Taguchi in the face and throat with his steel pipe.

Juice Robinson, Bandido and Will Ospreay defeated Toa Henare, Yoh and Rocky Romero. Robinson gets the three count with the Left Hand of God and Pulp Friction. The mysterious video played once again taunting Robinson.