Best of the Super Jrs. Night One: 2018 finalist starts with an impressive win 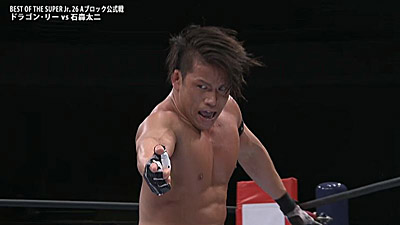 The annual and historic Best of the Super Jr. tournament began with one of last year’s finalists defeating the current IWGP Junior Heavyweight Champion. As the tournament got underway with Block A action, Taiji Ishimori, who wrestled but lost in the finals last year against Hiromu Takahashi, started the tournament with a win against Dragon Lee. Ishimori ended the amazing bout by pinning Lee with the Bloody Cross finisher.

Tiger Mask was bested by Taka Michinoku throughout the entire match. He pulled off a surprise win though with a Tiger Bomb and a Tiger Suplex stunning Michinoku. Tiger Mask needed some ice on his injured knee. The announcers speculated about how long he could push through the tournament with such an injury.

It is non-stop Kanemaru. Kanemaru went right after Titan’s mask, shoving the official away. Titan is DDTed on the floor. He almost fails to get back into the ring. Titan kicks out of Deep Impact. Titan avoids Kanemaru’s whiskey spray, pinning him with his Titanics finisher.

Brody King is at ringside for Scurll but never interferes. He just stands there like a statue. Scurll takes control after snapping Gresham’s fingers. A clothesline that takes Gresham out of his boots and a Black Plague scores Scurll the win.

Sho comes out with a video game inspired entrance and a new theme. One of the announcers calls Shingo Takagi the “Dark Souls” of the tournament. Shingo punches the holy heck out of Sho, stuns him with a head butt and almost puts him away with the Pumping Bomber. Last of the Dragon for the three count.

Taichi and Douki defeated Yota Tsuji and Ren Narita. The announcers clue us into the fact that Taichi trained Douki and is responsible for bringing him to New Japan. Douki, who looks like something out of Mortal Kombat, gets the win for his team. Ren Narita blindsides Douki after the bell. Taichi beats the tar out of Narita.

Bullet Club (Jado, Robbie Eagles and El Phantasmo) defeat Yuya Uemura, Rocky Romero and Bandido. Robbie Eagles pinned Uemura. As Eagles sits on the apron facing the crowd Romero kicks him in the back knocking him onto the floor.

Juice Robinson and Ryusuke Taguchi defeated Shota Umino and Yoh. Umino submitted to Robinson. A video played showing a mysterious figure in a bar flipping over a small hour glass and carrying a knife. The stranger’s jacket had a Union Jack on it. The figure proceeded to carve an hour glass into the bar with said knife. The words “Time’s Up” appeared with the date 2019-6-5.