Beverly Shade’s a Hall of Fame wife too 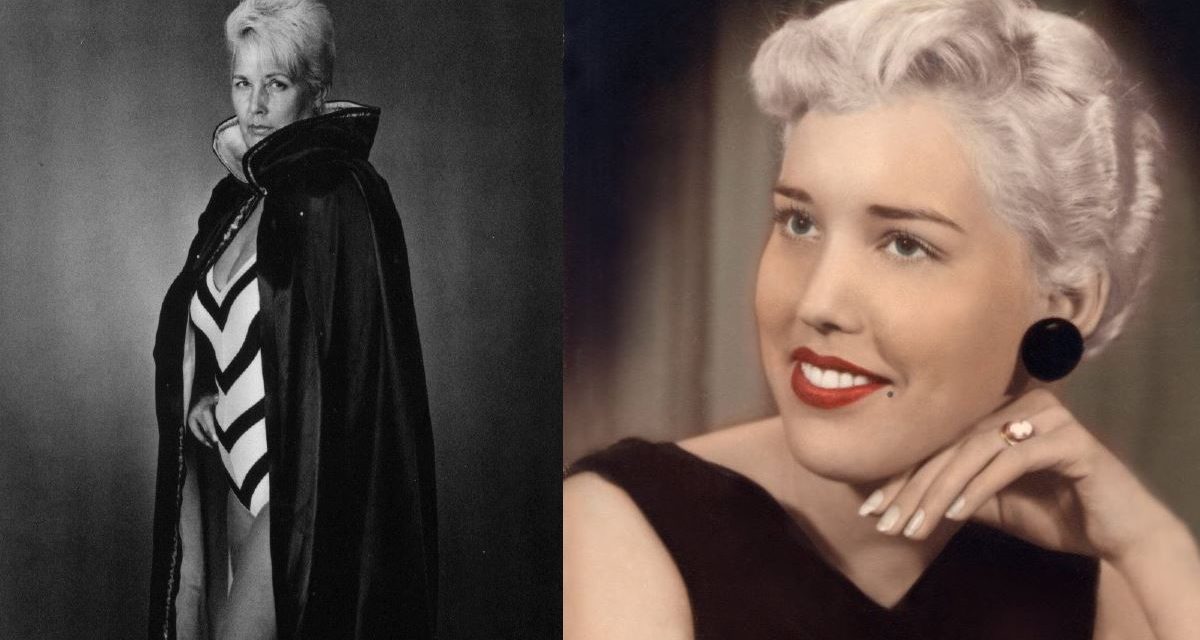 This coming weekend, Beverly “The Hammer” Shade will be inducted into the Pro Wrestling Hall of Fame in Wichita Falls, Texas. I am so excited for her. You see, I’m her husband, and we’ve been together since 1968, when we first met at a wrestling show at Joyland in St. Petersburg, Florida. She was actually retired at the time, and I not only convinced her of my own merits, but also to return to action.

We not only lived and wrestled together, but we promoted wrestling matches against the established Eddie Graham, who was affiliated with the NWA office. We were outlaws, in the terminology of the time. We worked as Billy and Beverly Blue River. Behind the scenes, she handled the booking and a lot of the management of the promotion.

As the crowds began to grow at our Joyland shows, Graham forced some of his wrestlers to attend the matches and cause a disruption. Not one to sit idly by, Beverly had them escorted out by the Bay Area Security. Things began to worsen as Beverly asked former NWA champion Ella Waldek to wrestle for us, followed by one of Graham’s top wrestlers, Ray Villmer. Crowds increased so much that there was no more room in the facility’s large parking lot. The Sheriff Department had to stop people from parking on US 19.

Graham called Beverly and told her if we promoted another show she would find her husband — me! — in a ditch with his head cut off. Her reply? “If this happens, I will blow your Sportatorium sky high” … and then she hung up. 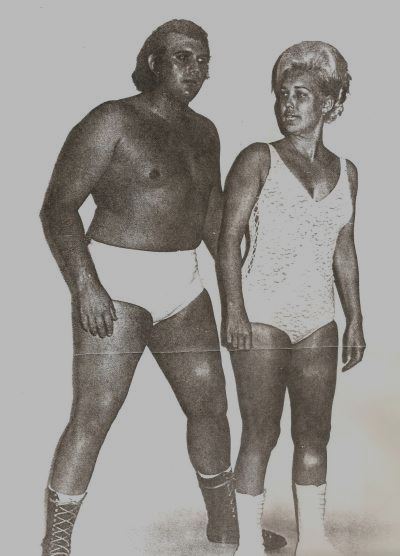 After the following show, it was my mother who got a nasty call from Graham, who told her that he planned to blow up their house. Naturally, my mom was scared to death — and we were furious, as was my dad, who was an old-time shoot wrestler, who knew how to break bones.

Days later, I was the one who was kidnapped, by Eddie Graham, Hiro Matsuda and Duke Keomuka — none of them are alive anymore to give their side, but it happened; ask Bob Roop, who’s in the same 2019 PWHF Class as Bev. They would not let me go until Bev and I stopped promoting; naturally, to get out of there, I agreed.

My wife had other ideas.

She showed my dad how to construct a wrestling ring, and armed with a number of new rings, the next thing I knew, we had 14 towns to promote all over Florida.

There were no more words or threats from the Tampa office, Eddie Graham having died in early 1985. 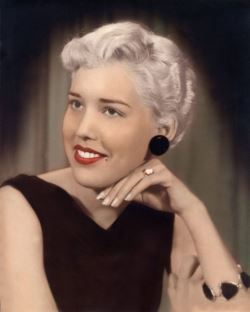 All through this drama, I had a job with Joseph Schlitz, Can Division, and I was offered a huge promotion to become Quality Assurance Manager with the Reynolds Aluminum Company, for both a better salary and better benefits.

We talked about it, and while Beverly did not like the idea of moving, we did, as she was assured of schooling to become a customer service technician. The choice became obvious and we were to relocate within 30 days.

But first, Beverly said she wanted to run an all-women’s show in Tampa. She called it LAW — Ladies All-star Wrestling — and the show featured the WWF Women’s champion the Fabulous Moolah against the NWA Women’s champion Misty Blue, along with Malia Hosaka, Candy Devine, Princess Jasmine, Winona Littleheart, and a battle royal. She hired ABC to film it and Buddy Colt as the TV announcer, with dreams of television syndication.

It was a full house, and the end.

As the show concluded, Ray Charles’ “America The Beautiful” played, and Bev and I hugged, knowing this was the end of our wrestling career. She was 52 years old, making it quite the run.

She was a wrestling fan from an early age, and young Bev became convinced she could do it too when she saw women’s wrestling on the television. After graduating from high school, she went right up to NWA President Sam Muchnick and told him she wanted to wrestle. She “pestered” him until he gave in and introduced her to established women’s star June Byers. 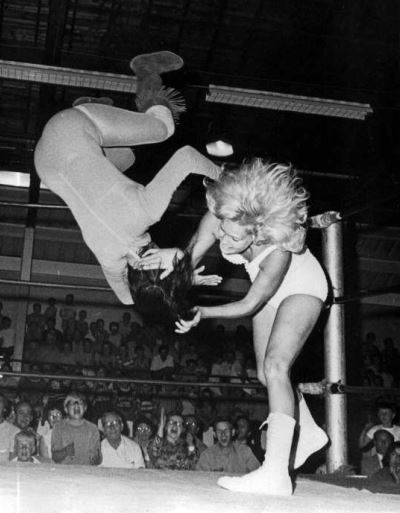 Beverly Shade in action in 1971 at the Newmarket Arena in Newmarket, Ontario.

Byers tried to dissuade Shade, but she was persistent and was all set up to be sent to Billy Wolfe’s school in Columbus, Ohio, before Muchnick changed his mind and sent her to Cowboy Luttrell in Florida instead. Her first match, in 1957, was a five-way elimination match. It was a test, and Luttrell asked her if she still wanted to learn to wrestle. Though she was struggling to breathe from her first match, nevertheless she persisted.

What made Beverly Shade unique, and a feather in her cap as she enters the Pro Wrestling Hall of Fame, is that for most of her career, she was independent of the Fabulous Moolah’s operation, primarily working for southern promotions under the control of Nick Gulas.

Her only real work with Moolah came in 1979, when she was recruited for a tour of Japan, and 1980, when she did a four-week tour in the Northeast territories. Bev was smart, and had no interest in signing off her money to Moolah, saying that she and Moolah got along, but she was never obligated to her. Bev was on the WWWF’s August 9, 1980 “Showdown at Shea” show at Shea Stadium, the one headlined by Bruno Sammartino against Larry Zbyszko, teaming with Moolah against Kandi Malloy & Peggy Lee. 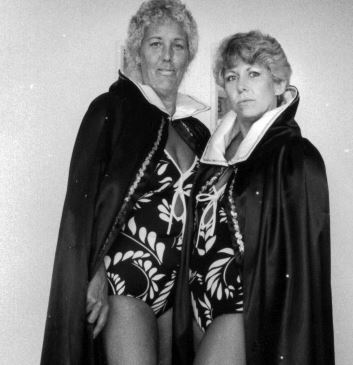 Beverly Shade and Tracey Richards were the Arm and Hammer Connection.

Shade trained new wrestlers as well, and in 1983 she and her trainee Tracey Richards formed a tag team called the Arm and Hammer Connection. Shade’s new signature move, a double axe handle from the top rope dubbed “The Hammer,” led to her new nickname as well.

During her career, Bev got to far more countries than I ever did, working throughout the United States and Canada, as well as Thailand, Trinidad, Nigeria, Japan, and Puerto Rico.

Working for McKigney in Ontario in the summers of 1970, 1971, and 1972, were memorable for Bev, and she made some lifelong friends, like Rachael Dubois and Ron Doner, and has travelled up to Toronto to the Titans in Toronto dinners — fundraisers for the PWHF — to visit and support the worthy cause. Equally memorable was an unintended cut from Carmen Monge who hit her with a wrench, meaning Bev received 36 stitches in her head. Another injury was a hurt knee in Puerto Rico while working for Carlos Colon.

Summing up my wife’s career like this is all well and good, and proves she’s a legitimate Hall of Famer. 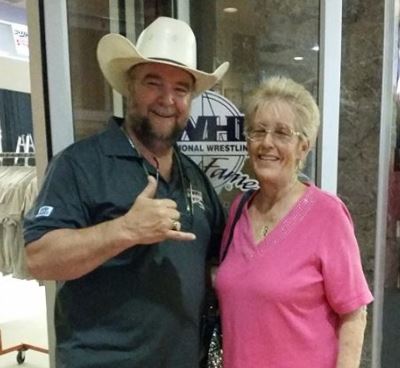 Cowboy Johnny Mantell and Beverly Shade at the Pro Wrestling Hall of Fame.

But what really makes her stand out for me is how she has stood strong by my side, whether it was facing down Eddie Graham and his goons, or in more recent years, as I’ve taken ill and couldn’t do much. It kills me that I can’t be there in Wichita Falls as she is inducted into the Pro Wrestling Hall of Fame, but such is my lot in life.

I love you, Bev. Thanks for everything. Go get your PWHF ring and cowboy hat! I can’t wait to try them on myself when you get home. 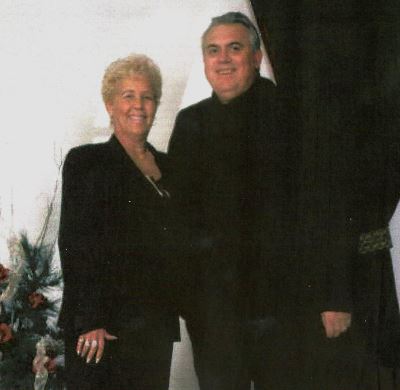 Billy Wenhold is the husband of Beverly Shade, and wrestled as Billy Blue River.