Guest column: My film ‘Out In The Ring’ focuses on wrestling’s LGBTQ ties

By RY LEVEY – For SLAM! Wrestling

I’ll always remember my first interaction with wrestling being circa 1985, as a young man growing up in Edmonton, Alberta. My parents were out shopping and I was flipping channels post-Saturday morning cartoons, as I stopped on a program. I recall seeing myriad unique stars, ones far away from the World of Hulk Hogan and the WWF. Stars like Rick Patterson, “Champagne” Gerry Morrow, Mike Shaw, Ron Starr, The Cuban Assassin, Ben Bassarab, Bruce Hart, etc. It excited me in ways I had never experienced. It drew me to buying and collecting magazines, saving my hard earned allowance to go every two weeks to see shows at the Northlands Agricom, and discover any wrestling I could.

It’s now 30-plus years later, and my love of wrestling is probably greater than ever. Everything about it has always fascinated me; the characters, the pageantry, the costumes, the theatre. I was too young in the 1980s to fully understand the other elements of it that would become part of my interest — the sexy elements.

Wrestling is undeniably a sexually charged presentation. How could it not be? Spandex tights and shirtless men, or form-fitting outfits on the bodies of women. As a young man coming to terms with his own sexuality, the often dubious representations of gay men in wrestling, the homophobic language and aggression presented in promos, in matches, and by fans, coupled with a not full grasp of my attraction to the action caused great confusion and discomfort. 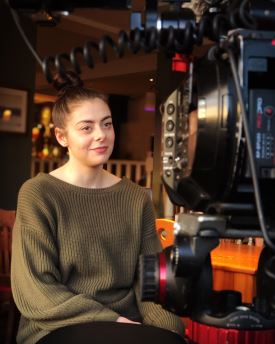 Wrestling always felt like an industry that I would not be welcome in. It would only be years later, having fully accepted who I was, entrenched in activism and working within the film industry promoting queer cinema, writing, and ultimately making my own documentary films, that I would begin a years-long journey; a journey that ultimately led to my exploration of the history of LGBTQ representation in professional wrestling, culminating in my currently in production feature documentary, Out In The Ring.

Looking back from our current vantage point in late 2018, professional wrestling has always had a connection to the LGBTQ community. The obvious character being the legendary persona of Gorgeous George, primping and preening, the perfume, the curls, etc. Looking further, and better understanding history, we now know that LGBTQ performers and executives were always a part of the business. One of these individuals was the openly gay wrestling promoter Jim Barnett, one of the most powerful figures in the field, and vital to the industry’s foundation.

While Barnett was out, there were many that were not so open. Legends like Pat Patterson, well-known within the industry as a gay man, who maintained a long term relationship with his partner that began in the 1960s while outwardly portraying a ladies man character. In one particularly amusing interview, he referred to himself as having lots of girlfriends and being an animal with the ladies. Other performers, like women’s wrestling legends Susan Green and Sandy Parker, also kept their lives a secret for years from fans, only in the last decades sharing their stories in podcasts, article, and in the case of Patterson, in the form of his outstanding biography, Accepted.

This lack of social acceptance and understanding would stay the course for decades. Promoters regularly practiced cultural appropriation of LGBTQ tradition, from beefcake pictorials and leather, Tom of Finland, films like Cruising, and drag culture. Characters like Adrian Street, Adrian Adonis and Rip Rogers in the ’80s, the ’90s androgyny of Goldust, and early 2000s debacles like Billy and Chuck and Hot Lesbian Action were steeped in LGBTQ imagery, both positive and negative. 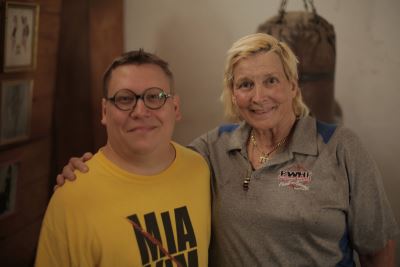 But alongside all of this was the beginning of a silent revolution. Behind the scenes, people like the iconic Pat Patterson in WWE, and even legendary gay musician Bob Mould of the band Husker Du, while writing for WCW, attempted to change the course. You can now see the tide turning in the 2000s, with late wrestler Chris Kanyon coming out, and the increased presence of the internet, allowing for members of the LGBTQ community to begin sharing their stories. Independent wrestlers like Simon Sermon sharing his story on YouTube, to indie stalwart Scott “Sgt. Dickson” McEwan openly in photo shoots in LGBTQ newspapers and actively working in the ring, unabashedly open.

All of this preceded the coming out of superstar Darren Young (a.k.a. Fred Rosser), who publicly stepped out and would become the first active roster WWE superstar and championship holder. All of this history brings us today to a world where we see a plethora of amazing out talents. The WWE has the first out active roster woman in Sonya Deville, and other leading promotions highlighting performers, with Lucha Underground featuring Sonny Kiss as XO Lishus, the gargantuan Mike Parrow making waves in All Japan and MLW, women’s stars like Kaitlin Diemond and Charlie Morgan making debuts for Ring of Honor and NXT UK respectively, and this is just the beginning. We now have LGBTQ wrestling promotions like A Matter of Pride, WWE superstar allies like Finn Balor using his profile to highlight acceptance of the community, and out transgender stars like Lola Starr, Candy Lee, and Nyla Rose currently competing around the world.

It has been a very long journey, one peppered with a combination of bravery, shame, tragedy, hope, love, hatred, and acceptance. All of these things are part of a rich history that brings us to an exciting and hopeful time for LGBTQ performers. It is important to have these individuals as a visible part of the wrestling world. It is important to see them, hear their stories, and accept them. This visibility is key to making sure that we never have another young person feel like they are not welcome, like myself and many others felt for so long, not just as wrestlers but as fans too. If my film Out In The Ring can be an extra part of this, then it will all be worth it.

Ryan Bruce Levey is the director and producer of the upcoming documentary Out In The Ring.