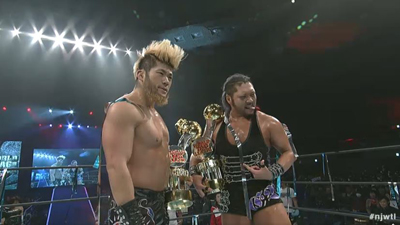 Los Ingobernables de Japon (Evil and Sanada) have won World Tag League 18 but that isn’t the only big news out of the event. Kota Ibushi also defeated Hirooki Goto to become the new the NEVER Openweight Championship and will face Will Ospreay at Wrestle Kingdom for what could be a show-stealing bout.

To win the tournament, Evil and Sanada were able to avoid the Magic Killer. Tama Tonga knocked Evil off the canvass so the Guerrillas of Destiny could isolate Sanada. Sanada used his strength to put the brakes on Tonga’s Gun Stun. He rolled up Tonga for a two count. Tonga kicked out sending Sanada into the ropes and into Jado’s awaiting kendo stick. Sanada kicked out of Tonga’s pinfall attempt.

Just in the nick of time, Evil saved Sanada from being pinned with the Magic Killer. Evil fought off the Guerrillas as best he could but eventually the numbers game caught up with him and he was speared to the mat by Loa.

Sanada countered the Super Powerbomb as Evil took care of Tonga. Tonga kicked out of a Magic Killer which sent Sanada into the official, Red Shoes. As Jado snuck into the ring, Evil ripped the kendo stick out of his hands. A Magic Killer took Jado out of the equation. Sanada reversed a Tongan Twist into a Skull End. Loa saved Tonga.

Evil hit Loa with Everything is Evil. Evil powered his way out of Tonga’s Gun Stun lifting him up for the Magic Killer. Tonga kicked out of Sanada’s pin. A ticked off Evil planted Tonga with Darkness Falls. Sanada pinned Tonga with a Moonsault from the top rope to win the tournament for the second year in a row.

After the match, Sanada and Evil laid down the challenge for IWGP Tag Team Championship as the Young Bucks entered the ring.

Matt Jackson declared that Evil, Sanada may be the best team of the tournament but the Young Bucks are the best in the world.

“So, my suggestion is this, when we lost those championship belts we never got a rematch. I think Young Bucks are the next challengers for the IWGP Tag Team Championship,” said Matt throwing down the microphone with Kevin Kelly insisting that the Young Bucks are trying to skip ahead in the line for a title shot as the winners of World Tag League always get that title match at Wrestle Kingdom.

Another match was set up for Wrestle Kingdom earlier in the show when Kota Ibushi beat Hirooki Goto for the new the NEVER Openweight Championship. Ibushi went toe-to-toe with powerhouse Goto using his speed and agility to gain the edge throughout the match. Ibushi almost knocked himself head butting Goto in the back of the head. As Goto held both of Ibushi’s arms, he laid in some head butts of his own. Ibushi countered one with a knee strike and a Kamigoye sealed the win making Ibushi the new NEVER Openweight Championship.

While Goto was led away, Will Ospreay, who had beaten Taichi to become the number one contender to the NEVER Openweight Championship earlier, grabbed a microphone and came into the ring.

“Ibushi, I have been waiting for this moment for a long time. They are calling it the Dream Match. Ospreay versus Ibushi. I cannot think of a better place for this Dream Match than the stage of dreams. Ibushi, I challenge you for the NEVER Openweight Championship at Wrestle Kingdom 13,” said Ospreay.

Suzuki-gun (Davey Boy Smith Jr., Lance Archer, Minoru Suzuki and Takashi Iizuka beat Best Friends (Beretta and Chuckie T), Jeff Cobb and Michael Elgin via disqualification. Chuckie T wailed on Iizuka with a steel chair as he was about to use the iron claw. Chuckie then started beating on Cobb and Elgin. Beretta had to drag Chuckie away from the ring.

Will Ospreay beat Taichi to become the number one contender to the NEVER Openweight Championship. Ospreay defeated Taichi with the Stormbreaker.