When Mauro Ranallo debuted as a color commentator for WWE’s Smackdown Live in 2016, for many wrestling fans it was a welcome resurgence of the highly enthusiastic stylings not heard since the days of Jim Ross and the late duo Bobby Heenan and Gorilla Monsoon. Fans quickly fell in love with Ranallo who would often leap up from the announce table as he shouted his signature catchphrase, “Mamma Mia!” But there was a dark side, fully and finally explored in a painfully revealing new documentary. 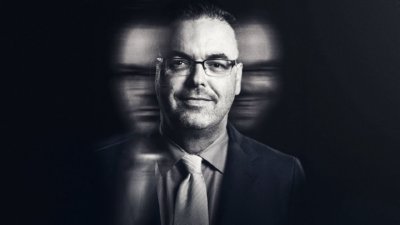 In the doc, Triple H correctly likens Ranallo to the wrestling fans, albeit one with a better seat, with his obviously love for the sport and for covering it.

But then came a very public breakdown. Ranallo missed calling his first ever WrestleMania with the company. Rumors flew about him being the victim of bullying. Twitter and other social media were full of fans sharing how perplexed and deeply emotional they were over his absence.

Friday night, fans were given some profound insight and answers with the premiere of the documentary Mauro Ranallo: Bipolar Rock ‘N’ Roller on Showtime. Ranallo provided a raw, unfiltered and unflinching look at his daily battle with his mental illness, bipolar disorder.

The documentary begins with a look at Ranallo’s childhood on a chicken farm in British Columbia. Viewers are introduced to his parents and siblings who appear throughout the documentary. Less than impressed with all things farming, Ranallo shared that he focused on voices, discovering at a young age that his own was a great instrument. He would make his wrestling debut with the B.C. based All Star Pro Wrestling, then owned by Al Tomko. Tomko was looking for an announcer and Ranallo quickly showed he had the chops, most memorably in the role of a mullet-clad heel manager. (Fun fact: this writer’s uncle, Vince Kreiser, was doing some announcing for All Star during the same time period. Tomko actually called Kreiser and asked him “to help train this new kid as a ring announcer.” That kid was Ranallo.)

Ranallo’s life would change with the unexpected death of his best friend. Ranallo, then 19 years old, would suffer a major breakdown, be hospitalized for the first time, and receive the diagnosis of bipolar disorder.For most viewers, the exact definition of bipolar disorder is sure to be confusing and unfamiliar. Smartly, the documentary includes thorough explanations from Mental Health Specialist, Dr. David Goldbloom. Goldbloom explains that bipolar disorder consists of a combination of depressive and manic episodes. This can mean times of debilitating lows and times of extraordinary bursts of energy that can last for days to weeks to months. It can lead to the sufferer having disjointed thoughts, an inflated sense of self, participating in dangerous or reckless behavior and impulsivity.

Ranallo describes his 20s as a blur and the worst decade of his life. He would be in and out of hospitals six times. But despite his personal struggles, his talents continued to get him noticed. He would be hired as the voice of Stampede Wrestling in 1999. Ranallo would become close with the infamous Hart family, even dating Jenni Neidhart (daughter of Jim, sister to Natalya) who appears in the documentary. Having Neidhart and other people in Ranallo’s circle offer further perspectives on his illness is another wise and often overlooked choice. These interviews emphasize that it’s not just the sufferer who suffers, everyone around you can feel helpless and extremely affected by a mental illness. But despite having the experience of being a member of a family known to have its own quirks and eccentricities, Neidhart would reach her limit and break up with Ranallo and he would be hospitalized for the seventh time in his life.

Again Ranallo’s talent would pick him up. Ranallo would go on to provide commentary for Pride in 2003 which would lead to an opportunity to work with The Fight Network in Toronto. In 2007, he would be calling MMA bouts for Showtime. Despite the continued and rising success, Ranallo’s illness had him doubting his abilities. He shared that he would awaken each morning with a panic attack. He would be hospitalized for the eighth time.Ranallo then moves to California, and his family and friends are concerned with his decision to not take his medications. Fed up with the side effects of bipolar medication, which can include weight gain, lethargy, and other difficult symptoms, Ranallo shares that medicinal marijuana “keeps me alive.” Ranallo would become the lead commentator for Showtime boxing in 2012.

The final section of the documentary touches on Ranallo joining the WWE. Fans tuning in expecting to see ample coverage of Ranallo in the WWE might be disappointed, but both Michael Cole and the aforementioned Triple H appear in the documentary praising Ranallo’s talents and perseverance.

Just like Ranallo’s disorder, viewers are taken on a journey with the highest of highs and the lowest of lows. For some viewers, especially those unfamiliar with mental illness, the documentary can be uncomfortable to watch. And if you just know Ranallo through his commentary, seeing him doubt and harshly criticize himself and go through mania will be a shock. But as Ranallo himself says “not everything can be hunky dory.” Watching Ranallo break down can feel intrusive, but this is essential viewing. If you can hang on, for just over an hour of your time, you will come out the other side with a greater understanding of mental illness and an appreciation for Ranallo’s life objective to “smash the stigma!”

If this writer could be allowed to be completely candid, when this story was up for assignment, I immediately knew I had to do it. I also feel a great responsibility to not mess this up! The airing of this documentary is one of the most important moments in my life. While that may seem like an extreme and exaggerated statement to some, it really isn’t. See I too battle a mental illness, for me it’s depression. I was diagnosed when I was around the same age as Ranallo was and like him I also spent time in a psychiatric hospital. The true nature of my hospital stay is something I have only shared with a select group of people. Here it comes: I was hospitalized for a failed suicide attempt. But to most of the people in my life, I was hospitalized for an allergic reaction. My family and I purposely lied about it. And I would continue to lie about my condition for years. This shame would eat away at me. But fortunately I found solace in watching and writing about professional wrestling. So to see Ranallo, someone involved in wrestling, being so public and honest about his mental illness has meant that others, including me, can FINALLY be honest too.Another important message explored in this documentary is Ranallo achieving great success, despite having a mental illness. There is still a huge stigma on our planet that if you have a mental illness you are not able contribute to society. Don’t believe me? Check out this conversation I had with a doctor, yes a doctor, who was prescribing me medication for my depression:

Doctor (highly incredulous): “You have a journalism degree???”

Doctor: “From the University of Regina?”

Doctor: “But that’s really difficult. My daughter is in that program right now!”Me: (sigh)

The doctor would then speculate (out loud) that I must have used illegal drugs to get me though the completion of my degree. I’m not making this up! For the record, I didn’t, but this is just some of the stereotypes I, and countless others, have to face. Having a mental illness can mean proving yourself, your worth and even your humanity again and again. But with documentaries like Ranallo’s, I can’t help but be hopeful. As Ranallo concludes in the documentary: “Mental health is a life sentence, but it does not have to be a death sentence.”