There’s a treasure trove of memories on the pages of the just-released book WWE RAW: The First 25 Years. For all the great “I remember that” moments, there are plenty of times you’ll go, “I don’t remember that AT ALL!”

With that, I need to add the caveat that, while I have covered pro wrestling for 30 years, I don’t always tune in on a regular basis, knowing that my capable, hard-working crew at SLAM! Wrestling will have the shows covered.

So what are you getting with WWE RAW: The First 25 Years? 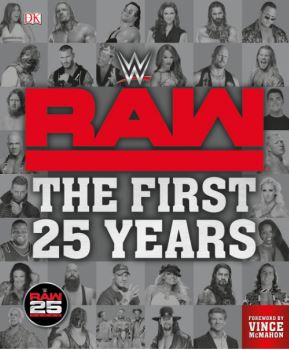 It’s a beautiful coffee-table book, typical of the DK Books – WWE partnership, colourful and with plenty of good-sized photos on its 200 pages, which are enjoyable in a “Throwback Thursday” kind of way. It goes through the 25 years of Monday Night Raw year by year. Some of the years get four pages, some get six, some get eight.

The text, by Jake Black, Jon Hill and Dean Miller, is short and to the point. Certain dates are picked out, and the important match or angle from that show is recapped. The sidebars are important too, like “Introducing…” where a wrestler first arrives on the main show; those include a very short recap of the wrestler’s career.

The other regular sidebar, “Elsewhere in WWE,” is an attempt to cover for the fundamental issue with a book like this — it’s really only one night of the WWE’s weekly cycle that builds to a pay-per-view. It’s akin to only writing about the home games of the Vegas Golden Knights this past season; while they might have been noteworthy games, it hardly tells the whole story of the year, and omits the playoffs.

Given how little space is allowed, there is only sometimes room for context. Johnny Polo comes up early on Raw, but no mention that he became the more-noteworthy Raven at that point… but Raven comes up far later in the narrative.

The city that is hosting Raw only shows up on occasion. Announcers get some love, their comings and goings documented. The actual behind-the-scenes negotiations that saw Raw leave the USA Network for Spike TV for five years aren’t detailed, but at least the fact that the shows were on different channels is noted. There’s also the typical WWE gloating over battling to overcome World Championship Wrestling in the ratings, as if the only thing that killed WCW was that WWE started to get hot.

If you are anything like me, your eyes will gloss over the far-too-frequent use of overused words like “classic,” “unforgettable,” “iconic,” “legendary,” “epic,” and “exciting.”

As for the content, every viewer has their favourite moments, as “astonishing” they may or may not be. The book almost serves as a TV Guide (though younger readers won’t get that reference), meaning that you can see the write-up on the debut of the Spirit Squad (Jan. 23, 2006) and then head to the WWE Network to see if you can find and watch it.

But again, it is not a week-by-week recap. There’s plenty that is glossed over, or ignored altogether, like the clumsy, rushed to air tribute show to Chris Benoit, who killed his wife and son before himself in June 2007.

I found myself chuckling at memories, like Mr. Socko’s debut, or Mickie James as the Trish Stratus stalker, and puzzled at how I completely had forgotten the likes of Tyson Tomko and Kevin Federline, or the feud between Animal and Hawk of the Legion of Doom (not the Road Warriors in WWE, remember!).

With all that in mind, it’s fair to say that WWE RAW: The First 25 Years is both superficial and a fun read. Don’t go into it expecting depth and analysis and you’ll be perfectly happy and entertained.