Toronto native and six-time TNA/Impact Knockouts Champion Angelina Love returns to her homeland for House of Hardcore’s first venture into Napanee, Ontario. And to Love, stepping in the ring in Canada is “a feeling different from any other.”

“I’m super excited,” Love said of returning to the Great White North. She was born in Toronto, about two-and-a-half hours southwest from Napanee. “I love wrestling in Canada because I find that Canada is very unique in that when its hometown wrestlers go back home to perform, there’s so much support and so much love.”

What makes House of Hardcore stand out from other promotions is the “mastermind” behind the entire endeavor — Tommy Dreamer himself. Dreamer, according to Love, uses talent in “the best way” and understands how to market his shows.

“His entire life is wrestling, and it probably will be forever,” Love said. “He’s so smart when it comes to what’s best for business… He just does no wrong in my book.”

Love joins Dreamer, Billy Gunn and Nunzio/Little Guido, among others for the June 1 event. [Tickets here.]

Athletics always have been a part of Love’s life, from playing softball to participating in figure skating and track and field.

“I’ve always been drawn to performing,” said Love, a lifelong wrestling fan. “So when I saw wrestling, it was the best of both worlds combined, and I remember just being enamored with the production of it and how flashy everything was.”

Love debuted as a valet in 2000 at 18 years old, and transitioned to wrestling less than two years later. But switching to in-ring competition hadn’t even crossed her mind when she broke into the business. She just wanted to be a valet — preferably for “The Heartbreak Kid” Shawn Michaels.

“I was obsessed with him,” Love said. “I would dress up and watch wrestling in my basement and pretend like I was managing Shawn Michaels… I knew wanted to [be a] manager. I probably managed for about a year and a half before I started training.”

She made the jump, as Angel Williams, simply because she got bored — being ringside and watching the matches made her want to be more involved.

So, in 2004, with less than five years in the business, Love was signed to a WWE developmental contract. She worked in Ohio Valley Wrestling and Deep South Wrestling for about two years. In that time, Love said, she “learned so much” because they were constantly training — from working on timing and ad libbing to putting together a match with little to no preparation time.

“I used to be a really introverted kid,” Love said. “I was scared to death when I had to get up in front of the class and give a three-minute speech… though [in] wrestling, you kind of don’t have a choice. You’re kind of forced out of your comfort zone.”

This helped Love learn to have “no problem” talking on the mic in front of thousands of people.

“I’m really animated and really expressive and open in my personality… It really helps me when it comes to being able to talk on the microphone and portray my character,” Love said.

While female athletes competed in TNA/Impact from the beginning, it wasn’t until five years after the company’s inception that a women’s division was born, complete with a Knockouts Championship and, eventually, Knockouts Tag Team titles. Love has been an integral part of the division, which, she said, earned its place due to the state of the industry at the time it debuted. 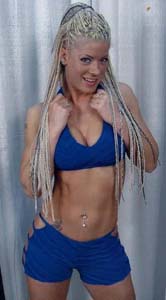 Angelina Love back in her days as Angel Williams.

“Wrestling really needed women to step up and be like, ‘Look at what we can do. We can hang with these guys, and maybe get better ratings than some of the guys,'” Love said.

She also said that the division was something “the fans really wanted to see.”

“They also thought, ‘Wrestling really needs this,’ and that’s why we got so much love and support,” Love said.

A Knockouts champion a half-dozen times, a key part of Love’s success was the team she and Velvet Sky formed as the Beautiful People. Love said Sky and she knew each other before TNA/Impact, and just “clicked right away.” When the Knockouts division was created, Love said, the two of them noticed that all of the women were their own “singular” characters. But Love and Sky and had the same ideas when it came to wearing a lot of makeup and “little skirts” — and they were different from the rest of the division.

“We were always sparkly and flashy,” Love said. “We really clicked personality wise too… [and would] finish each other’s sentences.”

She believes that the Beautiful People, which later included Madison Rayne — both as friend and foe — was the biggest part of her career.

“We were doing something that at that time nobody else was doing,” Love said. “I think the business needed it. I think the fans really wanted to see it. Our superiors, thankfully, were very confident in us and our abilities… We were always given the ball by Vince Russo.”

The duo also, to Love’s knowledge, was the only female tag team up for tag team of the year in Pro Wrestling Illustrated, alongside the Motor City Machine Guns and Beer Money.

‘NO DENYING’ WOMEN NEED THE SPOTLIGHT

As part of the Knockouts division, Love was involved in various firsts, such as the Queen of the Cage Match in 2008 and holding the Knockouts Tag Team Championship, long before WWE’s Women’s Evolution. However, Love said she thinks WWE’s firsts are “amazing” and that NXT has played a key role in ushering in change because “the girls now are totally kickass.”

“There’s no denying that women need to be given the spotlight in wrestling… You just can’t deny that the fans want to see awesome women’s wrestling,” Love said, “and WWE, they had to — they’re the top of the industry. They had to see that.”

And while she is “super proud” of everything she has accomplished in her career — and the fact that she’s still in demand is “an incredible blessing” — the former Knockouts division mainstay said a true run in WWE would be a chance to share her talents with the world on the “biggest platform.”

“I would honestly love a really good successful run in WWE,” Love said. “I know I still have it in me. The ball’s in their court. If they want me, let me know. I’m always ready. I always have been.”

In a dream-match situation, Love said Trish Stratus is someone she always has wanted to face — a “battle of Toronto,” if you will — along with Charlotte Flair and Sasha Banks.

“They’re just doing amazing things for women’s wrestling. I would love to be able to get in the ring with them and make magic together with them, too,” Love said.

However, Love said she loves the teaching and training side of the industry as well.

“I love doing seminars. I think I have a lot to offer,” said Love, who has a young son with ex-husband Davey Richards.

It’s always good to help others with promos and character development, according to Love, along with wrestling style. “I would love to be able to be put in a spot where I can help the next generation figure out who they are and mold into,” Love said.

For more information about upcoming House of Hardcore shows or to purchase tickets, visit houseofhardcore.net.