Devon Fielding, who wrestled as Max Devlin and Dutch Fielding, died on December 4. Some of his colleagues from the rings and roads of Western Canada shared their memories of him.

Born on September 14, 1975 in Saskatoon, Saskatchewan, Fielding grew up in the small Saskatchewan town of Eston. 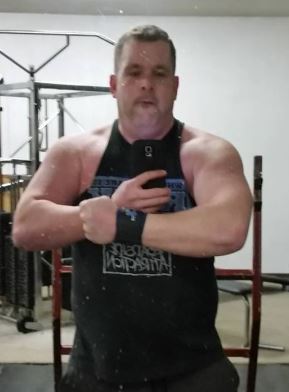 Back when Wellington (Shayne Bower) died in 207, Fielding shared some of his memories of that training.

“Shayne was the guy who broke me into the business. That was probably about ’94. We started off as mentor/mentee type deal, and just kind of went from there. We ended up moving in together and becoming really good friends,” recalled Fielding.

Wellington battled addiction issues, but Fielding stuck by him. “Then it turned into a me babysitting him when he was having his problems. Everybody kept saying to me, ‘Why do you keep doing it?’ I’d go, ‘He’s my friend.’ Everybody said, ‘Well, he’s got lots of friends.’ ‘Yeah, well I don’t.’ There’s a long period of time where I had to clean him up, dust him off, carry his bags and get him to the next show.”

Fielding was the kind of guy who enjoyed the camaraderie of the dressing room as much as the in-ring action. And, because of his various guises, including as one of many Doink the Clowns, he wasn’t always recognized by fans.

But the other wrestlers knew him.

Steve Rivers: Back in the mid nineties, Devon was trying to break into the wrestling circle in Calgary. He was training and hanging around the boys like myself, Rick Titan, Beef Wellington, Phil Lafon. He was really really green so we hid him in gimmicks like Freak Fiction (dressed in a black s&m outfit like the gimp from Pulp Fiction) and even Doink the Clown. He loved doing them and embraced it. He didn’t care what he was doing as long as he was in the ring!

He was so proud of being able to book a show in his home town of Eston, Alberta. He brought the boys over to his mother’s house for a big dinner before the show and took good care of us. I think he loved the idea of having a house full of wrestlers at his mother’s home! Of course, that night we bloodied up the hometown boy early in the show but put him over at the end of the night as the hometown hero. Devon always showed me tremendous amounts of respect and stayed in touch even after he left the business. Another friend gone too soon. Devon had a great loyalty to his friends and I feel privileged to be counted as one of them.

Aidan Synn Pringle: I met Devon in Calgary in 1998 on a tour with Can Am as I recall. He was a gimmick from the time I met him. He wasn’t a technical expert but was a 1990s pro wrestler as much as anyone in those days. He would be up to all sorts of antics on the road. He’d wear his leather zipper faced mask in 7-11 and rub his face on the hot chicken glass case shouting “Warm!” All eyes on him and the boys laughing he’d then say “Hot!”

He always had a way of making me smile and laugh. He always seemed to get a kick out of me as well. When I wasn’t wrestling I was working construction job in Vancouver. The work dried up there so I was able to land a two-week job in Edmonton. Devon offered for me to come and stay with him and his super cool daughter Brooklyn. He didn’t ask for anything, in fact he BBQ’d us steak and took me to the gym. I was always fond of Devon and Brooklyn. It saddens my to think I’ll never get to crack jokes with Bone Cracker a.k.a. Devon and that I haven’t met his son Hunter yet. You are, and will be missed Mr. Fielding. My condolences to Brooklyn and Hunter and the rest of Devon’s family and friends. Sincerely, Aidan Pringle

Dustin Meyer was one of those fans in Eston, and would become a pro wrestler himself as “Hollywood” Dusty Adonis. 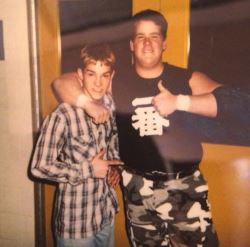 Dusty Adonis: He was about seven years older than I. He was my hero. He went away to Calgary after he graduated. We both were infatuated with wrestling and babysat me and I looked to him as an older brother. He went a become a wrestler and wrestled for quite a few years. I don’t know all the details about his career. I myself went to Calgary to become a wrestler eight years and later and Devon helped pave the way for me. He knew so many wrestlers and it helped me get started. I became Hollywood Dusty Adonis. Devon booked me in my first ever match when he booked a card in Whitehorse, Yukon, in 2004. Mainly using ECCW guys. He used a few other Alberta workers like Steve Rivers and JD Michaels besides myself. After I was in the business for a few years I was wrestling in Edmonton monthly, Devon would come and support me a lot, as he had been retired.

The Can Am Wrestling shows in Eston were memorable, and Meyer was in the front row at all three shows put on in the small community.

Dusty Adonis: Devon’s first show in Eston his grandmother came to watch. She was a bigger lady with a cane. She sat front row. Well Devon was receiving a trophy from someone in the town congratulating him for being “Eston’s first Professional wrestler.” Bad News Allen comes out, and has some harsh words for Devon and the town and smashes his new trophy on the floor. Devon’s Grandma gets out of her chair thinking this is all real and chases Bad Bews around the ring with her cane yelling profanities! It was hysterical — only time Bad News probably ever backed away from a fight!

However, like his mentor, Shayne Bower/Biff Wellington, Fielding apparently had his substance abuse issues as well.

“British Bulldog Jr.” Harry Smith: Devon and I were pretty good friends and I was really surprised to hear about his passing, I just got the news when I woke up in Japan this morning. I’m hoping it wasn’t drug related but we’ll find out soon. I know Devon had stayed clean for years and admitted having some drug problems for years. Which I respected him for staying clean and he was never bitter with wrestling and had two children he cared for and used to make custom action figures to pass his time instead of doing drugs.

No cause of death was listed in the obituary, and there will be no funeral. Fielding, who called Drayton Valley, Alberta, home, died unexpectedly on December 4, 2017. He was 42. He leaves behind his daughter, Brooklyn Fielding; son, Hunter Jabs; brothers, Scott and Michael Fielding, as well as by many extended family and friends. Devon is predeceased by his parents, Paul and Sandra Fielding.