Cornette explains his confrontation with Santino on Prichard podcast

DETROIT – On Sunday afternoon, before WWE’s Hell in a Cell pay-per-view, Jim Cornette appeared on a live edition of Bruce Prichard’s podcast to explain his side of the confrontation with Santino Marella at a convention in Detroit the day before that resulted in both being sent home.

The scene was Detroit’s Saint Andrews Hall, and the audience was there to hear Cornette on the Something to Wrestle with Bruce Prichard podcast. 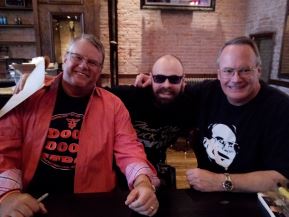 In a photo posted to Twitter, JR Blanton‏ (@Fringezilla) poses between Bruce Prichard and Jim Cornette on Sunday afternoon in Detroit.

At the XICW Return to Cobo convention on Saturday, celebrating the history of professional wrestling in Detroit’s famed Cobo Hall, the real-life feud between Cornette and Marella was reignited. The conflict between the two started 15 years ago in WWE’s developmental promotion, Ohio Valley Wrestling. Cornette was attempting to get the Boogie Man character over by having various wrestlers show fear when they encountered him. Marella did not show fear, and in fact, smiled at the Boogie Man. Angered by Marella’s performance, Cornette reportedly slapped him, which eventually was a factor in Cornette being fired from the WWE. Cornette has been critical of Marella’s comedic performance for many years calling him a “black eye on the industry.” Cornette explained on Something to Wrestle with Bruce Prichard that most of the stars cancelled their appearance at the convention so they got Marella in desperation.

According to Cornette, they had not spoken to each other since they both worked together. Marella introduced himself and extended his hand for a handshake, and Cornette did not want to shake Marella’s hand, however, he did it anyways. The two were initially talking cordially and laughing. When Marella asked to “talk things over,” Cornette responded by trying to walk away to which Marella repeated himself about talking things over. After Cornette made multiple attempts to walk away, Marella demanded that Cornette “settle this.”

Cornette thought to himself, I can’t slap him in a crowded public place, and did not want to be arrested and put into a Detroit jail (the crowd found this funny and offensive at the same time). At this point, the YouTube video of the confrontation begins with Cornette yelling obscenities at Marella. Security guards informed both men that the police were called so Cornette packed up his belongings and left the Cobo Center. Cornette believes that Marella was trying to pull a scam by attempting to have Cornette initiate a fight, and that Marella wanted to sue him for his money since he is an “unemployed comedian jobber.” The crowd was behind Cornette during the whole story with fans yelling obscenities about Marella. This story was approximately 15 minutes into the show and Bruce Prichard thanked everyone for coming and stood up signalling that the show was over. Prichard and everyone else in attendance knew that this story was going to steal the show.

Prichard returned to his seat giving a look of “how am I going to follow this?” Prichard and Cornette proceeded to tell a few Vince McMahon stories such as the time he was detained by federal agents after getting off a plane. They were on a plane with McMahon sleeping when the flight attendant announced that due to bad weather they would be delayed landing. McMahon woke up and asked the flight attendant why they were circling above the runway, to which the flight attendant walked away without responding. The frustrated McMahon knocked on the pilot’s door wanting an answer to his question. The pilot told McMahon about the bad weather and he took his seat. When they landed, McMahon was detained by federal agents since the flight attendant and pilot perceived McMahon’s questioning as threatening. McMahon was released after he gave his side of the story saying he didn’t hear the announcement since he was sleeping. This story has been told on a few other podcasts, however, having Prichard and Cornette tell this story live gave new life to the old story. Prichard told stories that were not on his podcast, most of which have a sexual nature as the backbone of the story.

Cornette’s facial expressions throughout his storytelling greatly enhanced emotion, as compared to his audio podcast. Given his nuanced body language it is easy to understand why Cornette is regarded as one of the top mangers in the history of the wrestling business. Cornette and Prichard would perform impressions while holding up cardboard cut out faces of Paul Heyman, Michael Hayes, Vince Russo, Vince McMahon, Jerry Jarrett, and Jim Cornette. Towards the end of the show, famed Michigan native “Irish” Mickey Doyle who wrestled in the 1970s and ’80s with the original Sheik and other big names was warmly received by the crowd in Detroit. Prichard and Cornette played off each other very well and made this show great to watch — and listen to.