DETROIT – Saturday afternoon, at a convention celebrating the storied history of professional wrestling in Detroit’s famed Cobo Hall, a couple of the event’s featured guests reignited a feud that started 15 years ago. The problem? The heat between the parties was real, the confrontation was unplanned and unscripted, and ultimately, both parties — former WWE superstar Santino Marella and legendary manager Jim Cornette — were ejected from the building. 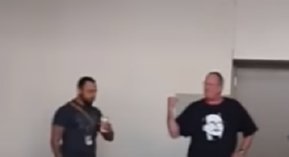 Jim Cornette, right, walks away from Santino Marella in a YouTube video still of their confrontation in Detroit on October 7, 2017.

The enmity between the two started many years ago when Cornette was running WWE’s developmental promotion, Ohio Valley Wrestling. Cornette had instructed the wrestlers to react in fear to sell the Boogie Man character. Santino apparently didn’t do so, and in fact, may have laughed at the character instead. Afterwards, frustrated by Santino’s performance, Cornette slapped Santino. This ultimately led to Cornette being fired from WWE. In the years since, Cornette has reportedly been critical of Marella and his comedic character, occasionally calling him a joke and a “black eye on the industry.” Apparently, and not unexpectedly, this didn’t sit too well with Marella, which led to today’s altercation.

Though details are sketchy, since much of the incident took place in the building concourse of the Cobo Center outside of the event hall where the XICW celebration reunion was taking place — SLAM! Wrestling was able to piece together the following loose chain of events based on our observations, accounts from those who claimed to witness the events as they unfolded, a brief video, and comments overheard as the participants dealt with security in the aftermath. Given the conflicting accounts, the truth is probably some combination of everything noted below, and ultimately may never be fully known.

That in mind, here’s what we were able to piece together:

– Santino and his friend had just finished lunch at a cafe in the concourse.

– They were heading back to the convention hall, when they ran into Cornette who was heading in the opposite reaction.

– Santino extended his hand to Cornette, and they shook hands.

– Santino introduced himself (as Anthony Carelli, his real name) and suggested that it was time that they talked things over. And then said something to the effect of “I think you owe me an apology.”

– ‎Cornette said something along the lines of “I know who the f*** you are, you’re a motherf***ing joke.” And then tried to move around Santino.

– Santino apparently blocked Cornette’s path and some heated words were exchanged. Santino then either dared Cornette to slap him again, or threatened to slap him.

– At some point, Cornette started screaming, including some obscenities, at which point, building security tried to confront him.

– Cornette made his way back to the convention hall and to his merch table. He may have been bumped by a security guard on his way. A number of guards accompanied him to the table, and he was told that he had to exit the premises.

– He then started packing up his merch, telling his fellow event guests that he “won’t be in the same building with that guy.” Though many people tried to get him to reconsider, Cornette was not hearing any of it.

– As he was packing up, Cornette alleged that Santino asked him to slap him and wanted “to go over” on him. He expressed disbelief that “me, Jim Cornette, was the one trying to avoid an argument for once.”

– Santino was sitting at a nearby table, but didn’t respond to the comments or seem otherwise upset by the events.

– Cornette continued to pack, though was stopped at one point by security who wanted to speak to him to presumably get his statement. After finishing with them, he packed up the remainder of his things and left the building accompanied by a number of guards.

– As Cornette left the hall, Santino could be heard singing, the “Na Na Goodbye” song.

– Some time later, security pulled Santino aside for a discussion.

– Apparently, security had decided that all of the parties involved in the altercation had to leave the premises, and if they didn’t comply, they would shut down the entire event.

– When they finished, Santino and his friend said their goodbyes to some friends at nearby table, and left without any resistance or comment.

Later, Cornette tweeted about the incident: “Sorry to anyone I missed at Cobo, some comedy midget wanted me to slap him AGAIN so he could sue since he’s unemployed. Walked out instead.”

Unfortunate as it was, the incident and the related aftermath, was certainly memorable. And something the crowd — somewhat small in number, and seeming even more so given the vast expanse of the convention hall, which could have housed thousands of people comfortably — won’t forget. It’s safe to say that Cornette won’t either, and will talk about it at length during his appearance at a live edition of Bruce Prichard’s podcast Sunday in Detroit (hours before the WWE Hell in a Cell PPV in the city’s new Little Caesars Arena). 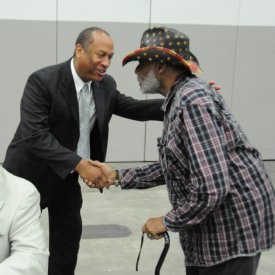 AT Huck meetings up with Thunderbolt Patterson. Photo by Mike Mastrandrea

Other than that, the convention was a standard affair, with various vendors, and a good representation of stars from many eras of wrestling, many of whom were familiar names in the Detroit area. Legends like “Irish” Mickey Doyle, Hall of Famer Dominic Denucci, and Thunderbolt Patterson were there with Attitude Era names such as Buff Bagwell, Shane Douglas, and Al Snow. The current era was well-represented as well by talents like Impact Wrestling’s Abyss and Detroit area’s Kongo Kong, as well as Canada’s own Petey Williams, Johnny Devine, Cody Deaner, Crazzy Steve, and Toronto hardcore icon “Bloody” Bill Skullion with his mini protégé, Kid Canuck. Plus there were plenty of the Detroit area XICW names of today, like MM3 and Gavin Quinn, and the past, like The Bug.

Later on Saturday night, many of those stars, and others, including female sensations Mercedes Martinez and Mia Yim, competed on a wrestling card that was promoted with the convention. The crowd, full of XICW loyalists, was pretty into the matches, especially Zach Gowen’s return to action, and the Monroes facing Decay in a cage match. In an odd moment, there was no ladder available for the ladder match for the Midwest Championship Wrestling title defense by Gavin Quinn against Hakim Zane and Impact Wrestling’s Rockstar Spud, so it was turned into a three-way dance which Rockstar Spud won.

Though, for many, Cornette vs Marella will be seen as the day’s true main event; no word if there will be a rematch.

— with files from Brad McFarlin