Return to Cobo a long-time dream for Monroe family

For a while now, Malcolm Monroe II was consumed by the desire to bring pro wrestling back to Detroit’s Cobo Hall. This Saturday, October 7, with a fan fest and a stacked wrestling card, he is doing just that, the proverbial dream come true. And it’ll be a family affair through and through.

You see, Malcolm Monroe II’s late father was Sweet Daddy Malcolm Monroe, a Detroit-area wrestler that died in 2004. And the third-generation in pro wrestling is Malcolm Monroe III — MM3 — who will team with his father, best known as DBA (Dirty Black Assassin) in one of the featured bouts, a cage match against Impact Wrestling’s Decay (Abyss and Crazzy Steve).

“My dad started out as an usher at Cobo. I really don’t remember that. I wasn’t born yet. I was just born when he started wrestling,” Monroe II told SLAM! Wrestling. “He trained with Lou Klein and then he started wrestling in ’74. But what I remember about Cobo, roughly around ’84, ’85, ’86, something like that, when NWA used to come to Cobo, that’s what I remember about it. I remember Jim Cornette and the Rock’n’Roll Express and the Road Warriors, the Sheik, Dusty Rhodes, the list goes on and on. I remember being backstage with those guys at Cobo.”

MM3 has heard about the plan for quite a while. “Cobo has been a huge goal of ours for a really long time. My dad first brought the idea to me a few years ago, and we sat down and we made out a plan on the steps it will take for us to get there, and building the brand, name recognition and stuff like that, and putting on the hottest shows in Michigan pretty much. So it’s just been a constant going out there and killing it, like every night; that’s been our goal, it’s been our mentality, that’s how we rile up our locker room. All the boys have the same goal in mind, and that’s to make sure that nobody forgets XICW. We’re just cementing that legacy by taking it one step further and doing what no other independent company has done in 35 years, and that’s return to Cobo, which is like the Mecca of pro wrestling in the Midwest.”

The Monroes’ promotion, XICW (Xtreme Intense Championship Wrestling), is celebrating its 17th anniversary in business, so what better place to have it than Cobo … except it isn’t the same Cobo Hall from the heyday of The Sheik. 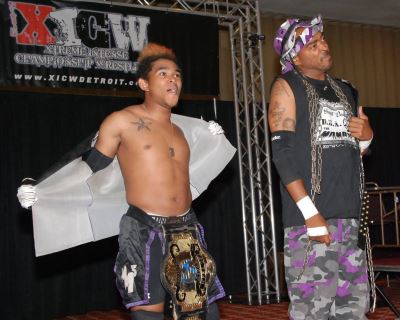 Cobo Hall, right in downtown Detroit, opened in 1960. It was conceived as the home to the NBA’s Detroit Pistons, but KISS made it legendary by recording most of its first Alive album in the venue — “Detroit Rock City” anyone? All the major names played there: Deep Purple, Jimi Hendrix, Pink Floyd, the Rolling Stones, Prince, Yes.

However, despite the fact that he wasn’t the first or last wrestling promoter to run Cobo Hall, it really is known as “The House The Sheik Built.” (Officially it is named after Albert E. Cobo, mayor of Detroit from 1950 to 1957.) Sheik’s Big Time Wrestling ran there from 1965 to 1980, and with his manic, maniacal styles, Sheik carved a reputation … and then ran the promotion into the ground by not adapting to the times. Weekly shows had become bi-weekly, then monthly or less. When The Sheik threw in the towel, “Crybaby” George Cannon tried running Superstars of Wrestling shows there. Later the NWA and WWF used Cobo Hall as a venue in Detroit, a less expensive option than the Joe Louis Arena (which opened in 1979 and just closed), or arenas outside of downtown, such as the Palace of Auburn Hills or the Pontiac Silverdome.

In 1989, Cobo Hall changed, though, becoming Cobo Center, a convention center with banquet rooms and meeting rooms, home to auto shows and summits. It’s into that location that Monroe II’s dream arrives.

“I had to jump through a lot of hoops to get the building, but I had help from some friends,” he said.

Long-time area referee AT Huck, who Sweet Daddy Monroe started in the business, said that he and Malcolm the elder used to talk about running Cobo. Both had seen many matches at Cobo Hall when they were younger.

Now it is Monroe II who has made it all happen, and Huck is like a proud papa.

“Malcolm told me more than a year ago that this is something that he wanted to do. Slowly but surely he started putting the pieces into place, and hooked up with a connection at Cobo, and everything started to materialize. All I can really say is I’m really proud of him because it’s really a big undertaking, running a show like that at Cobo,” said Huck, recognizing the added paperwork for an undertaking of this size. “You’ve got to deal with unions and things like that now, it’s not like it was back in the day. During The Sheik’s days at Cobo, I don’t think he had to jump through so many hoops as you have to do nowadays.”

There are two major parts to the Saturday at Cobo Center, and some tickets remain for both events. 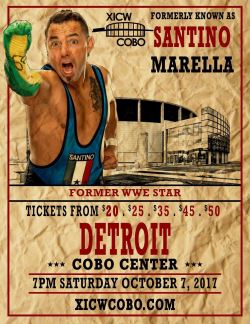 In the evening, XICW presents a huge wrestling show, ambitious and varied in its product. The main event is Gavin Quinn defending Midwest Heavyweight championship in a ladder match against Hakim Zane and Impact Wrestling’s Rockstar Spud.

Quinn said that he had heard “rumblings” that XICW might try to run the big venue. “I’d heard a couple of guys backstage saying something about Cobo or somebody was throwing Cobo around, but it just seemed so far-fetched, you know what I mean?” Quinn said. “It was about a year ago, we had a pre-show meeting and Malcolm stood up in front of everybody and told everybody what the plan was. It was exciting, super-exciting. It came up fast, man, it came up really fast. It’ll be really fun.”

There’s the cage match with the Monroes against Decay; Huck will referee that one, his only assignment of the night after years in stripes, including time with the original ECW. MM3 is pumped. “Me and my dad have actually already defended our titles against Crazzy Steve and Abyss, but it wasn’t in a cage match, it was in a normal-setting match. I’m really interested in seeing how this one plays out. It’s going to be a little more chaotic and just all over the place. Me and my dad just won a cage match maybe two months ago, so I’m pretty confident in our chances in this one.” 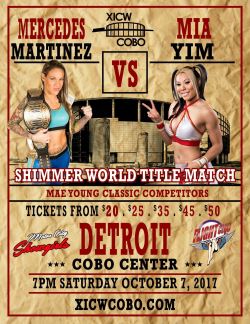 For those not into ladder matches or cage matches, there’s plenty of other goodies: Shane Douglas faces Al Snow in an old ECW rematch; Zack Gowen takes on the massive Kongo Kong, who is now far better known nationally thanks to his time on Impact Wrestling; Mae Young Classic tournament participants face off, with Mercedes Martinez putting her SHIMMER World title on the line against Mia Yim; Joe Coleman takes on Mahabali Shera of Impact; there’s a big battle royal; and a number of other notable names are on the show too, including Johnny Devine, Buff Bagwell, Petey Williams, and Cody Deaner.

Monroe II purposefully set up the show to have variety, noted how the independent wrestling business has changed over the years. “We had to adapt to the indy scene over the years. When we first started 17 years ago, we were more like ECW, more of the hardcore, hard-hitting style. Through the years, we had to adapt because that fanbase kind of died down. Now we do everything — we do the hardcore, we do the high-flying, we do the old-school, so we have a little bit for everybody.”

While there are plenty of fans who are excited about the return to Cobo, there’s little doubt that the stressed-out Monroe II is probably the most excited of all.

“When I booked this show, I wanted to give it to all the fans. It’s been 35-plus years since independent wrestling has been at Cobo so I had to go back and think 35 years of wrestling, so I had to do it all — women, midgets, cage matches, old ECW alumni matches. I just had to pull every trick out of my hat.”