The odds may be against her but Gail Kim is looking to capture the GFW Knockouts Championship for a seventh time.

In the four-way match at the Bound for Glory pay-per-view in Ottawa on November 5th, Kim will face champion Sienna and challengers Taryn Terrell and Allie for the championship. In preparing for the match, Kim isn’t taking any of her opponents lightly. 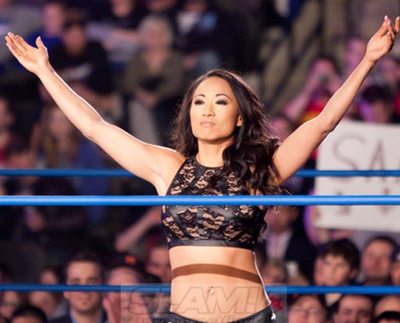 “You cannot count any of the other women out. Taryn, yes she just came back but her and I have a really deep history and I know she is not afraid to take things to another level. Allie and Sienna, I have such deep respect for them because these women are the new generation. They are going to be very hungry and they want to prove themselves so you just never know in a four-way match. Anyone can take the championship,” she told SLAM! Wrestling.

For the Toronto-born Canadian who now resides in Florida, coming back to her homeland and being able to compete for the Knockouts Championship is a dream come true and an honour but it was unexpected happening. Kim’s original plan was to retire during a tour in the United Kingdom but when Canada opened up as a tour date, everything fell into place for her.

“It is a dream come true to wrestle in Canada again and not just that but on a very meaningful night, the 10 year anniversary of the Knockouts Championship. I am going to have some friends and family drive up from Toronto and for me to perform in front of them is what is most important to me. I haven’t seen Canadian fans in years so I know they are just going to be amazing as they always are. I just want to blow them away and steal the show that night,” Kim said proudly.

Although she plans on retiring at the end of this year, Kim will still be a crucial part of GFW. Yesterday she acquired her dual citizenship and for some time, she has been transitioning from an in-ring role to a behind the scenes trainer overseeing the other Knockouts.

“I have already started working with the other girls and I really truly love that role,” said a grateful Kim.

During her first session with the other women, Kim confided in her husband – celebrity chef Robert Irvine – she was not getting the same feeling as when she performed in the ring. Irvine reassured her she would grow in her new role and she has.

“Once I got over that hump, which was very quickly, I really embraced the role,” said Kim.