Eric Denis, a veteran of the Quebec wrestling scene, died suddenly during a match on Sunday. He was 40 years old.

ICW, the oldest promotion in Montreal, held a benefit show on the evening of Sunday, October 8, 2017, at Church of Most Holy Redeemer, raising funds to combat for Crohn’s disease, something the promotion has done annually. It’s a two-part show, running both Saturday and Sunday from 6 p.m. to midnight. 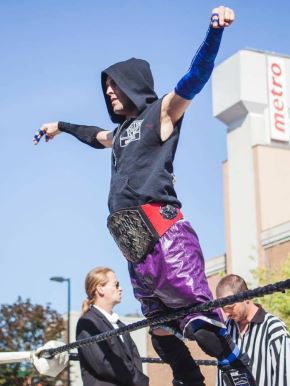 Denis wrestled five short matches on Saturday night before and one earlier on on Sunday, which is a normal schedule when you wrestle during that weekend as an ICW wrestler in a fundraiser.

On Sunday, Denis got in the ring for his second match of the evening. He started the match quickly, gave his opponent two chops, received one, and then was whipped in the ropes. As he got to the ropes, he collapsed

Colleagues rushed from the back to the ring and 911 was called. Less than 10 minutes later the paramedics arrived at the venue, tried to get his heart re-started; they finally got one but as they were hooking him up to some machines, they lost the pulse and it never came back.

Results of an autopsy are not known, but a heart attack is suspected.

Apparently, Denis had been complaining for a few weeks that he felt like there was a pressure point in his back, but thought that it was just a muscular thing and that it would stop bothering him.

He was 40 years old. He had six children and had been wrestling for 21 years. His uncle used to wrestle for International Wrestling under the name of Black Diamond. His father was also a local manager working for ICW in the 1990s. Word is that Denis used marijuana to deal with his anxiety problems. He was in good shape and wasn’t a big drinker. His 14-year old son was there at the venue when it happened.

Denis was well liked because he was always nice and he respected everyone in the business. I personally knew him for 16 years, since I started in 2001. On the first show I ever managed, he was wrestling.

Eddy Dorozowsky — Sexxy Eddy — posted a message to Facebook: “A small message for a fallen member of our Canadian Wrestling family Eric Denis aka: one half of the tag team Crime Inc. He passed away following a Sunday show. We shared a few backstage moments together – you were always smiling, very polite, and had the best tan in the business! You will be missed by your fellow peers, the many fans you entertained, and your loving family. RIP my friend”