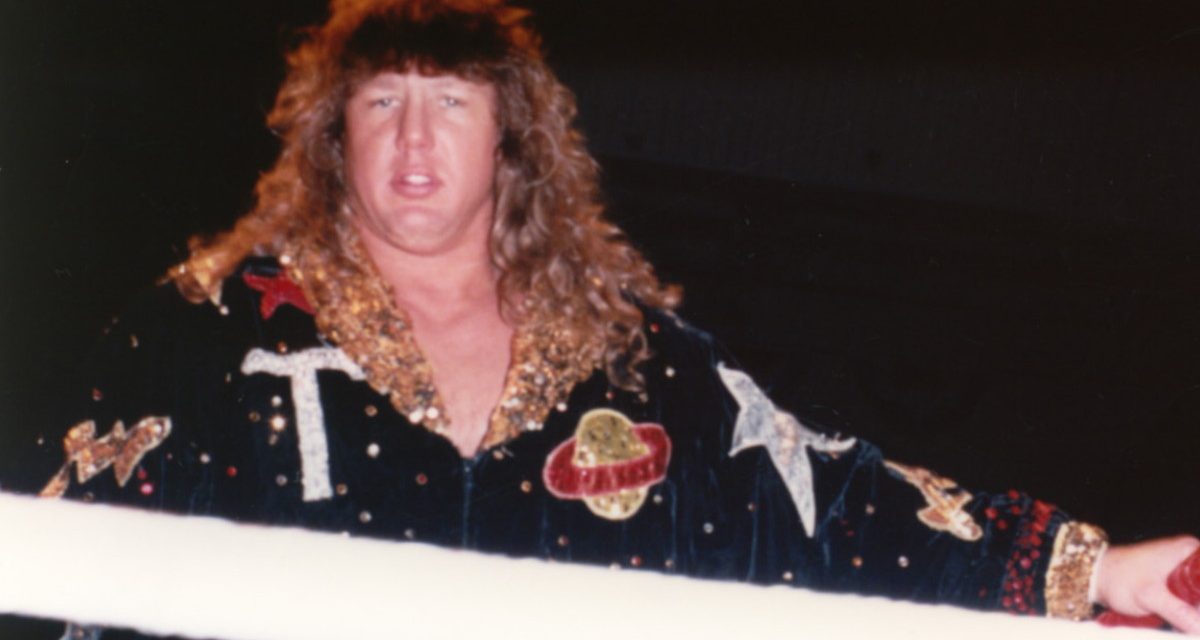 Dr. Tom Prichard is known for being a great trainer and a former WWE star with two tag teams, the Bodydonnas and the Heavenly Bodies. Before he was a “doctor,” trainer and superstar, Tom Prichard was a young, hungry wrestler traveling the wrestling territories that were prevalent in the 1970s and 1980s. One of Prichard’s stops early in his career was the Los Angeles territory.

In 1974, a 15-year-old Prichard began working in the office of Houston wrestling promoter Paul Boesch. By October 1979 Prichard was transitioning from office worker to in-ring worker and having his first matches. 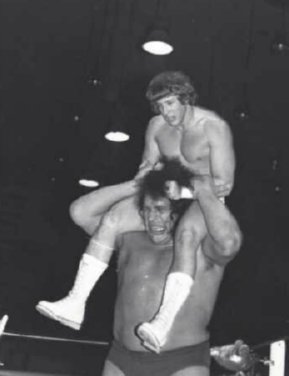 Tom Prichard on the shoulders of Andre the Giant.

One of his very early bouts was a battle royal that featured the wrestling world’s biggest attraction Andre the Giant. “In the beginning of the year, 1980, there was a two-ring battle royal and Andre was in it,” said Prichard. “Paul (Boesch) called Andre in the dressing room and called me over and said, ‘Here is what I would like to do, somewhere in the battle royal everyone gets Andre back in the corner and you (Tom) climb up the corner and get on Andre’s shoulders.’ That’s when I am going to be eliminated. ‘Andre is going to go over by the top rope and then he is going to toss you out.’ I go, ‘Whoa.’ This is my first match in Houston.”

Being held over Andre’s head and staring down at the concrete below was certainly a scary sight for the young grappler. It was a good thing that Andre liked him and Prichard survived to tell the story. Andre made a big impression on a young Prichard.

“He (Andre) was always very cool to me and very cool to everyone I was around especially when we would eat dinner, he would drink the Crown Royal and keep ’em coming,” recalled Prichard. “I was in awe of Andre and I think everyone else was too, I was in awe because here was a guy I watched growing up, now I get to participate in a battle royal with him. Every time I was around him we would go to dinner, get drunk and laugh. He was pretty tame when I was around him. I am holding on to his hair (in the battle royal) and it was very cool.”

Very soon Prichard had to leave the comfort of his home territory in Houston. He had to spread his wings. Did it bother him to leave? Maybe a little bit of sadness entered his heart, but Prichard had the spirit of the wrestler flowing through his veins. “As a kid I just wanted to wrestle and it was the coolest thing to go from town to town, be the vagabond, you are on the road, how cool is that?” recalled Prichard.

At first Prichard was a bit confused as he was booked to enter two territories at the same time. This sort of double booking could have derailed his young career, but respected leaders of the business were looking out for him.

“Well, Paul (Boesch) got me booked in January 1980 in Portland, Oregon,” said Prichard. “Gary Hart was the booker in Dallas and that’s where Paul Boesch in Houston got his talent and Gary came up to me and said, ‘We have you booked in Fresno, California on this date.’ Well, I’m supposed to go to Portland first but Gary said, ‘You go here first.’ I thought Gary would talk to Paul and straighten everything out. I never said anything to Paul so I just flew to Fresno the first night and Gary Hart got me booked there and there was a miscommunication because they were expecting me in Portland the next week. I asked Chavo Guerrero (Senior), who was booking in Los Angeles about it and he says, ‘You are staying here, man.'”

With his wrestling commitments sorted out Prichard was very excited to be in the Los Angeles territory because of its historical significance to wrestling.

“The Olympic Auditorium, back in those days (1950s-’60s) was called the Madison Square Garden of the West Coast,” said Prichard. “Well, I got there in 1980 and business was pretty much down, but because it was the Olympic Auditorium and because it was a famous place and a really cool wrestling arena I stayed there. I was working four days a week and the rest of the time on the beach hanging out having a great time. So the Olympic was a really cool wrestling building because you would go down stairs, have you seen Pulp Fiction? You know after the boxing match when [John] Travolta and the other guy are walking through the halls? That’s the Olympic Auditorium dressing rooms. You would come in, there was a hallway to your left, a hallway to your right, and there were little rooms. It was a really cool place.”

The Los Angeles territory had been a family business since the late 1940s being run by the Eaton/LeBell family for decades. The promotion had fantastic gates and television exposure in the early days of the medium. By the 1980s the local wrestling scene was not what it once was, but it was still a great place to learn the craft. “Mike Lebell, he didn’t pay you very well, but I was just happy to be in the business,” recalled Prichard fondly. “They knew it.”

The atmosphere of the Olympic gave the matches a certain aura or atmosphere that modern buildings lack. Another plus of working the L.A. loop was its influx of international talent from Mexico and Japan. A young wrestler could get a PhD in the sport by learning the various styles. “I worked [Tatsumi] Fujinami in the Auditorium,” said Prichard. “I did a six-week tour to Japan in 1981. It (the Olympic) was a very cool atmosphere, let me say that. It had a lot of history there. It had that big, huge ring set up. They had the big phone number up and they actually had a big clock up there too that would count down when you were supposed to go home. It was just so surreal; it was a very cool place. I don’t think a lot of people cared for Mike LeBell, but they loved [his brother] Gene. Mike was always cool to me, I liked Mike.”

With diverse ethnic talent came a multicultural wrestling crowd. Even though it was towards the end of the promotion’s run, the make up of the crowd could change based on the wrestlers promoted. “They weren’t drawing a lot, they had 500 to 600 people and that barely filled up the bottom section of the arena,” said Prichard. “It was diverse; you had your Mexican fans, Anglo fans and wrestling fans. At that time the Olympic had suffered from a lack of talent. That is where the older guys were coming. Al Madril was 30 years old and I remember that because he is 10 years older than me and he was a pretty miserable guy, 30 years old and just bitching about everything. The fans were diverse and when Fujinami came our ticket count went up as there were a lot of Japanese fans there. That was the first place I had Korean barbeque was in L.A.”

During his stay in the L.A. territory Prichard had the chance to rub shoulders with rising stars and fan favourites of years past. “The first night I flew in to Fresno, [Roddy] Piper was there,” said Prichard. “Piper worked with Andre that night. I got a ride back with Chief Jules Strongbow and the Twin Devils. That is where I first met Piper and he just came in for shots, he was not working the territory at all.”

Another legend he met was known as a famous “doctor” who came to prominence in the New York territory years in the 1950s. “I also met Dr. Jerry Graham the first night I came to the Olympic,” said Prichard. “He was sitting there in a room all by himself and I went in there and he said to come on in. He was drunk, but I told him I was from Houston and we started talking about Paul Boesch in Houston. He was very nice, but I had heard all these things about Dr. Jerry even before I got in the business.”

L.A. wrestling legends Freddie Blassie and John Tolos also made an impression on young Prichard. “Freddy (Blassie) came in for a match with Tolos and that is where I met Freddy the first time in L.A.” said Prichard. “He was very, very nice, I think he was in for a week. By 1980 he was not wrestling a whole lot, but he and Tolos had the special match in L.A. John Tolos was a trip. John was cool and I worked with John a lot. I am 20 years old and he is knocking the sh– out of me with his chops. I told Al Madril who was there and he said, ‘You should tell John that they hurt.’ Hell no, I’m not going to do that. It was cool working with those guys because I remember reading about them growing up and then I’m in the ring with them. L.A. was a great experience, but I didn’t make a lot of money and had a good time.”

It was in Los Angeles that Tom Prichard truly knew that wrestling was his calling. He was able to work with a diverse roster of international stars, aging legends and rising youngsters. Prichard could not get enough of the sport of professional wrestling. “It was all I wanted to do, I was consumed by it and suddenly I am in the dressing room with these guys that I was consumed with watching and learning about,” said Prichard with passion. “I was a student of the game.”

Prichard had a few runs as half of the Americas tag team champions with partners such as a young Chris Adams, Al Madril, and Apolo Jalisco. As 1982 came to an end the Los Angeles territory stopped running and very soon the WWF was promoting shows in the area. Tom Prichard took his new found wrestling knowledge that was passed down to him by his wrestling family and set out on an adventure that would see him compete in other territories across the United States and earn his “doctorate” of wrestling.