Mad Dog: The Maurice Vachon Story tells the tale of an unlikely Quebec and Canadian hero — an iconic wrestling madman character — who overcame a nasty violent streak in his youth, personal near-death accidents, marital and family tragedies, while remaining one of the business’ nicest and most loyal men. Authors Betrand Hebert and Pat Laprade are able to explain Quebec’s unique culture while unflinchingly sharing of the flaws and faults of Vachon yet ensuring his love for his family and profession shines throughout.

Vachon’s story connects important phases in the history of the Montreal wrestling circuits. His early influence on two major figures in the evolution of the WWF — fellow Canadians Pat Patterson and Roddy Piper — cannot be underestimated. In the early ’70s, his short-lived Grand Prix promotion with brother Paul (a promotion initiated by his childhood hero Yvon Robert Sr.) brought record crowds in a heated wrestling war against his the established star Johnny Rougeau. Then, far past his prime in the mid-1980s, he was acquired to help garner fan support during the WWF takeover of the Montreal territory. Even after retirement, and much to his surprise, Vachon built a cult following as a man of the people, which grew to unbelievable proportions after surviving yet another, incredible accident. 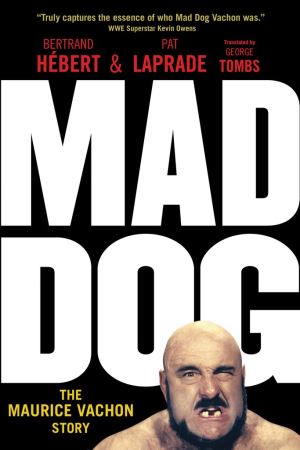 Growing up Vachon was the first truly frightening heel I remember as a kid; I was about seven years old when the AWA returned to my local Winnipeg market (where he eventually lived in the early 1980s after winning the tag titles, and people still talk about his antics around town to this day). Vachon’s growling guttural interviews, simultaneously terrifying and remarkably articulate, would make small references to growing up in a tough “Dog-eat-Dog” world, but fans would have had no idea how serious he was.

A child of the Depression, his father Ferdinand was a straight-laced police sergeant making $150 a month raising 12 kids. Cultural divisions were drawn between labour-class Quebecois “Pea soupers” against upper crust “limeys”, and school brought old-school physical discipline, for reasons as dumb as Maurice using his left hand to write. Vachon reacted with primal emotions.

“He frequently wore a white shirt, spattered with some other kids blood, and some of his own too … it seems clear the Vachon Gang treated beating up English kids as a sport.” This progressed until at age 13 he pummeled an adult father of another kid who wronged Paul, then Vachon beat him some more, afterwards realizing he had a temper problem. The violence was a stark contrast to his hobbies of collecting stamps and training carrier pigeons.

An arrest for messing with cargo trains forced his father to send him a message. By fluke, the idea boxing lessons were replaced by wrestling training at the Montreal YMCA from a Canadian Olympic coach, Frank Saxon, which helped mollify Vachon’s distrust of the English. His aptitude earned him the Canadian national championship at age 17 and his first encounter with future AWA and NWA titlist Gene Kiniski. Early on his father took him to local cards showcasing “la p’tite lute” — the local lighter weight wrestlers — and Vachon maneuvered his way into briefly being a clerk for famed sportswriter Elmer Ferguson at the Montreal Herald.

In 1948 he suffered a screw job judges’ decision at the London Olympics, which spiraled him out of amateur wrestling medal contention. The crop of contemporaries at the Games who later entered professional wrestling included two future babyface rivals, Edouard Carpentier and Verne Gagne. But a lengthy return sailing voyage from the British Empire Games in New Zealand, where he was a gold medalist, provoked what became a long battle with the bottle.

Vachon’s return to Montreal found him back in trouble with the law as Montreal’s toughest bouncer for Montreal’s major crime boss, facing charges for beating up the son of a Premier, and finally being strongly advised he was smarter to pursue professional wrestling rather than taking a bullet for riling the wrong people.

It was refreshing reading stories of the territories big and small where Vachon honed his craft when the inevitable ceiling hampered his career at home, including Larry Kasoboski’s Northern Ontario ($350 a week!), an early heel team with Dory Funk Sr. in Detroit which led to runs in Texas, and being joined by his younger, much larger brother Paul “the Butcher.”

One of the highlights is a vivid recounting of the infamous Mabel prank in Stampede Wrestling on the Great Antonio, in which Vachon was a gleeful participant and putative murder victim. Stu Hart made great use of Vachon, who faced NWA World champion Pat O’Connor, and former boxing king Jersey Joe Walcott.

After a happy time with his family in Hawaii, he was booked to Oregon under promoter Don Owen where the Algerian Mad Dog was truly born, accidentally nicknamed in an interview by a famous rival. That was also where his friendship with Pat Patterson and life partner Louie Dondero began, and Vachon’s approval of their homosexual lifestyle certainly made things easier in a lot of ways down the road for them. Mad Dog’s path to worldwide fame continued as an $800 a week headliner in Omaha, graduating to AWA World champion and the first of a decade’s worth of his famous brawls and cage matches with The Crusher (Reggie Lisowski).

Back to Quebec, a burgeoning partnership with a greenhorn he took under his wing and renamed Baron Fritz Von Raschke was drawing like crazy until a rollover on an overnight road trip left him with a career-threatening fractured pelvis, and an instant divorce notice when his wife learned Vachon had a young girlfriend, who became his second wife after getting pregnant. A fantastic recovery led to being reunited with brother Paul for a remarkable 623-day reign as AWA tag team champions, as the top drawing team in the business. And another near death experience in a Minneapolis TV studio when Crusher accidentally stomped him while gigging, nearly severing an artery in the most famous (and goriest) scene ever on AWA TV. Of course, the resultant cage matches sold out around the circuit. Vachon also beat the snot out of a Winnipeg wrestling commissioner on that run.Having conquered other promotions, the Vachons set out to create their own. The tale of the rise and fall of Grand Prix and bringing a young Andre The Giant to North American rings, the heated head-to-head rivalry and (eventual partnership with) with Johnny Rougeau, and Vachon setting the Montreal attendance record at the Expo’s ballpark against Killer Kowalski is fascinating. As his career wound down, his son Mike briefly joined him on the road, and future AWA champion Rick Martel received a big boost from Vachon. A final heel run in the AWA led to a role as a character babyface and the spectacle of Vachon and longtime rival Gagne take the tag titles from the all-time great team of Pat Patterson and Ray Stevens, as well as a final chase for the AWA title belt against Nick Bockwinkel that drew a sellout. And an infamous airplane incident on the aptly nicknamed “Suicide 1.”

After his final bouts in the WWF during the national expansion and a return Montreal and the AWA, Vachon created a new career as a spokesman and media character, then was cut down by a car while jogging one early morning in Iowa near his Nebraska home and again almost dying after a misdiagnosis caused him to lose his right leg below the knee. The tragedy unleashed the love of two nations — Quebec itself and Canada, bestowed accolades, financial support and respect upon the undefeatable Maurice.

This extensive biography was originally published in French, and the translation has resulted in some odd phrases (being used “excessively” as a spokesman was meant as a compliment!). Readers should perhaps keep this in mind if at first they find the text stilted. Hebert and Laprade are both contributors to SLAM! Wrestling and have done a tremendous service by bringing the full picture of a Quebec globetrotter to the broader public.

Mad Dog: The Maurice Vachon Story lays open the turmoil and conflicts with his wives, painful separations with his broods of children, but makes clear that Maurice Vachon was at all times, a loving and caring man who wrestled his demons and emerged a unifying cultural figure in Canadian history, a true Hall of Famer in wrestling and life.

“DR.” MARTY GOLDSTEIN conducted the world’s first Workplace Safety and Health Study into Professional Wrestling, for the Manitoba government in 2003. He has worked with wrestling promotions in Kansas City, California, British Columbia, Alberta and Manitoba as a referee, commentator, agent, and producer, and is a long-time SLAM! Wrestling contributor.