Beautiful Bobby Dean, son of the great Lord Littlebrook, has died. According to sources, his death on September 2, 2017, was unexpected.

The family — real name Tovey — has set up a GoFundMe account to help with expenses.

“Beautiful Bobby Dean a well know wrestler, friend, father, son, and brother passed away yesterday unexpectedly,” reads the GoFundMe listing. “We are in dire need for funds to get the family through this. He is a single father of 7 children 3 of which still live at home and we need to support them. Please let’s come together as a community and support the Tovey’s.” 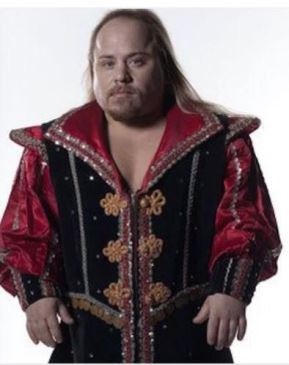 Following in the footsteps of his father, Bobby Tovey took to professional wrestling and traveled the world. On many occasions, he would wrestle against his brother.

Both Beautiful Bobby and Little Kato were recently a part of the Half Pint Brawlers troupe of little person performers that had a show on Spike TV.

Here’s the bio on Beautiful Bobby from the Half Pint Brawlers website:

Bobby is Kato’s little brother and lives in St. Joseph, Missouri. Bobby also takes an incredible amount of pride in the fact that his father was the pioneer of midget wrestling and Bobby proudly wears his father’s wrestling cape to all of his matches.

Bobby is just coming back from a motorcycle accident, which put him out of wrestling for two years. He has gone through three surgeries on his leg and now wants to get back into the ring to perform his “luchador” style of wrestling, which consists of high flying off the ropes.

In an interview with Mike Mooneyham of the Charleston Post and Courier, Steve Richardson (Puppet the Psycho Dwarf) recalled a stunt with Beautiful Bobby. “Bobby loves to jump bikes, so we got him a miniature motorcycle,” said Richardson. “He jumped a creature — I won’t tell you what it was — but we were down in Louisiana, so you can imagine what it is.”

Mike Santoyo Sr., who wrestles as Madd Mexx, posted on Tovey’s death on Facebook: “I have traveled , eat & roomed And even Wrestled this LEGEND in The RING.. A GREAT MAN , AN AWESOME FRIEND & incredible parent to all his kids . A GREAT PERSON ALL AROUND.”

Another little person star, Jacob Colyer, who works as Turtle, shared his recollections as well on Facebook: “My heart and mind are at a loss for words. I can’t help but feel sadness for the Tovey and Dube family. My friend Beautiful Bobby Dean, you will be truly missed. I will always reminisce the great times, shows, and events that worked in together. All of the crazy shenanigans and you bringing that margarita mixer with you to every show.”

Retired wrestler Shannon Hailey, like the Toveys, from Saint Joseph, MO, described a time that the family helped him out on Facebook: “Bobby Tovey you were one of a kind. I had the experience of getting to be on the road with Bobby and Little Kato back in the day when i was wrestling. Bobby was a stand up guy and was amazing in the ring. Lots of fun on the road. Bobby and Chris helped out my son a few years back and donated everything they earned that night. What an amazing couple guys they are!! My heart goes out to his children and all his family. Fly high Bobby! You will be missed by so many!”

Details are still emerging on Tovey’s death. A memorial services for Bobby Tovey will be on Sep. 9th at noon, at ROC Fellowship Church, 2606 Sycamore Ct., St. Joseph, MO.