Wrestling historian and author Scott Williams, who died last August, posthumously received the Jim Melby Award, which recognizes professional wrestling writing or historical preservation. In addition to being a Wrestling Observer Newsletter contributor, he co-authored autobiographies with the likes of Terry Funk and Bill Watts.

Jim Ross, who served as master of ceremonies for the evening, said Williams was “a true student of the genre.”

“Scott Williams was probably one of the most learned, passionate historians of our business that I ever met,” said Ross, who had been working on his autobiography with Williams at the time of Williams’ death. 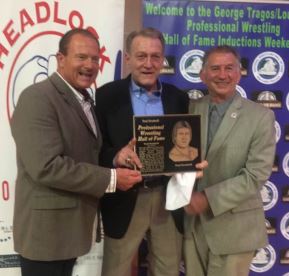 Hansen’s demeanor throughout his three-decade career earned him the Frank Gotch Award, which honors those who bring a “higher level of respect” to the business.

The former AWA Heavyweight champion used his time to acknowledge those who helped him throughout his career, including Terry Funk, Jack and Gerry Brisco and Bruno Sammartino.

“I just appreciate Jack and Gerry and all those people that came before me that were good enough to give me a little bit of rope, to hang myself sometimes, but also to make a name for myself,” Hansen said.

Magnum T.A.’s ability to transfer his professional wrestling career into public service earned him the Lou Thesz World Heavyweight Championship Award. Ross said that despite the greatness of past award winners, “no one has over come more challenges” than Terry Allen, better known as Magnum T.A.

“Sometimes through change in our lives, I think God gives us an opportunity to get stronger, or you can just run and hide and say, ‘I can’t fight anymore,'” Ross said. “Those words have never been uttered by Terry Allen.”

A car accident in 1986 that resulted in a broken neck effectively ended his wrestling career. But five months after the accident, he walked out of the hospital and chose to dedicate his life to “really making a difference.”

“The impact we have is just unbelievable that we don’t even know about,” Allen said. “People see us, pass us might not even know our names or where we come from… but they know that I’m not giving up. They know that I’m overcoming challenges every day.”

In a full-circle moment, Allen shared that a book about Dan Gable that his mother gave him as a child set the stage for his life’s journey.

“I read that book and something happened inside,” Allen said. “A passion, a desire to be something bigger than I ever imagined just swelled inside me… I had in a period of six years a career that people are talking about 30 years later.”

Van Arsdale’s ability to transition his wrestling skills to mixed-martial arts garnered him the George Tragos Award, which according to Ross, “exudes toughness.” This year’s honoree is “a world-class MMA fighter recognized locally as one of the great coaches in all of MMA,” Ross said.

Van Arsdale, a three-time All-American, spoke of his parents and the morals they instilled in him during his speech, noting how much he looked up to his father.

“I can’t even believe I’m here, to be honest with you… You don’t really think about things like this when you’re out there competing,” Van Arsdale said.

The evening ended with the two honorees, Rhodes and Orndorff. Ross accepted Rhodes’ award on behalf of the Rhodes family. The American Dream, who died in 2015, was inducted posthumously.

“There’s no way in hell I can come up here and even remotely give you any verbiage that would compare to what Dusty would say if he was here,” Ross said.

However, Ross made the connection that both Rhodes and John Wayne died on June 11.

“Their number was called, and there’s a reason Dusty and John Wayne both left of us on June 11 because Dusty was kind of the John Wayne of pro wrestling,” Ross said. “He loved being that character.”

“Mr. Wonderful” Paul Orndorff accepted his honoree award alongside one-half of the Killer Bees, Brian Blair, who he considers like a brother. The University of Tampa football star touched on his upbringing and being drafted by the NFL’s New Orleans Saints, but ultimately circled back to emotion and his desire to be at the top of the game, regardless of what the game was.